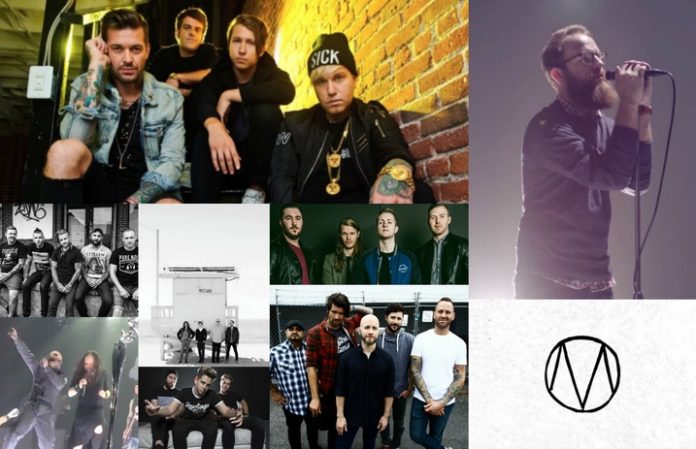 1. The Maine shared some cryptic new photos on social media, and everyone is trying to figure out what it could mean. What do you think they’re up to?

This comes after their 8123 Fest lineup announcement. Along with the Maine, the Summer Set, Beach Weather, the Technicolors and more are slated to perform.

2. British rockers You Me At Six are continuing their Night People album campaign with the single, “Plus One.” Have a listen below!

3. I Prevail dropped a new song from their forthcoming record, Lifelines, which is due out Oct. 21 via Fearless Records. Did you hear that the band already have a gold record for their cover of Taylor Swift’s “Blank Space”… before their debut record has even released?

Listen to “Come and Get It”:

4. Boigirl unveiled the third video in their series on AP’s Facebook this week. Check out pop-rock/post-hardcore trio’s “Dream”:

5. Jimmy Eat World’s new album, Integrity Blues, arrives Oct. 21. As you wait (im)patiently, have a listen to their new track, “You With Me”:

The band’s new album, Chaos, is available for pre-order here. Check out their tour dates below!

7. The Wonder Years’ Dan “Soupy” Campbell got married to his long-time girlfriend, Alison, on October 1.

Check out the adorable photos below:

Yesterday was the most amazing wedding we could have ever asked for. I'm sure I'll have a deluge of photos still to come but for now, here's one @etobinetobin took. Thank you to everyone who made it perfect. We love you all to the end of the earth and back again.

so excited for this sneak peek of our photos by @jessicacooperphotography. she absolutely killed it and was so much fun to work with. can't wait to see the rest. I CANT STOP CRYING.

8. Even though Fantastic Beasts and Where To Find Them isn't coming out for another month, we got a preview of what the official score of the movie is going to sound like on October 7.

While the beginning definitely sounds eerily similar to “Hedwig's Theme”, it quickly takes a turn and shows viewers that this won't be the same universe that we're used to after eight Harry Potter movies.

to celebrate the 10th year of his Dear Jack Foundation, Andrew McMahon announced the annual benefit. This year, he’ll be giving fans an extra treat and be joined by members of his former bands — Jack’s Mannequin and Something Corporate. Read Jack’s statement below:

”It's with great excitement that I announce the 7th Annual @DearJackHQ benefit. Please join me on November 11th at The Observatory in Santa Ana California to celebrate @DearJackHQ's 10th year serving the Adolescent and Young Adult cancer community. To help me recognize this important milestone I will be joined onstage by members of the Wilderness band, Jack's Mannequin and Something Corporate. This will be a special night, spanning more than 16 years of music with the friends that helped me bring it all to life. Proceeds from this show will go to support DJF programs and partnerships. Tickets go on sale this coming Monday at 10am PST – more info on andrewmcmahon.com”

The band took to their Instagram posting six studio photos with the hashtag #marsiscoming2017. Lead singer, Jared Leto can be scene in the recording booth—so exciting!

11. We can stop listening to that Korn + Corey Taylor track “A Different World.” It now has a creepy music video. Watch:

Here’s what frontman Parker Armstrong had to say about “1971”:
“’1971’ is about learning lessons from humanity's low points. Different forms of oppression seem to stay alive cross-generationally. When and where one is born never justifies carrying on hate for the sake of tradition. We all have potential to make a positive impact in the history books of tomorrow. This song isn't so much a cry for political correctness, but more a pursuit of personal convictions in sorting out the genuine from ghosts of our past.”