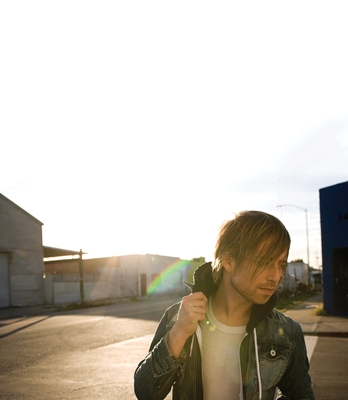 We became fast friends with Bryce Avary & Co. when the Rocket Summer co-headlined the second annual AP Tour in 2008. Guess the feeling’s mutual, since on his new album, Of Men And Angels, there are two indirect shout-outs to our magazine. We’ll let Avary explain…

During the 2008 AP Tour, each night, Bryce Avary would perform one song without his band, by looping each instrument part onstage. The song was previously unreleased and had a particularly catchy hook. When we first heard “You Gotta Believe,” music editor Scott Heisel realized something sounded strikingly familiar.

“You’re the only person who has talked to me about that,” says Bryce Avary, laughing when we ask him if the music did indeed end up on his album. “That’s so crazy. But yeah, I was writing that song and I was trying to figure out a cool bridge/middle A part, and I started jamming that freakin’ loop thing from the AP Tour. And I was like, ‘Dude, I wonder in anyone’s going to catch this.’ And nobody’s really caught it.”

While including a loop born on the AP Tour is a bit of a reach when it comes to a direct connection, Avary did include AP in the lyrics. After the initial recording for Of Men And Angels was completed in early spring 2009, Avary entered Willie Nelson’s studio in Austin, Texas, later in the year to lay down a few new ideas.

“I recorded this song called ‘Japanese Exchange Student,’ which is just totally different,” Avary explains. “The lyrics are, ‘I might as well be a Japanese exchange student/Because people want to know me right when I show up/And then the thrill wears off and I’m all alone.’ Until somebody like Paul McCartney or Beyonce comes to town and somebody calls me and thinks I can get them on the guestlist or get them a ticket, and I can’t because I don’t know them, just like they don’t me, and how lonely it is.

“Actually, there’s a reference to AP in the song,” Avary continues. “There’s a line that says, ‘Last year I got the cover/And my phone wouldn’t stop ringing/They called more than my mother/And that is saying something/But lately it’s been quiet/My phone just picks up dust calls.’” It’s all about who you know, but you don’t really have to know anyone. AP kinda gets a little nod.”