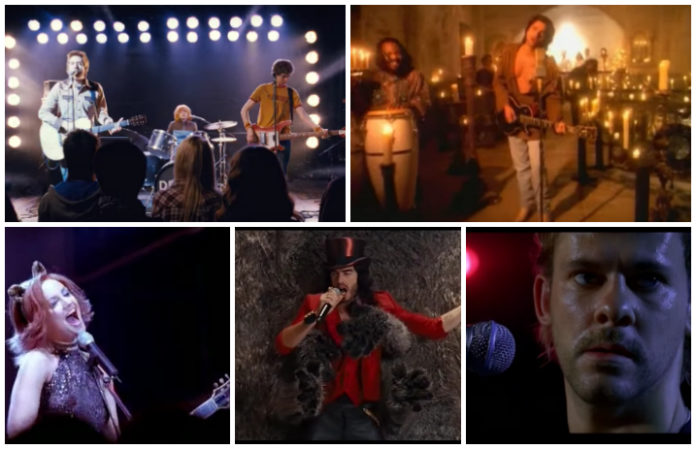 Whether they’re musicians in disguise, actors paid to pretend or even an actual band, plenty of fictional music groups have graced big and small screens. From Jesse And The Rippers to Sex Bomb-Omb, check out some of the best below.

Jesse And The Rippers (Full House)

Jesse Katsopolis, portrayed by John Stamos, was the cool uncle to the Tanner sisters on Full House. He fronted Jesse And The Rippers, topping the fictional charts in Japan in 1992 with their the Beach Boys cover, “Forever.” The band reunited in a makeshift Smash Club on Late Night With Jimmy Fallon in 2013 and again onscreen in the 2016 Netflix reboot of the show, Fuller House.

Almost Famous is Cameron Crowe’s semi-autobiographical tale of a teenage journalist writing for Rolling Stone while out on the road with a band by the name of Stillwater. The fictionalized band was reportedly inspired by Crowe’s real-life experiences with the Allman Brothers Band, the Eagles, Lynyrd Skynyrd, Led Zeppelin and more.

Roadies followed those who keep it together behind the scenes as roadies (portrayed by Machine Gun Kelly, Luke Wilson, Carla Gugino and more) for the Staton-House Band. While they may have a real website with tour info and album release details, they are unfortunately not a real band. Despite this, the Cameron Crowe-created Showtime series did have actual artists such as Lucius, Halsey, Pearl Jam’s Eddie Vedder and Phantogram pop on tour throughout the show.

Begin Again stars Keira Knightley as singer-songwriter Gretta James, who ventures to an open mic after a fallout with her songwriting and romantic partner, played by Maroon 5’s Adam Levine. Here, she is discovered by a struggling record exec (Mark Ruffalo) who convinces her to record a live album on the streets and rooftops of New York City.

The Princess Diaries; GARAGE BAND by elkblood
Granted, Fly Paper was actually just Rooney in disguise, as frontman Robert Schwartzman appeared on screen with his real band when filling the role of Anne Hathaway’s geeky friend-turned-love interest in 2001’s The Princess Diaries. Regardless, the band pumping out “Blueside” for practice in the auto shop is an iconic scene amongst 2000s teen movies.

Downtown Sasquatch (Degrassi: The Next Generation)

Before he was topping charts as Drake, Aubrey Graham was playing guitar in the fictional Degrassi: The Next Generation band Downtown Sasquatch. The TV show’s favorite bad boy, Craig Manning, fronted the band, and he was portrayed by Jake Epstein, who later went on to snag a lead role in Green Day’s American Idiot musical.

Set in 1980s Ireland, Sing Street is the coming-of-age story of a teen boy who starts a band in order to garner the attention of his aspiring model love interest so that they can cast her in their first music video.