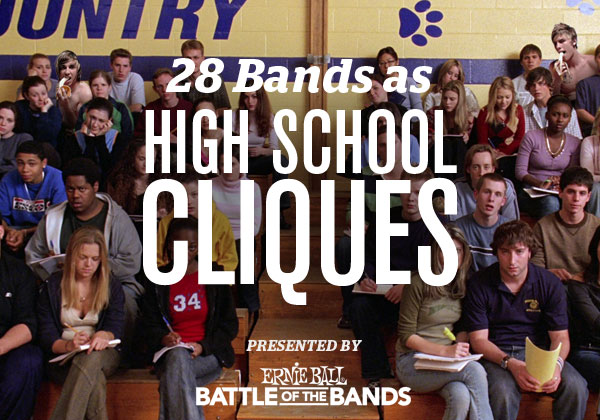 If there’s one thing high school teaches us, it’s that everyone experiences those four years differently. However, there is one thing everyone who’s attended high school has had to deal with: cliques. There’s a reason movies like Clueless, Mean Girls and 10 Things I Hate About You all feature a scene where they break down the student body for the hapless new kid in town. Sure, they’re funny (the Persian Mafia! Girls who eat their feelings! Girls who don’t eat anything!), but they’re also surprisingly accurate, reminding us that cliques aren’t just a part of high school but a part of life. Look no further than this music scene: You’ve got your punks, your goths, your metalheads—the list goes on. But before your favorite musicians were, well, your favorite musicians, they were high school students just like everyone else was at one time or another. What cliques did they belong to? Well, we could ask them, but making it up is way more fun. Here are 19 bands and the cliques they would belong to if Alternative Press High School was a real school.

Most likely to: streak across the football field during the Homecoming game halftime show

Most likely to: organize a food drive

3. The guys who enjoy the “greener” things in life: Man Overboard, the Story So Far, the Front Bottoms

Most likely to: know who sells the best weed

Most likely to: show up late to their graduation after a night of debauchery

5. The theater/band/otherwise artsy kids: Set It Off, Crown The Empire, Panic! At The Disco

Most likely to: stage a flash mob during lunch

Most likely to: be the talk of the school for a solid three days after their arrival

7. The jocks: Stick To Your Guns, This Is Hell, Throwdown

Most likely to: know where the weight room is

Most likely to: be voted prom king

9. The preps: The Summer Set, the Ready Set, William Beckett

Most likely to: own multiple pairs of Sperry Top-Siders

10. The guys your mother warned you about: Masked Intruder

Most likely to: end up in summer school because they missed half the school year due to a stint in juvie

This article was sponsored by Ernie Ball Battle Of The Bands.