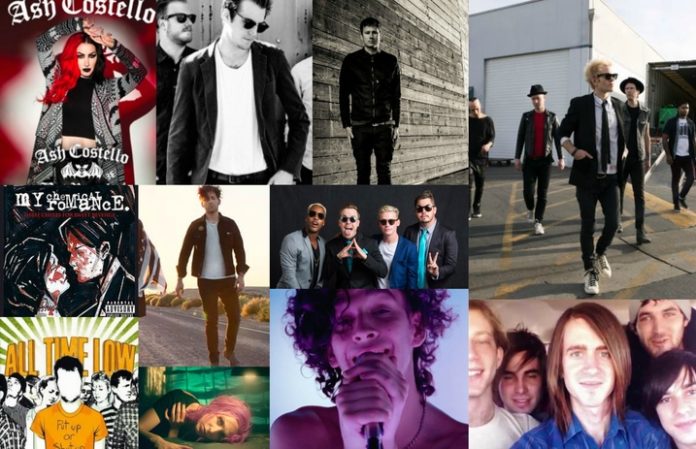 1. Max Bemis of Say Anything and Chris Conley of Saves The Day will be embarking on the first ever Two Tongues Tour in anticipation for their new album, which is scheduled for this fall. Dates and a clip of a new song:

2. Icon For Hire dropped a new music video for their track “Supposed To Be.”

Here’s what frontwoman Ariel Bloomer had to say to AP: “‘Supposed To Be’ was inspired by one of our listeners, who told us she didn’t know who she was without her depression. We wrote this song for her and everyone else who feels that way—and it’s become an anthem for our fans. The video features letters written by our fanbase, and we’re so excited to be bringing this song to life!”

Watch “Supposed To Be” here:

3. Here’s a behind-the-scenes look of Sum 41’s awesome music video for “Fake My Own Death”:

4. Tom Delonge will be featured on Ernie Ball’s Pursuit of Tone docuseries on AT&T Audience Network. Delonge talks about his early music experiences, Blink-182 and Angels & Airwaves and his current projects. The episode airs at 8 p.m. ET on Aug. 19. Watch a trailer here:

5. Ash Costello’s clothing brand is now being sold in Hot Topic stores. Check out her awesome post about the news and grab the line here. Congrats, Ash!

My clothing line @batroyalty is NOW IN @HOTTOPIC STORES!!! I'm so excited that now you guys can try them on and see them in person! There's a ton of new items including the new and improved Be Afraid shirt, leggings, sweaters, dresses, tops and more! Just find the Bat Royalty/Ash Costello sign! This line is exclusively for hot topic so the only place to find it is in hot topic stores or hot topics website. On a personal note you guys….. I started shopping at hot topic when I was 13, and back then it was basically the ONLY place for alternative clothing. I always dreamed of having my own clothing line, even at 12 I was making my own clothes for school. I never thought that dream would become what it has! I know it seems cliche' to say, but truly work hard and never give up and never let anyone tell you that you can't do something if you know in your heart it's what you're meant to do. Thank you to everyone who has been supportive in this adventure! Thank you to @ironfistclothing #ironfirstclothing for believing in me. @the_speirs and @englishvoodoo20 for being two amazing dudes!

7. Matty Healy of the 1975 tweeted about his love of Joyce Manor:

I love @JoyceManor so much

@Truman_Black the feeling is mutual!

8. Saosin’s Anthony Green premiered a new song from his forthcoming solo album Pixie Queen. Listen to “From What I Understand”:

10 years ago today, we released 'Put Up Or Shut Up', and what a ten years it's been! https://t.co/HJDtGbFxMS pic.twitter.com/Z2BTT6EtSe

10 years since PUOSU! I can't even begin to describe how grateful I am. Thank you guys for everything. pic.twitter.com/WgZo8UFLDj