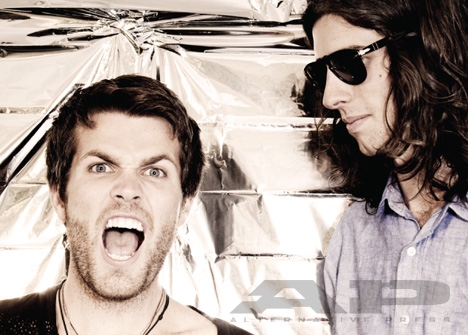 Behind the scenes with 3OH!3 (AltPress.com exclusive) from Alternative Press on Vimeo.

With a successful first album under their belts, 3OH!3’s NATHANIEL MOTTE and SEAN FOREMAN can joke about the supposed secrets of producer Matt Squire’s SOMD studio. “It’s an underground lair, with lava and lasers and such,” claims Motte. “I can’t tell you the exact location, or I’d probably have to kill you.”

For the record, Squire’s studio is in Beltsville, Maryland, and it’s where he and 3OH!3 recorded most of the Boulder hip-hop duo’s Want last year. But Motte and Foreman now acknowledge that when they first joined forces with Squire–best-known for overseeing huge hits like Boys Like Girls’ eponymous 2006 debut and Panic At The Disco’s 2005 dance-pop smash A Fever You Can’t Sweat Out–it wasn’t entirely a joking matter. “Basically, I fear to lose my own creativity. That’s my biggest fear,” says Foreman. “I know a lot of people, especially in [hip-hop], have lyrics written for ’em, or they have beats written for ’em. And I think it’s weird to have your name on it if you didn’t do it yourself. That’s kinda shitty. We definitely don’t wanna fall into that trap.”

Squire has a reputation for being a hands-on producer, but he quickly put 3OH!3 at ease. Six months before producing Want, he’d helmed a demo session because he believed so strongly in the band. There wasn’t much he wanted to change: “I wanted to help them develop their sound and push a lil’ further,” he says via e-mail. “We explored a lot of melodic and structural territory that expanded their sound.”

Both Foreman and Motte were huge fans of Squire’s new wave-styled work with Panic. (“That record is completely undeniable,” says Motte.) But Squire says there was no intention of trying to recapture the blend of programmed and live sound he crafted on Fever. “Every record and artist I work with is very different,” he says. “If there was anything that carried over, it wasn’t a conscious decision.” Instead, he worked hard to get across the freewheeling feel of 3OH!3’s live show. “I think that their lyrics are full of that personality and humor. So it was really all about capturing the right vibe in the vocal. The falsetto in ‘Don’t Trust Me’ is a perfect example.”

Whatever doubts the duo might have harbored early on about outside producers are long gone. “Basically, I look at working with a producer as being an apprentice to someone who knows a lot about engineering, or whatever,” offers Foreman. “It’s all about teamwork.” And the secrets of Squire’s studio, meanwhile, will stay safe with his apprentices. –Dan Leroy