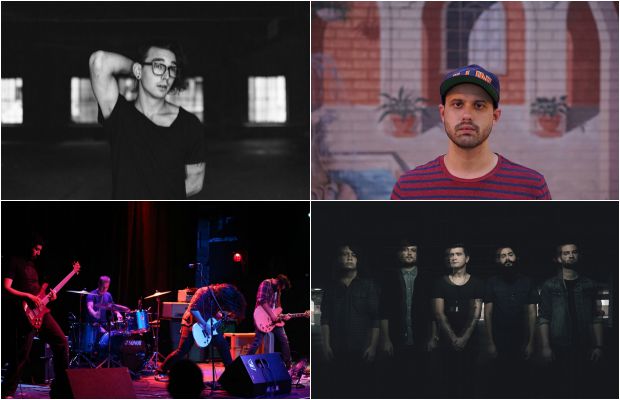 Welcome to the fourth installment of our new AP&R online series. Some of you may be thinking, “Wait. Isn’t this usually in the magazine?” Yes, it is, but we’re upping the ante with this section in our new issues by giving your favorite among our scouted unsigned artists an opportunity for a larger print feature in AP!

NOW PLAYING: Everybody Else

Rocks like: The Marked Men, The Menzingers, early Man Overboard

Horrible Things is Tim Reynolds. Launched in 2009, the project features a rotating cast of live players, but, in recording, Tim plays every instrument and writes every part. “I was a freshman in college in a new town and figured it’d be the best way to make friends,” Reynolds explains. Based in Champaign, Illinois, the band got its start by tapping into the local house show scene. “I don’t really like performing that much, so I’ve always preferred just having fun and playing low-key shows,” asserts the forthright singer, who also hoped Horrible Things would help fulfill another creative desire: “As a graphic designer, I also wanted an excuse to make merch designs.” The group definitely lands in the realm of pop punk, but Tim’s minimalist approach and earnest lyricism brings a raw, more underground element to their sound. Celebrating the recent release of Horrible Things’ sophomore LP, Everybody Else, Reynolds plans to relocate to Chicago in the fall, where he will recruit a new live lineup before hitting the road.

Self-proclaimed dark pop band Mount Tyrant formed by happenstance, when four of the five members met while working together at a screen-printing shop in Dallas, Texas. “Everything just clicked perfectly between all of us and we went full speed from there,” says vocalist Hunter Fitch. Infusing ambient, electronic tones and blending elements of indie rock and alternative, the group are not shy about their unabashed love for pop music; despite their darker approach, they cite Taylor Swift and One Direction as two artists they “most surprisingly and probably most frequently” find inspiration from. Though they’ve only been around for a short time, Mount Tyrant have quickly found an audience, making a point to connect directly with anyone online who’s ever supported their music. After Kellin Quinn met them, the Sleeping With Sirens singer featured Mount Tyrant on his We Like It Loud podcast, as the first “Loud Artist of the Week.” Despite the fact that their debut EP, Young Blood, just came out in May, the band are already looking ahead. “We are scheduled to head to Colorado in October for a week to lock ourselves in a cabin and write another release,” announces Fitch. Expect tours to follow.

ROCKS LIKE: Team Sleep, MONO, Explosions In The Sky

Before forming Isles, guitarist/vocalist Ivan Torres was known mostly for singing in metal and death metal projects around the Bay Area. “[I] wanted to take a bit of a hiatus from that role, and felt that instrumental, post-rock music was the most alluring endeavor, as it allowed me to be just as expressive, both creatively and emotively, even without lyrics,” Torres explains. Taking influence from atmospheric, ambient, and largely instrumental post-rock and post-metal, Isles originated as a solo project in 2011. It wasn’t until the 2013 release of debut album Spaces that Ivan recruited a full band, which now includes Dev Bhat (guitar, samples), Daniel Macias-Bernardo (bass), and Evan Massi (drums). The group was only supposed to play a one-off show. An overwhelmingly positive response led to Isles’ reformation as a proper band, and they’ve been playing around the Bay Area, opening for national acts and building a following ever since. The eclectic group are set to make their reintroduction this fall, with the upcoming release of their first full band effort Bending Light and plan to tour and continue writing immediately after.

Rocks like: Into It. Over It., American Football, Taking Back Sunday

“I've been writing music since before I can remember, but I launched the project YØUTH last year, after recording a song called ‘Breathing Easy’ with a brand new sound and new name in an effort to rebrand my art in a more appealing way,” clarifies singer, songwriter and multi-instrumentalist Julian Dente. A lifelong obsession with music and playing various instruments in bands throughout high school led Dente to release an album under his own name at 19, but, after a year of touring in support, he decided to trash the concept and start from scratch. A resident of Nashville, Tennessee, YØUTH has found an audience in the city’s budding underground punk, emo and indie scene. Though his debut EP Start Again is still brand new, it’s already receiving national attention. “I grew up in a house full of great music, so my influences span a wide spectrum of all genres,” explains Julian. His love of ’90s indie rock and emo, technical, multi-instrumental prowess and ability to balance earnest teenage nostalgia with the darker themes of navigating the hurdles of being a twenty-something, helps YØUTH craft a unique voice. Already hard at work on a debut full-length, expect new material and lengthy tour plans from YØUTH next year.

10 metal covers of pop songs whose awesomeness will not be...