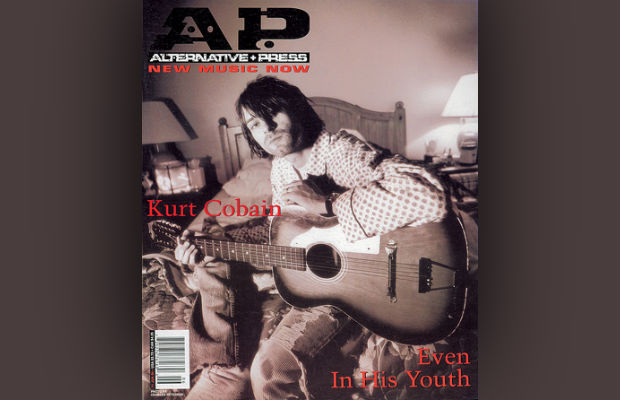 Last week’s acknowledgments marking the anniversary of Nirvana frontman Kurt Cobain’s passing included displays of respect and honor that crossed generations, as well as nostalgic sentiments from middle-aged folks bemoaning “how things used to be.” As a member of that specific demographic, I prefer to run away screaming from “good ol’ days” crap because it’s a psychic narcotic that keeps people from seeking out what is new, vital and fecking awesome. We all know there was an underground music scene happening decades before Nirvana’s success, and it’s been thriving at various levels 20 years after Cobain’s death. So instead of rehashing yet another “Our Top 27 Nirvana Songs” listicle or riding in the jaded parade on a float with BETTER BEFORE YOU WERE BORN spelled out in carnations, I want to thank Cobain—and Krist Novoselic and Dave Grohl—for a few enduring gestures they put out into the greater rocking body politic.

1. THE CULTURAL CLEANSING.
During much of the ’80s, America was deep in the throes of generic FM-rock fodder and pop-metal made by hair farmers. When Nevermind—and the now-classic video for “Smells Like Teen Spirit”—entered into the country’s pop-culture consciousness, things started to happen. In his March 1999 cover story (AP 128), Rob Zombie recalled how “at the height of the glam scene, the sidewalks were packed with people going to [famous metal clubs] the Rainbow or to Gazzari’s. Two weeks later, Nevermind came out, and it was a ghost town. Gone. Overnight.” A few years later on an episode of VH1’s Where Are They Now?, Mike Reno, the cloying frontman for prancing Canadian red-leather-pants models Loverboy acknowledged that “Kurt Cobain’s negative lyrics killed my career.” The legend goes that allegedly White Lion guitarist Vito Bratta was instructed by suits at his label to change his playing style in order to compete with the cultural zeitgeist Nirvana and the Seattle underground had triggered, so he walked away from music. Nirvana helped reduce the inane excess of the crème rinse conditioner hordes into simplistic Trivial Pursuit questions. For that reason alone, I dropped $40 for the In Utero 2013 mix during last year’s Black Friday Record Store Day.

2. WALKING THE WALK.
We all applauded when Cobain was on the cover of Rolling Stone wearing a hand-printed shirt that read Corporate Magazines Still Suck. We loved how Nirvana’s set at the 1992 MTV Music Awards was positively shambolic, with Novoselic braining himself with his bass, Cobain trashing his gear and Grohl taunting Guns N’ Roses mouthpiece Axl Rose over the mic after the two bands had an altercation backstage. We fell over our lower jaws the following year when their Unplugged set showed the depth of their musicianship in ways

the world never saw. Their next album, the Steve Albini-recorded In Utero, was even noisier (“Radio Friendly Unit Shifter”), heavier (“Heart-Shaped Box”) and more melodic (“All Apologies”) than the record that got them to that point. Nirvana played arenas and had the joyously grating Japanese act the Boredoms to open, instead of having some shitty “McAlternative” band pay-to-play on the tour. This wasn’t arrogance: These assorted gestures put the rock world on notice that ethics and aesthetics were the reason these guys wanted to play music in the first damn place. Which reminds us…

3. THE HISTORY LESSONS.
You know how successful bands will give their buddies’ bands a leg-up into the world, despite said groups being as interesting as watching cereal soften in milk? Well, Cobain took his fan-boy crushes to a new level when he suggested to movers and shakers at the DGC imprint of Geffen to reissue three records by the Raincoats, the British post-punk, proto-riot-grrl outfit, 12 years after their initial release. Cobain was also a huge fan of the Scottish pop group the Vaselines (Nirvana covered their songs “Molly’s Lips” and “Son Of A Gun”) and used his considerable influence to get former Vaselines singer Eugene Kelley’s next band Eugenius a deal in America, culminating in 1992’s Oomalama. Sure, neither Raincoats reissues or Eugenius made bank the way Puddle Of Mudd did for that Durst guy. But like Cobain knew, that was never the point in the first place.

4. THE CONTINUING INFLUENCE.
Many armchair rock historians have posited that the late-’90s/early-’00s rise of nü metal practically erased the underground zeitgeist that Nirvana came up through. There were diluted versions of the trio’s fury and some other ones that never had a chance to thrive. But Cobain/Nirvana’s spirit will be felt by future generations. Like right now: This month, the Richmond, Virginia-based indie label Robotic Empire will be issuing a tribute album, In Utero: In Tribute, where all the songs from the band’s final studio album are covered by such talents as Circa Survive (“Scentless Apprentice”), Thursday (“Rape Me”), Ceremony (“Tourette’s”), Young Widows (“Dumb”) and These Arms Are Snakes (“Heart-Shaped Box”). Ask yourself if Candlebox would ever inspire such quality inspiration, and then wait in line on Record Store Day (April 19) to get one of these for your collection. alt