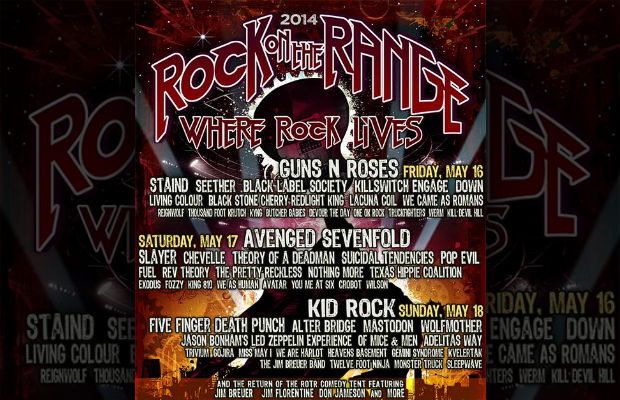 Smell that? No, it’s not the smell of napalm in the morning; it’s officially festival season! As a proud sponsor of this year’s Rock On The Range festival, taking place May 16-18 at Crew Stadium in Columbus, Ohio, we felt it was important to highlight some of the finest talent on their schedule. Sure, we could recommend Avenged Sevenfold, Slayer and Guns N’ Roses, but if you really need us to tell you to watch those bands, you’re kinda hopeless. Instead, we’re taking this opportunity to shine the light on some of the lineup’s hidden gems. Mark their set times on your arm with a Sharpie, and we’ll see you in the pit!

PLAY: Friday, May 16
AT: 1:45 p.m.
STAGE: Jägermeister
Do you know how far Örebro, Sweden, is from Columbus, Ohio? Truckfighters do, as they’ve made the trek from that far-off locale just to be here. (It’s 4,160 miles, by the way.) They’re pretty much Sweden’s version of Queens Of The Stone Age, and they have only toured America once before in their near 15-year career. See ’em now or regret it later.

PLAY: Saturday, May 17
AT: 12:40 p.m.
STAGE: Jägermeister
We all know Every Time I Die party hard, but do you ever find yourself wishing you could party even harder? The dudes in Wilson are here to scratch that itch, with a cock-rock-meets-metalcore sound that, yeah, has been done a few times before—but has it been done this well?

PLAY: Saturday, May 17
AT: 4:35 p.m.
STAGE: Ernie Ball
We first profiled Nothing More in our 100 Bands You Need To Know special earlier this year, and their new single is a solid burst of heavy, creative alt-rock. (Skip to about a minute into the above video to really get your heart rate going.)

PLAY: Sunday, May 18
AT: noon
STAGE: Jägermeister
We’ve been in Spencer Chamberlain’s corner for the better part of a decade, first through his years fronting metalcore champions Underoath and now through his more industrial rock-leaning new project, Sleepwave. They’re coming off a completely sold-out tour opening for the Used and Taking Back Sunday, so expect these guys to be on the tops of their respective games when it comes to live performances right now.

PLAY: Sunday, May 18
AT: 5:40 p.m.
STAGE: Jägermeister
This French prog-metal band have been tapped to open tours for everyone from Mastodon to Metallica. Odds are, this band will draw the most members of other bands playing Rock On The Range to check them out. Be a part of that crowd, won’t you?