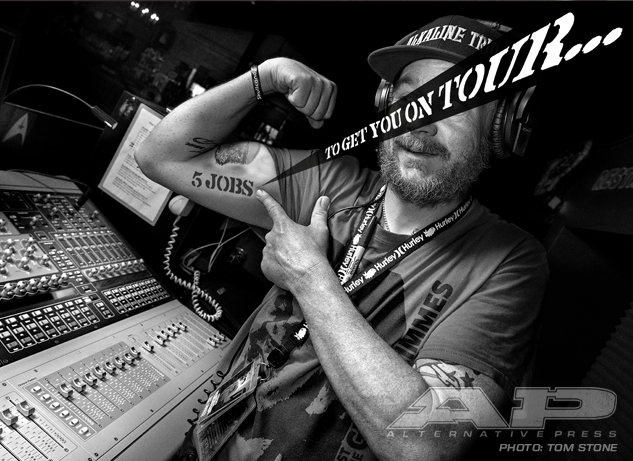 No one ever said you had to play an instrument to go on tour. In fact, you don’t even have to be in the band. There are plenty of job opportunities out there that don’t involve performing and— surprisingly—can be more lucrative. Whether it’s a tiny band playing basements or a gigantic act playing stadiums, there is always a need for crew.

For those unfamiliar, here are a few of the standard crew positions:

There is more to doing merch than an excuse to sneak into shows for free. Starting out with basic concepts like handling money, organizing inventory and displaying shirts can lead to an actual career. You’ll be planted at a table for the whole night other than running to the van or bus to restock your inventory, so you have to be OK with killing time. iPads and books are a big help. Keep yourself entertained, but when someone walks up make sure you’re paying attention and help them with whatever they need. It’s not all just transactions with customers, though. You’re also protecting the band’s money, so keep an eye out for thieves. The merch person is constantly keeping tabs on what is sold and has to use logistical thinking as to what needs to be reordered and where, as well as brainstorm ways to make more money for the artist. Bigger bands hire Merch Managers who will have other people vend for them so they can handle all of the accounting, logistics of packages, reordering, etc.

How to get the job: Help out your local friends for free, set out a tip jar to make extra money. Then if you’re lucky, take any opportunity you can to go on tour and network, network, network. If you’re good at your job people will take notice, and if you don’t suck as a person they’ll want you around.

The tour manager is arguably the most important part of the operation. The job requires you to speak on behalf of the band and make sure each show and—you guessed it—tour runs smoothly. Responsibilities include everything from waking the band up in the morning and setting bus call at night, to getting money from the promoter and making sure the band isn’t getting screwed. The role extends to a personal level by tending to each band member's needs, adapting to their personalities and answering the same questions from everyone everyday. I highly stress that last point. A lot of tour managers get their start from being close friends of the band, but as the artist grows in popularity, the tour manager gets more responsibility and a reputation.

How to get the job: Having experience with numbers, percentages, spreadsheets and quick problem-solving skills are an easy way to get into this world. Again, try it out for a friend’s band for free and go from there.

People go to shows to hear music played in a live setting, which makes this position so important to a crew. At a certain level bands will bring their own FOH person, but many small to mid-sized bands have to rely on the local person the venue provides. Regardless of musicianship and talent, a band’s fate is in the front of house engineer’s hands—so don’t piss them off. This job requires a soundcheck before the show to get things dialed in while keeping in mind the room may sound completely different once it’s packed with people, preparing the stage before a band’s set, running things during the set and tearing down after. You need to be focused, have a good ear and, like tour managers, possess natural problem-solving skills to make the show go off without a hitch. A Monitor Engineer does all of this, but only for the monitors on stage that the band uses to hear themselves.

How to get the job: This position requires a history with running sound and an education of some kind. Build your resume with venues and bands you’ve worked with or earn your stripes by shadowing with a professional or going to school.

A tech is someone designated to handle one or more instruments during a show. Loading and setting up gear, restringing guitars, putting fresh heads on drum kits, tuning everything before or even during the set and having the know-how to fix freak accidents as quickly as possible are just a few traits these people need to land the job. The bigger the artist, the more techs a band will have. Sometimes the tour manager will be on stage and double as a tech. You have to be on your game because a major mess up can lead to you losing the job. Know everything you can about your designated instrument and be ready to solve any problem that comes your way. If you love the instrument this is the perfect job for you. Ex-band members also excel in this position.

How to get the job: Put out feelers to your friends’ bands and see if there are any available jobs. Stick with people you know then branch out once you’re comfortable enough to tour with strangers and prove yourself. More experience equals more money.

This role adds the visual aspect to the live show, setting the mood corresponding with each song and giving the audience a spectacle. If a band doesn’t move at all, the visuals from an LED screen behind them can add energy. During intense moments, flashing strobes and other lights or even pyros will make your heart race and the parts that should need to feel moody will have more mellow lighting. It’s all planned according to the band’s setlist, and the lighting tech has to be familiar with the songs to not only program everything ahead of time, but make sure nothing is going wrong.

How to get the job: Just like running sound, experience and schooling will be major factors. Learn everything you can about lighting whether it’s volunteering at a local venue or getting a degree in it. There are plenty of schools out there with great programs for this kind of thing.

The list of jobs goes on the bigger the artist gets. Tours can have drivers for BandWagons and tour buses or have their own production staff dealing with guest list, ticketing and publicity. No matter how big or small, every human traveling together is important and adds to make one hell of a spectacle. Treat everyone as an asset to your life, open lines of communication and resolve differences with compassion as well as logic to ensure this silly thing called music can last a long time and make everyone a lot of money.

What other roles do you want to know more about? Let us know in the comments!

All gifs from APTV

Listen to a snippet of an unreleased Juice WRLD single

Which ‘Harry Potter’ villain are you truly the most like?

Here’s how you can get free food from Taco Bell this...

August Burns Red focus on the positive of helping others with...