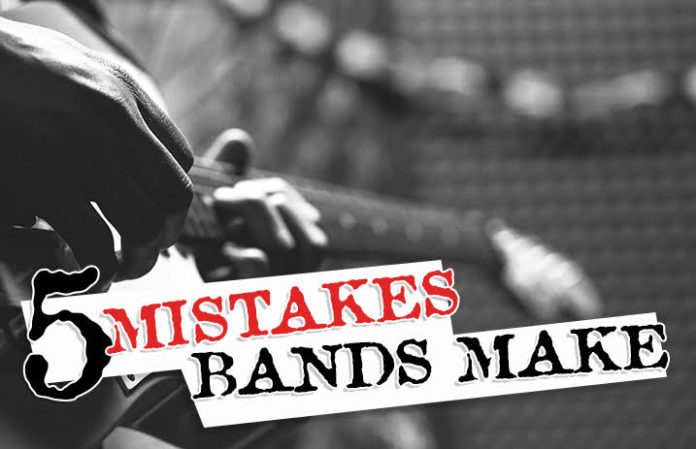 Everyone makes mistakes. It's part of learning the ropes of any profession, and a band is no different. We turned to Shan Dan Horan, the president of Artery Recordings, to offer some advice on avoiding rookie mistakes. Here’s what he had to say:

Read more: Is your band REALLY ready to be on a record label?

Are you focused on the short-term instead of the long-term?

The music industry is like a giant game of chess. For every move you make, there is a countermove you have to account for and adapt to. That is why you have to plan five steps ahead. When I ask musicians, “What is your five-year plan?” they don’t have one. It’s not that they haven't thought about it, it’s that they just haven't taken the time to sit down map it out. Plan what comes after your next show, next tour, next album. When do you realistically want to try to tour overseas? When should you start writing demos? When should you book studio time? These are all long-term goals. You should set realistic goals and timeframes. If no one is plotting the course, you will eventually run aground.

Do you have product?

I talked to a local band that just opened the biggest concert of their careers. “That was amazing, that is the most people we’ve ever played for.” My eyes glanced around as I noticed they didn’t have a merch booth. After the effort of hustling to sell 100 presale tickets (for the opportunity), they didn’t bother to get merch printed. This was a massive mistake. Not only does merchandise fund your future endeavors, it also leaves fans with something to remember you by. Like walking billboards, they wear your brand to their schools, work, the mall, etc. Unfortunately, that band missed that opportunity.

Video is by far one of the biggest tools a band has at their disposal. When I release a new single, it most certainly comes with a new video. Press sites are always interested in premiering a new music video; a SoundCloud link, not so much (unless the band is massive). While I highly suggest getting a music video that makes the band look good, it has become extremely inexpensive to self-produce video content with the right software (After Effects/Premiere) and knowledge. If you have the time and energy to learn, it’s as easy as watching YouTube tutorials. If not, try reaching out to your editor friends or companies such as Shadow Born Group. Lyric videos, track videos, behind the scenes videos, playthroughs—keep that content coming.

Are you taking things personally?

Some people just won’t like your music. That’s a fact. In our modern society, we now communicate by chiming in “this band sucks” or “the singer’s vocals suck” in a YouTube comment or Facebook thread. It may never be clear if the commenter has a point or was just lashing out because he can’t sing or play guitar (even though he wishes he could). Either way, when an artist starts fighting an online troll, nine out of 10 times it makes the artist look bad.

Are you burning bridges?

The music industry seems like a giant entity, but it truly isn't. Odds are the promoter you just burned is best friends with a label owner who is married to a big manager you were counting on to work your release. In such a small world, it’s best practice to leave all relationships on a good note. If you have problems with an individual (and you might be right for doing so in some cases), just break it off. Creating drama only makes it harder for you to get opportunities. Being known as being “super-hard to work with” isn’t the best way for you to get your foot in the door.