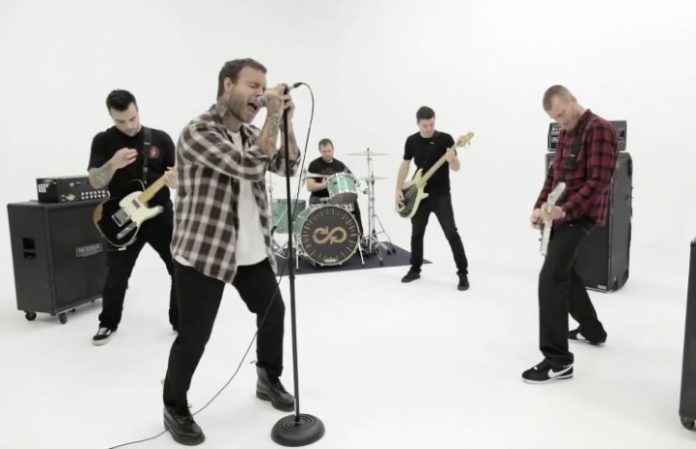 Fit For A King – Deathgrip

Fit For A King kick off their new record with the lyrics, “Laying waste to the innocent with no regret/I’m sick of it.” Much of the song this lyric comes from (“Pissed Off”)—and the album in general—is bleak and angry, but that’s not to say it doesn’t have its positives. “Pissed Off” was written because of the 2015 terrorist attacks on Paris, which included attacks on the Bataclan music venue during an Eagles Of Death Metal concert. Fit For A King were not only in Europe as these events unfolded, but bravely played a show in Paris just a few days after the attacks, sparking the writing of the song and ultimately the entirety of Deathgrip. The crucial moment in “Pissed Off” comes when vocalist Ryan Kirby screams, “Guns firing into masses/buildings burning society collapses/We can’t just sit back and accept this/We must stand/end this terror.” FFAK stood their ground alongside their dedicated fans in France and let their music make a statement.

If you haven’t heard of REPS yet, you’ll be kicking yourself in about five minutes for never having given them a listen. They deliver an insane and blistering brand of hardcore punk that will make you an instant fan. But not only are they a great band sonically, they’ve got a point to make lyrically. Their latest record, Poisoned Youth, addresses social and political corruption, which is evident just by looking at the cover art. REPS talk about everything from how we alienate each other as individuals to how politicians are “villains in a two-piece suit” (“Patsy”). Perhaps the most moving track on the record is “Courage Has No Color”: “We need to save the future for our sons and daughters/before they follow suit like sheep to a slaughter/We can’t erase what’s been said and done/but if we stand together we can finally rise above/and watch those racist cowards fucking burn.”

Stick To Your Guns – Better Ash Than Dust

Stick To Your Guns have always been a band that created records geared toward social commentary. The hardcore outfit’s latest EP, Better Ash Than Dust, directly confronts the artist’s role as not just being a creator but as being engaged in the current events of our society and attempting to make change where change is necessary. Better Ash Than Dust deals with issues that currently plague our country and our world, such as racism and police brutality. In a recent Facebook post, the band wrote, “This band is about confronting the problems within yourself, your community and your surroundings. It is about listening and learning from others to find progress.”

Hesitation Wounds – Awake For Everything

A lot of bands have started writing social and political records lately, without even initially meaning to. Hesitation Wounds is one such band. Composed of members from Touché Amoré, Trap Them, the Hope Conspiracy and Slipknot, Hesitation Wounds is a hardcore project that vents about everything from improper media coverage to the current farce of a presidential election. One of their songs, “Hands Up,” talks about the United States’ unbelievable issues with gun control and rampant violence and our continual unwillingness to do anything about it. “Enough is enough/another dead body/and we throw our hands up.”

Cane Hill’s new record, Smile, makes a social statement in a different way than the other bands on this list. Cane Hill infamously strike out against religion and the negative impact it can have on a person, but this record seems to have more to do with societal and sexual repression. “Cream Pie” is the record’s loudest statement, starting off with and repeating the line, “It’s only dirty if you make it.” This song goes out of its way to showcase intense sex sounds (maybe even some BDSM?) in an effort to make the listener as uncomfortable as possible. Why? To make the point that even though sex is everywhere in our society, it’s still, for many, inherently uncomfortable and pleasure remains somewhat taboo. Consider Smile a social experiment.