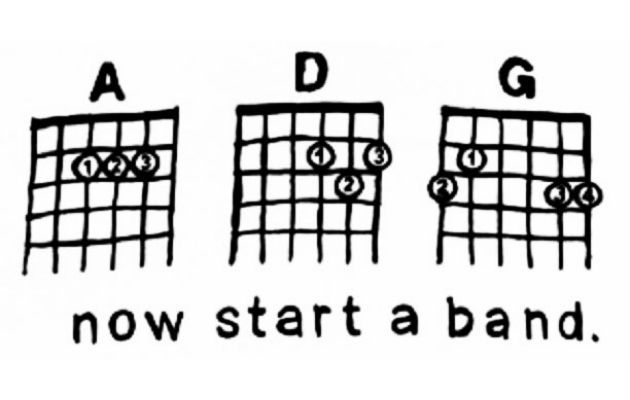 Today’s music sucks. It’s a sentiment being shared by both grizzled middle-aged parents who sold their Sub Pop singles club releases to pay for their ungrateful kids’ college education and by irresponsibly jaded folks in their early 20s who demand the planet’s clocks and calendars should stop somewhere around 2005-2006, “when things were better.” Here’s the truth: Both parties are right. There are too many bands, most of whom aren’t worth the time or the traffic they cause traipsing across the nation’s highways. Yet there’s still great music being made by people who have the kind of creative vision that can make you forget about your life for a short while or engineer the soundtrack to whatever personal greatness you wish to achieve. Should you start a band? Hell, no. Hang on: You do have that one single that was pretty cool, and it sounds better live than the recorded versions….

So yes, music sucks. Wait: No, it doesn’t! There’s no way we can take a side, and this list is here to confuse all of you potential rock gods and goddesses even more. We’re not damning the stasis of creativity or dismissing the work of truly great artists. You can’t frame the big picture because, well, it keeps growing every day and the walls of your home are too small to hang it on. So after some calls and emails to some people in bands (as well as checking in with Satan to check on our advocacy status), here are reasons why you shouldn’t start a band, and some perfectly logical tenets why you should.

DON’T DO IT: IT’S A MONEY PIT.
You know what costs money? Gear. Guitars, basses, drums, amps, microphones, pedals. Did we mention picks, strings, cleaning accessories, connecting cables, drum sticks and hardware? Maybe you’re looking a bit more futuristic and you need to rock keyboards, synthesizers, a laptop and sampling software. You can certainly get cheap stuff, but it your guitar sounds like it was strung up with your little sister’s orthodontic elastics, what’s the point? Isn’t there something frivolous you need to pay for, like rent, groceries, utilities and Starbucks? You want to tour? Do you have two unused credit cards to cover gas for the van (approximately $100-150 according to some rockers we talked with), some nights at a Days Inn, a small vat of Combos and Red Bull during drives and various van and/or instrument repair? Or would you rather spend that money on iTunes gift cards, sweet clothes, video games or rounds of drinks for all of your buddies while you’re going to see a band you love? The financial outlay of creating, recording and promoting music hasn’t gone down in price. Don’t kid yourselves: If a social media account doesn’t get followed, does it herald anything?

GO AHEAD, DUDE. YOU CAN’T PUT A PRICE TAG ON FUN.
You are playing music with (hopefully) like-minded friends/associates who are willing to disrupt their lives to help promulgate the art you created together. These are the people you have chosen to staff the pirate ship you have created in service to your creations. You will inevitably learn more about yourself, other people and How The Real World Functions than you would eating Cap’n Crunch for dinner at 4 p.m. while posting on a message board.

WHY NOT? SEEING THE COUNTRY IS AWESOME.
The world’s largest ball of twine is located in Kansas. Your vegan bros will hate you, but the thought of eating the 72-ounce steak at the Big Texan in Amarillo, Texas, sounds great. Check out the Cadillac Ranch installation while you’re there! Fuck Las Vegas: The Grand Canyon is four hours away. Ever wonder what it’s like to stay at Wigwam Village, home of the cement teepees? Look, you’re a human being. Can you replace seeing, feeling and tasting this stuff with some computer monitor with a quadrillion-number of pixels? It’s the outside world, man. Go live it.

HELL, NO. YOUR FRIENDS WILL HATE YOU.
Those other dudes you spent time practicing your sweet-assed jams with? The ones who sweat with you in the practice space whom you then maybe grab a bite or a brew with after practice? The bass player with the control-freak girlfriend who keeps calling because he hasn’t checked in every two hours? The drummer with the lower GI problem who has an acceptable idea of how the van should smell? The guitarist who wants to stop at all the “cool places” that are of interest to absolutely no one in the world but him? Hey, you wanted to start a band. If you wanted to play Dad to a bunch of dudes whose outside lives will inevitably seep into your trip in ways no one would want them to, why not just get it over with, jam your playing hand into a rotary fan and go home? One veteran Cleveland rocker just told me, “I can lose money and be a father figure to my children at home. I don’t need to do that touring.” >>>