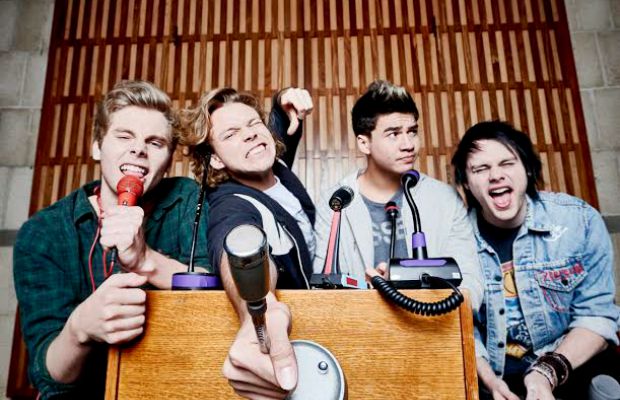 Call them what you want: Pop-punk, boy band or the death of both (idyllically they blur the lines between the two titles in a way Fall Out Boy once did and All Time Low aspire to): 5 Seconds Of Summer are unavoidably huge, and their power comes from the loyal young women that support them. That’s a characteristic, if not, the main driving factor behind boy bands’ popularity, but also one that exists in this scene’s universe: Go to Warped Tour, and the majority of attendees are female. It’s been this way for a while.

love this article @billboard wrote up on us. really gets to the core of what we're trying to achieve http://t.co/QqMJZ34VQo

5 Seconds Of Summer recognize this, embrace this and even pander to it in a way that is anything but disingenuous. They understand (it’s impossible not to) that their fans are mostly female, middle/high school age, and in the early stages of their musical development. What’s truly brilliant about this recognition is the way it affects their behavior and songwriting: Women aren’t placed in songs or written into them. Women inspire and create—they’re powerful outside of the tune penned by these dudes. It’s why their latest single, “She’s Kinda Hot,” isn’t about objectification at all—but some greater exploration of youthful reckless abandon, feeling lost and found simultaneously. The first mention of character just happens to be female.

In an interview with Rolling Stone last summer, drummer Ashton Irwin spoke about the kind of genre-specific confusion the band promote by declaring, “It’s fun when you’re confusing people. I’ll look online and see some 30-year-old dude saying, ‘They’re not rock! Bullet for My Valentine for life!’ But his daughter probably likes our band. And she’ll start her own band.”

That’s the key. She’ll start her own band. In the past, a pop-punk band in a similar position would use the “But girls like us!” defense and end the argument there. only a decade or even more recently, the sort of pop-punk bands in a similar position (notably, less mainstream but still powerful) would make the “But girls like us!” defense and end the quotation there. Irwin is instead taking this as an opportunity to respond to criticism kindly, without overwhelming self-justification. And, more importantly, he adds that his band’s power comes from influence, inspiring girls to pick up instruments…not just inspiring girls to get into other bands similar and more obscure than 5SOS, or asking them to continue to defend the band’s honor. According to him, they should be the ones to get on stage next. In that regard, it’s pretty riot grrrl of them. It’s not a sexualized power, but one that comes from knowing their audience can do what they do, and may do it better than them in the not-too-distant future.

Like most boys of a certain age, the music 5 Seconds Of Summer pen and the image they project is predicated on girl obsession: flings, dreams, crushes and whatnot. It’s been this way since the very beginning, but as the guys age and mature, so does this subject matter, or, at the very least, the way it’s treated. When emo or pop-punk bands deal with relationships, too often blame is placed solely on the female protagonist, the one that will slit your throat and make you apologize for bleeding on her shirt. For 5SOS, the lyrics are bit more introspective and less undefined in self-deprecation.

The band’s first EP, Unplugged, boasted a couple covers, Blink-182’s “I Miss You” and All Time Low’s “Jasey Rae.” One of the first original tunes they recorded, “Gotta Get Out” deals with being unhappy in a given environment—because what’s more pop-punk than wanting to get out of this fucking town—but also questions how this despondency of place effects a romantic relationship, with frontman Luke Hemmings singing “And if we fall/It’s not your fault,” before launching into an apocalyptic chorus wherein both parties need to leave. Even then, Hemmings shows an awareness of female autonomy: He’ll write you into the song, but that doesn’t mean he can control your actions or misplace blame on you. This differs from the ATL cover, which Alex Gaskarth demands action from the woman. “I want you to mean it, Jasey,” the songs says, indicating that  whatever it was she was going to say was disingenuous, or even that the speaker was  trying to control her will.

Two years later and there’s the Don’t Stop EP, their last before the release of their debut album. In this one, we find “Wrapped Around Your Finger,” a fan favorite that remains in regular rotation live. In the third verse, guitarist Michael Clifford sings, “Making all our plans in the Santa Cruz sand that night/Thought I had you in the palm of my hand that night/Screaming at the top of my lungs tip my chest felt tight/I told myself that I’m never gonna be alright.” It’s another side of the band: When they thought they “had” a girl, they didn’t. It’s a question of language and narrative; they’re clearly illustrating that a lover has left, but they’re also pointing out that she left and it hurts, but she left on her own volition. The chorus continues, “You had me wrapped around your finger/I’m wrapped around your finger,” showing that, if anything, she had full reign over the relationship, and it’s over because she decided so.

This brings us to the band’s debut album, 5 Seconds Of Summer, the first truly cohesive endeavor in the boys’ career. There are moments that complicate this theory of “women as power figures”: “Don’t Stop,” asks a girl to continue doing what’s she’s doing, i.e., being herself—but to the delight of a male suitor and “She Looks So Perfect” compliments a woman for her appearance, but namely, in wearing his underwear so there’s already been some sort of intimate, implied consensual transaction. “End Up Here” does something similar “My head spins/I’m pressed against the wall/Just watching your every move/You’re way too cool/And you’re coming this way/Coming this way.” All these songs about girls don’t come from a “woe is me/she’s so unobtainable” realm but a celebration of woman’s greatness, a celebration of what makes these individual women so strong in their own agency, a celebration of what makes each and every young lady unique.

That isn’t to say the guys should be championed as defenders of feminism or assigned any specific sociopolitical position. What they are is good dudes, and good dudes sometimes say bullshit. In a more recent conversation with Rhythm Magazine, Irwin said, “Chicks don’t judge your drumming, let’s be honest. Fourteen-year-old chicks aren’t going to be like ‘Man, this guy sucks.’ They just like to see a drummer.” The interviewer responded by saying, “That’s a great thing you just said, that chicks don’t judge your drumming. There’s a song in that. I would say you’ve probably influenced a lot of girls to be drummers.” Irwin continued, “I hope we get some people playing guitars and drums again. I think that’s a great thing our band could do for people.”

It became something of a hot topic on 5SOSFam internet, girls attempting to dissect what the drummer meant. Some thought it was indirect commentary on their young, female fanbase’s obsession with their personal life over music. Others were offended, tweeting at the musician that though they might not be able to label the anatomy of a drum kit, they still appreciate his musicianship. Whatever the reasoning, the use of “chicks” here is concerning as is the statement. Why don’t they judge your drumming? Is “judge” here used more like “criticizing”? Because a girl isn’t going to scream “You suck” at a 5 Seconds Of Summer gig, she doesn’t know about the mechanics of drumming? It might be misguided language in the way their recent single, “Good Girls,” was, with a chorus of “Good girls are bad girls that haven’t been caught” meant to symbolize independence and an exploration in identity that, to the unknowing person (aka someone who doesn’t worship at the altar of this band) kind of reads like sexual objectification.

Until someone asks Irwin, we won’t know for sure. What we have are the songs, ones that call for female autonomy because it doesn’t demand action from women in the way other pop-punk bands do, or even in the way fellow Aussie pranksters the Janoskians have made a career of (it’s pretty safe to call it casual misogyny). While these mostly teenage boys from Down Under aren’t perfect, they’re doing more for ladies who listen to music made by white dudes than most other dudes who fall in that category—and that’s pretty exciting.