Michael Clifford on “the best guitar that [he’s] ever played”

Clifford wanted to both pay homage to Joan Jett’s guitar and inspire the next generation with its lightweight design.

5 Seconds Of Summer and guitarist Michael Clifford have already had quite a busy year. The band dropped their latest single “Easier” last week, which came not long after Clifford unveiled his signature Gibson guitar and the news the band were in the studio.

Now, Gibson and AP are teaming up to offer more insight into Clifford’s new guitar, which was first revealed during the Gibson Experience at NAMM 2019 in January. In this exclusive interview, Clifford reveals how Joan Jett inspired his new guitar, how 5SOS aren’t pigeonholed into one sound and more.

While touring the world with the Runaways, Jett noticed her blond Les Paul was digging into her shoulder, according to an interview with Guitar World in 2017. While in search of a lighter rig, she ended up buying her first Melody Maker from the Raspberries’ Eric Carmen in 1977. She went on to play it on a plethora of hits including “I Love Rock ’N Roll,” “Crimson And Clover,” “Do You Wanna Touch Me (Oh Yeah)” and “Bad Reputation.”

Jett later created her own limited signature Melody Maker in 2009. She described the experience as creating a “simple guitar” because she’s a player who doesn’t “need a lot of bells and whistles.”

Clifford later spotted Jett’s signature at the Gibson offices when he was 17 and was instantly enamored by it.

“When I was about 17, I went into the Gibson offices, and I found the Joan Jett Melody Maker. I don’t know what happened, but I looked at it, and I was like, ‘Holy crap, this is the best guitar I’ve ever seen.’ I was like, ‘You guys should consider making a new version of that guitar with someone else, wink wink.’”

The guitarist ended up rocking both the original and the Blackheart model onstage after that. As a result, Clifford wanted to both pay homage to Jett’s guitar while also hoping to inspire the next generation with its lightweight design. 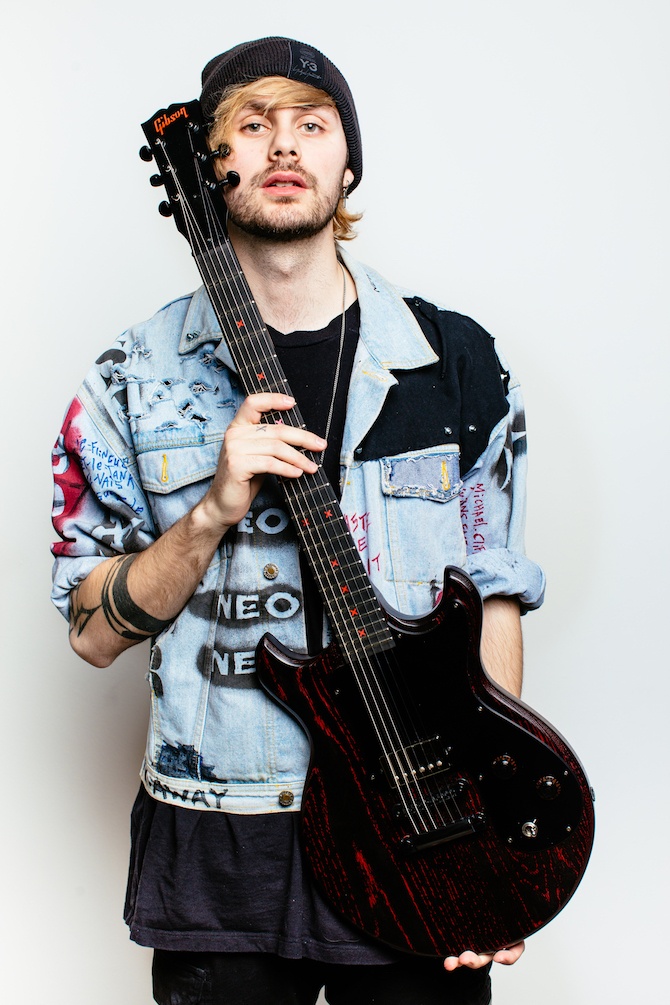 “I wanted it to be an homage to the Joan Jett Melody Maker that she made because it was the best guitar that I have ever played,” he says. “I hope that this is the type of guitar that is someone’s first guitar. This actual guitar is really inspiring for me—how it’s so light and the look of it and the feel that it has when you hold it inspires you to do something that’s against the grain if that makes any sense. I’d like for people, when they play this guitar, to not feel like they’re constricted by what makes a guitar standard.”

Read more: “It gets bad before it gets better:” 5SOS’s Michael Clifford on mental health

Clifford goes through the specifics of the guitar, which include a double cutaway Melody Maker body style in jet-black cherry with a slim taper maple neck. There’s also red X fret markers and black chrome hardware throughout. From there, the guitarist explains how his tone has differed throughout 5 Seconds Of Summer’s career.

“My tone bounces all around the place, and I think what’s interesting about us specifically and my playing style, in general, is that I don’t think I’m pigeonholed into a tone or a sound,” he shares.

thank you so much Birmingham. two nights in Cardiff, coming up next. ?: @hoeg

Going off his stature in the music world, Clifford hopes he can inspire someone just as Jett did for him.

“[I want to] just inspire any kid to actually look at the kind of stuff that I play and the type of guitar that I play and be like, ‘Wow, that’s awesome, and I want to do that,’” he says. “In doing that, that can lead you so many other places in your life and through music, and playing a guitar should be an exciting thing. Every day that you pick this thing up, you can learn something new and create something that can stand the tests of time.

Read more: 5 Seconds Of Summer are already working on their next album, Michael Clifford says

“I think the thing about guitar and music in general that should excite people is it’s a lifetime thing—learning to play and learning to hone your craft when it comes to playing the guitar,” he says.

Check out Michael Clifford talking about his Melody Maker signature Gibson below, and you can check out all of Gibson’s products here.

5 Seconds Of Summer have a handful of gigs this summer, including a charity show with All Time Low, before heading out with the Chainsmokers this fall. Check out the full list of dates below and grab tickets here.

*5 Seconds Of Summer only