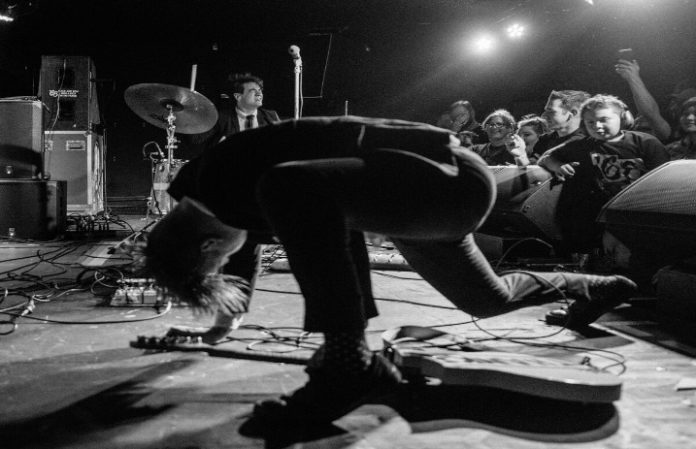 ’68, the duo of vocalist/guitarist/pedal abuser Josh Scogin and drummer Nikko Yamada, have returned to raise some fuss and some holler. On Friday, ‘68’s second album, Two Parts Viper, is being reissued as a deluxe digital edition, with four new songs accompanying the original 2017 release. Today AP is premiering the duo’s cover of “Summertime Blues,” the classic 1958 song written and performed by Eddie Cochran, that was later turned into an distortion-overload hit by proto-metal trio Blue Cheer 10 years later.

“I have wanted to record a cover song for quite some time,” says Scogin on the choice to do a song older than he is. “We do a ton of homages live, everything from At The Drive In, Paramore, Janis Joplin, Led Zeppelin and Notorious B.I.G. to name a few. It varies from night to night, but these are always just small bits—maybe just a riff in the middle, or a signature lyric. I really wanted to record a song, in its entirety, that was not written by me. So I did. I had several in mind, and someday I might get to those, but the song ‘Summertime Blues’ just seemed to make the most sense, especially Blue Cheer’s version. Don’t get me wrong. I love Eddie Cochran’s version, too (in fact you should go listen to it right now, it is so good), but with the rawness that Blue Cheer conjured up—in all their songs—it is easy for me to gravitate to it. All in all, this is just another chance for me to pay homage to another great band and another great song.”

In addition to “Summertime Blues,” the other three tracks added to the deluxe version include two songs from the original album sessions, “That’s The Plan Anyway, Now Figure Out How To Follow Through” and “One Thing, However I Have Found To Be True,” along with a “director’s cut” of “Summertime Blues.” The two versions of “Summertime Blues” are the first recorded tracks featuring drummer Yamada, who replaced Michael McClellan last October.

Head over to iTunes and Spotify tomorrow (April 27) to stream and purchase this sonically fortified Viper. And head out on the highway to see ’68 live on tour from now until August at various festivals as well as opening for Stone Sour, Trivium, Norma Jean, Comrades and Emery at various junctures. Because one should never do without the purification power of rock ’n’ roll…