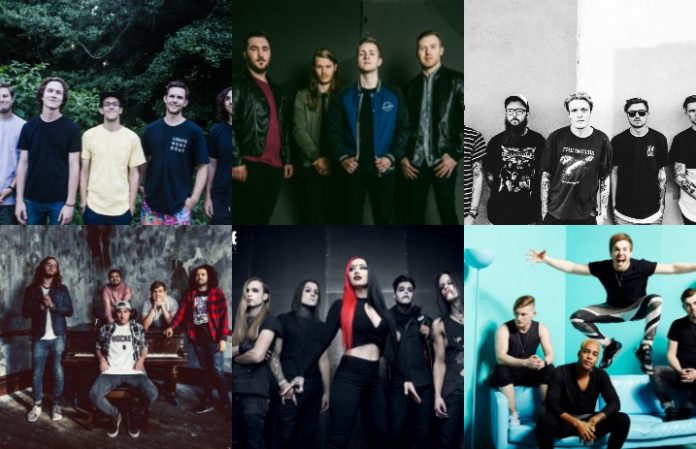 Most bands don’t just pop up out of nowhere and immediately play to thousands of cheering fans in crowded arenas; they usually have much humbler beginnings. We talked to the six nominees for Breakthrough Band about their biggest moments over the past year. So sit back, relax and find out how one of these bands went from sharing a $5 pizza on a curb to playing in front of a sold-out crowd.

There are only a few days left to vote, so don't forget to show your support and vote to help your favorite artists win a Skully!

“I'd say one of our biggest and proudest moments last year was playing the Sonic Boom Fest in Madison, Wisconsin. The turnout was insane and the lineup was ridiculous top to bottom. Being that was one of the first times we hit the stage to thousands and thousands of kids, it's just one of those moments that sticks with you. We had a lot of ‘wow’ type moments last year, but that one really stood out. I remember we actually had technical stuff going wrong pretty much right up until we hit the stage, but it all seemed to resolve like a minute before we ran out. So all of us went from maximum stress to just pure relief in a matter of moments. It probably took a few years off my life but I think that kind of stuff can make for the best memories when it works out. The crowd had great energy all day long. The rock scene in Madison is one of the best around and the station who runs the festival, WJJO, has something special going on out there. We were just stoked to be a part of it. It's definitely one we'll remember for a long time.” -Brian Burkheiser, vocals

“Our proudest moment this year was headlining a tour in the U.K./Europe for the first time and having all the U.K. dates sell out. It's truly insane to us that we can go to another continent to play shows and the people there genuinely care about our band. For that, we are more than grateful.”—Kevin Maida, guitar

“Obviously having ‘Life’s Not Out to Get You’ chart in the top 10 in the U.K. and the U.S. last year was pretty damn amazing, but pulling off a four-month world tour is this band’s biggest achievement to date. We played 71 shows in 15 countries, traveled 53,000 miles, and sold over 52,000 tickets, all between January and April. During that tour we played some of the biggest headline dates Neck Deep has ever played, including Manchester Academy 1 and London Forum, which are legendary venues we’ve been going to see bands play in since we were kids. It was a true milestone and has made us all very excited for what comes next.”—Neck Deep

“It's really hard to pick a biggest moment because it was such a monumental year for us. Everything from being on the cover of AP for the first time, to playing Warped Tour main stage, to headlining Slam Dunk Festival, to playing Download Festival to the largest crowd we have ever stepped out in front of. Being nominated at our first Golden Gods in the same category as Iron Maiden, Slayer and Anthrax. Making it onto rock radio. Releasing our best selling album to date. Doing our first headlining tour and selling it out. And Hot Topic releasing my clothing line and it selling out in 24 hours. But for us, personally, it was the honor of being the only opening act for Marilyn Manson’s tour. Stepping on stage in front of a full proper arena full of people is a surreal, ‘Holy shit we have arrived’ moment! It truly was a milestone of a year for us!”—Ash Costello, vocals

“When we started in 2008 we had no one. No one to help us. No one who wanted to tour with us. We were just some “local band” to everyone. So we booked our own tours, played shows to literally no one and when we would “headline” in the middle of nowhere, we would drive to the nearest mall to promote ourselves to strangers with a binder and an iPod telling them to come see us at their local coffee shop. I remember one day on tour, when we first started, we didn’t have enough money to eat, so we split a $5 Hot-N-Ready pizza amongst all of us and ate it on a curb. My point is that we literally started from the bottom. We knew this would be a struggle, and we embraced every step of adversity. I’m proud to say that this year in NYC we sold out a show to over 1,000 people. It really was an incredible sense of accomplishment, you all have helped us get here and we’re so happy to say that this is just the beginning.”—Cody Carson, vocals

“I think our most proud moment of 2016 so far would be our 99 percent sold out North American tour. The crowds night in and night out were absolutely unreal. We were performing in some venues that we never thought we'd play, let alone sell out. It was a dream. The entire thing blew us away, and it's all thanks to the fans.”—State Champs