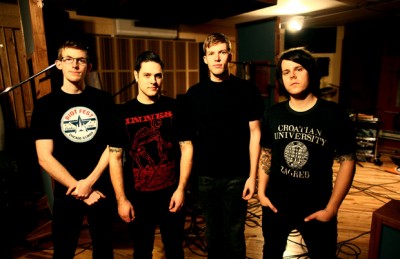 While currently wrapping up a tour with You Me At Six, The Swellers frontman Nick Diener stopped in to say hello and discuss some show etiquette with AP readers. Check it out below and be sure to see them on their last few dates next week here in the US before they head over to Europe in April.

We've spent a couple of weeks so far on our co-headlining tour across the country with You Me At Six, and it's been a blast. We knew going into it that the musical/stylistic differences between all the bands were going to make this a pretty unique show, and that lots of different types of music fans would be showing up, which is great! [There’s] lots of new music for everyone to sample. Seems to be working well.

Now, the Swellers are a punk rock band. Plain and simple. We get in the van nine months out of the year to play and sweat our asses off, no matter what. We've been doing this for years and are a pretty unstoppable machine when it comes to getting onstage and then getting to the next show. It is apparent on this tour, however, that many of these kids in the crowd are very new to what we do, which has proven to be dangerous at times. I wanted to take a second to recap some basic safety guidelines that new show-goers should take into consideration when coming to a show. I might even throw in some etiquette/pet peeves in there as well. A lot of this will be common sense to a lot of you, but it's awesome to be able to welcome new people into this thing we're all a part of called Punk Rock.

1. You really, really don't need to wait outside in line for hours—especially if you already have a ticket.
We understand that you're showing dedication and want to get in that front row, which we all really do appreciate, but these shows are general admission. That means there are no seats, and anyone can shove their way to the front of the crowd to get a good spot. (Try crowd surfing, slamming in the pit, or even asking someone politely if you can make your way up close.) We've seen fans wait in sub-zero temperatures with barely any shelter or protection from the elements, and even in blistering heat. Sometimes they don't even drink water or eat throughout the day, making them more vulnerable to passing out at the show and missing their favorite band after all. It's unnecessary. If you're going to wait in line, that's cool, but please be safe and stay hydrated and healthy. Plus, sometimes first row isn't so fun. Did you think about how it feels being smashed against barricades/stages and getting kneed in the face by a stage diver? Also—the sound is better in the back!

2. If someone jumps off the stage, CATCH THEM.
You might not be strong enough to pick someone up over your head by yourself, but there are tons of people (hopefully) standing next to you, and with their help, you will be able to safely catch and move the stage diver. Someone landing headfirst into the concrete floor is no fun for anyone, and the show will probably be stopped, even canceled. Venue closed forever. Band sued. It's like a metaphor for life: strength in numbers. Also, if someone falls down, pick them up. Don't be an asshole. We're all in this together, and it's unlikely that these people are trying to hurt you. But it can and will happen. Such is life. Everyone enjoys this music their own way, so we all need to make room for each other.

3. Stage divers: We love you guys, but most of the crowd who doesn't know what's up is going to hate you.
Do your best not to annihilate faces. When you run and jump off the front of the stage, don't launch yourself off the monitor (that speaker wedge in the front). It will flip over and you will biff hard. Also, if you're getting onto the stage from the crowd, please try to avoid the pedalboards and mic stands! The mic stands are not bolted into the stage, and I have a couple of chipped teeth to prove that. Move off to the side, don't break our shit, and we're happy.

4. Stop texting during our set, douche.
Or at least stand in the back against the bar or the wall so I don't see your bored-ass face glowing from your iPhone screen. And while you're at it: Ever thought of not taking pictures and enjoying the show with your own eyes? Might be more fun. If you have a phone, you're a photographer—we get it.

5. If you get to meet the band after the show, that rules, but treat them like you would a friend (if you can maintain your composure).
They'll probably remember you (in a good way) a lot better than if you ask them to touch you, lick their sweat or sign your vagina or whatever. (Okay, I'd probably remember signing a vagina.) But man, bands on tour are tired. We're sweaty. Our voices and backs are always sore. We're down to hang with cool people, but we're ready to bolt the second things get weird. Also, stop stalking us from around the corner. If you want your picture taken or you want an autograph, step up and say so! We're glad to do that sort of thing. We'll respect you for your courage. We know we're intimidating. Just don't be mental.

6. Pre-sale tickets are a pretty foreign thing to a lot of our fans.
We come from a place and time where you pay five bucks at the door, get an X on your hand or a wristband, and you're inside the venue. No tickets exchanged. Thing is, on this tour, pre-sale tickets went fast, and a lot of shows actually sold out, which is awesome! It unfortunately left a lot of our fans unable to get into the shows to see us play. Ya snooze, ya lose. But yeah, next time, pick up some pre-sale tickets. It ensures that you'll get into the show, and it makes the band/promoter/venue/booking agent all very happy to know that people are actually going to be at the show! Helps us all more than you know.

With that all being said, it's been a rad tour. We Are The Ocean, Twin Atlantic, and You Me At Six are all incredible bands that you should get into if you haven't already. Crazy to think that shows on our first co-headliner are selling out and that so many people are singing along. You're all the reason we get to stay on tour and do what we love. Thanks, and see you in the pit!
–Nick and The Swell Guys