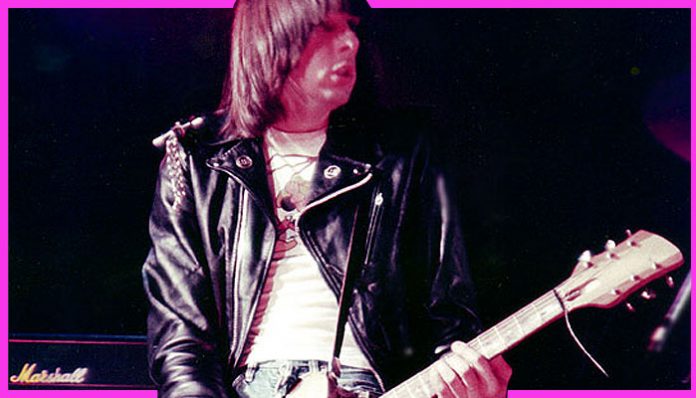 Part of the initial hype around punk rock was it had “no guitar heroes.” That was an exaggeration. To clarify, punk (in part) was meant to destroy the cult of technique. The obsession with 15-minute guitar solos, cramming in every note and lick you know at lightning speed. After all, what’s the point of playing music? Showing off all of your flashy chops? Or playing exactly what’s right for the song and nothing more? These 17 punk guitarists from the ’70s truly forged the cutting edge.

Truth be told, punk had some great guitar players. Some were deceptively amazing, smuggling serious musical knowledge into what was supposed to be three-chord bashing. Others knew to flash their chops in just the right places. As long as the playing displayed the requisite energy, economy and noise factors, everything stayed punk-ily copacetic.

Read more: How well do you know your punk-rock history?

There were the guys and gals who used punk as a canvas to paint six-string notions across rock ’n’ roll that perhaps had never been previously imagined. Perhaps they did these things out of boredom? Maybe they reached for those heights because they didn’t know they weren’t supposed to do that? Nevertheless, they set the necks of their Fenders or Gibsons or whatever off-brand they could afford into the crooks of their left hands, adjusted their amps to proper stun-gun settings and created sounds/riffs/tonalities that were wholly individual and unique.

Punk rock didn’t produce any Jeff Becks, Eddie Van Halens or Bucketheads. But it produced a Johnny Thunders, a Steve Jones, a Johnny Ramone and a Poison Ivy. It even produced a Keith Levene or two. In other words, there have been plenty of exceptional punk guitarists to go around. Hence, it’s Alternative Press’ distinct pleasure to present 17 of the greatest ’70s punk guitarists.

CLAIM TO FAME: Thunders is essentially the blueprint for every punk-rock guitarist. Starting with the protopunk New York Dolls, then moving into punk proper with the Heartbreakers, he created the look, the sound, the licks and the attitude. Others preceded him. But Thunders wrote the rulebook.
SIGNATURE MOVE: Sweetly distorted power chords and the Chuck Berry lead technique filtered through the Yardbirds’ thermonuclear fuzz.
PROOF: “Personality Crisis,” from the first New York Dolls album

CLAIM TO FAME: Johnny Ramone defined himself by what he didn’t want to do. He didn’t want to play a Les Paul or a Strat like every other ’70s guitarist. So he bought a $50 Mosrite because it looked cool. He didn’t want a lot of wanky, blues-drenched solos. So he stripped his technique down to two barre chord positions and played up and down the neck. He reduced rock guitar to rhythm guitar. And that became punk’s rhythm guitar technique.
SIGNATURE MOVE: Downstrokes and two barre chord positions, creating any chord you needed while looking cool in a bowl cut and black leather jacket
PROOF: Ramones

CLAIM TO FAME: Iggy Pop’s initial claim to fame was actually two distinct bands, depending on who was cranking out the riffs. Original Stooges guitarist Ron Asheton was a little more loose, even psychedelic in his approach. But he figured out how to sound great, despite being essentially untutored, through sticking to his strengths and sheer sonic architecture.
SIGNATURE MOVE: A series of drones played through what sounds like 50 daisy-chained fuzzboxes, along with wah-wah abuse so excessive, it actually makes sense.
PROOF: The entirety of their debut LP, The Stooges

James Williamson – Iggy And The Stooges

CLAIM TO FAME: The Texas-born James Williamson brought a more standard rock guitar ethic to what was renamed Iggy And The Stooges upon assuming the guitar slot (and moving Asheton to bass). But his playing was still chaotic as hell. His crazed approach utilized overdriven power chords more than fuzzy drones, spastic leads with no wah action and a manic energy Pop once likened to an overactive thyroid.
SIGNATURE MOVE: Marshall-amped slash chords, gibbering lead work, tweaker dynamics
PROOF: “Search And Destroy,” or the entirety of Raw Power

CLAIM TO FAME: It’s hard to separate the individual parts of the MC5’s prime Detroit protopunk guitar team. They began as a standard lead (Wayne Kramer)/rhythm (Fred “Sonic” Smith) squad. Then they discovered free jazz. Soon, they varied the power chords with modal counterpoint leads that blasted into the atmosphere.
SIGNATURE MOVE: Volume, distortion, huge block chord riffs and that Yardbirds-go-avant-jazz lead style
PROOF: “Kick Out The Jams,” from the album of the same name

CLAIM TO FAME: This six-string demon from Cleveland was an amalgam of every player above, bar Johnny Ramone and Jones. Just factor in the Midwestern hard-rock power of Alice Cooper or even Blue Öyster Cult. Cheetah Chrome had chops that placed him closer to Williamson or the Kramer/Smith team. He could’ve been in the MC5.
SIGNATURE MOVE: Enormous heavy-metal barre chords with leads that managed to be both stinging and singing
PROOF: “Sonic Reducer,” from the first Dead Boys LP, Young Loud And Snotty

CLAIM TO FAME: The other great Jones of Britpunk began with a cardboard crunch guitar tone and a Thunders/Ronson-style lead technique that sings melodically more than most of his peers. He became more refined as he and the Clash moved along, and his place on this list of ’70s punk guitarists is a no-brainer.
SIGNATURE MOVE: The crushing riff that gives way to a lead that eventually breaks down into melodic sustain
PROOF: “Complete Control,” the best of their early singles

CLAIM TO FAME: The Damned’s founding member was the James Williamson of Britpunk. He unleashed a sonic barrage perched somewhere the MC5 and Keith Richards. In the studio, he plugged straight into the recording console and turned the fader up—no amp!
SIGNATURE MOVE: Battering-ram chords, convulsive lead work
PROOF: “New Rose”

CLAIM TO FAME: A teenage heavy metaller discovered by Generation X’s Billy Idol and Tony James playing Deep Purple covers at a youth center. The duo played him Raw Power and asked if he could perform like that. He could, and be even more excessive if needed, a la the extended solo on “Youth Youth Youth.” But he tended to favor sustain-drenched melodies drawn from the immediate glam past. A truly underrated ’70s punk guitarist.
SIGNATURE MOVE: Rasping chords and euphonious soloing, with the occasional blitzkrieg
PROOF: “Wild Youth”

CLAIM TO FAME: A brief stint in the pre-record-contract Clash, where he was a third wheel with a reported “sheet metal” tone. He later resurfaced in John “Johnny Rotten” Lydon’s post-Sex Pistols Public Image Ltd. Perhaps the first post-punk guitarist, Levene unleashed moves U2’s The Edge would take to the bank. Except Levene used those moves as weapons, not hooks.
SIGNATURE MOVE: A ringing harmonic barrage
PROOF: “Public Image,” then the entirety of Metal Box

CLAIM TO FAME: Buzzcocks offered another inseparable team, bringing the most perfect pop songs ever written to life via interlocking rhythm guitars that instinctively played counterpoint. As a soloist, Steve Diggle was a full-on Thunders-esque rocker, while Pete Shelley favored minimal single-note leads inspired by ’70s German art-rock bands such as Neu!
SIGNATURE MOVE: Battering-ram chord work that interlocks, with tandem lead work
PROOF: “Ever Fallen In Love (With Someone You Shouldn’t’ve?)”

CLAIM TO FAME: Thunders’ foil in the Heartbreakers. Where Thunders played from the gut, Walter Lure was more technical, inspired by flashy ’60s British blues players such as Beck and Jimmy Page. As he once corrected a fan, “I’m not a punk guitarist; I’m a rock guitarist.”
SIGNATURE MOVE: Counterpoint riffs to Thunders’ raunch, with a flashy lead burst
PROOF: “One Track Mind”

CLAIM TO FAME: Ivy made punk’s connection to rockabilly and ’60s garage rock explicit. She, more than anyone here, was influenced by ’50s power-chord father Link Wray and did it all with great style. She also had a fabulous tone, instinctively understanding that you get better, more articulate crunch from a small, underpowered tube amp played wide open than from a million-watt heavy-metal stack.
SIGNATURE MOVE: Slashing chord work with leads that feature tasty whammy bar seasoning
PROOF: “Can Your Pussy Do The Dog?”

CLAIM TO FAME: It’s often said that Australia’s Saints were the Antipodean Ramones, having developed similarly minus awareness of Da Brudders. But Ed Kuepper was more chaotic and violent-sounding than Johnny Ramone—and was capable of lead work as blistering as, say, Brian James’. Kuepper made the Saints their own entity.
SIGNATURE MOVE: Sheer sonic violence
PROOF: “(I’m) Stranded” or “Demolition Girl”