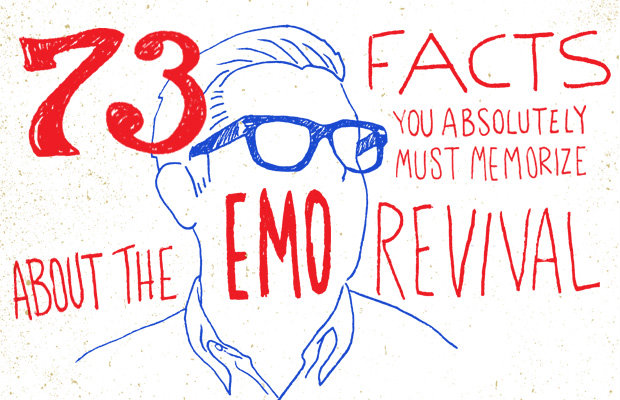 We here at AP pride ourselves on staying on top of current musical trends. Throughout the course of our 300-plus issues and nearly 29 years in business, we’ve helped spread the gospel of nascent, often misunderstood genres like goth, industrial rock, noise rock, nü metal, pop-punk, metalcore and plenty more.

But recently, we began hearing a new descriptor pop up all across the internet: “emo revival.” Being the intrepid journalists we are, we decided to dive headfirst into this subgenre to see just what we could unearth. The results may surprise or shock you, but no one ever said rock journalism was easy, and we think it’s important to educate and inform our readership so they can stay in touch with what’s hot right now. So without further ado, here are the 73 facts you absolutely must memorize about the emo revival.

1. EMO NEVER WENT ANYWHERE.
It seems like ever since the term was initially coined in the mid-’80s (largely applied to Dischord Records acts like Rites Of Spring, Embrace and to a lesser extent, Fugazi), there have been people saying emo was “dead.” First, Cap’n Jazz and Sunny Day Real Estate revived it in the early ’90s; then Braid and the Promise Ring in the mid-’90s; then the Get Up Kids (and inexplicably, Weezer) shortly after that. (Plus there was the side scene of screamo growing through that entire time period, thanks to record labels like Level Plane, Gravity and Ebullition and bands like Indian Summer, Saetia and Still Life, but that’s a whole other story.) Let’s not also forget the massive emo explosion in the early 2000s with the likes of Jimmy Eat World, At The Drive-In, Saves The Day, Dashboard Confessional, Brand New, Death Cab For Cutie, Taking Back Sunday, Bright Eyes, Thursday, Cursive and dozens more bands, which helped morph the definition of “emo” into stuff like the Starting Line, Story Of The Year, Hawthorne Heights and the Used.

But here’s the thing: Regardless of just how you define the genre, emo never went anywhere, ever. Every time the genre delivered a few breakout bands that helped temporarily popularize a style of music best described as “loud guitars, weepy vocals and lyrics that either worshiped or vilified women,” there were always hundreds more bubbling underneath, honing their craft, drawing influence from both the current crop of emo and the genre’s godfathers. It’s been this way for nearly 30 years, and it will continue on long after the current attention from “tastemaking” websites dies down.

At its best, emo is rock music at its purest: unfettered honesty tied with melody and pop sensibility. (At its worst, it’s half-forgotten mid-’00s mall-screamo like A Change Of Pace and A Thorn For Every Heart.) But just because it all doesn’t sound the same doesn’t mean you can’t appreciate it equally. Raving about how great Into It. Over It., Touché Amoré, Tigers Jaw, La Dispute, Title Fight and Pianos Become The Teeth are is fine, and we agree with you—which is why we’ve been covering these bands and dozens more of their scenemates for years now. But to pretend that these bands somehow “revived” a genre that never went away is downright silly from a fan’s perspective and ignorant from a journalist’s perspective. Those bands have just as much claim to the “emo” moniker as Paramore, Fall Out Boy and My Chemical Romance, which is to say as much or as little as they want. Emo has always been a nebulous term, which is why it will never truly die—it moves like the tide and evolves and mutates with each subsequent generation of musicians. You can’t revive something that never died.