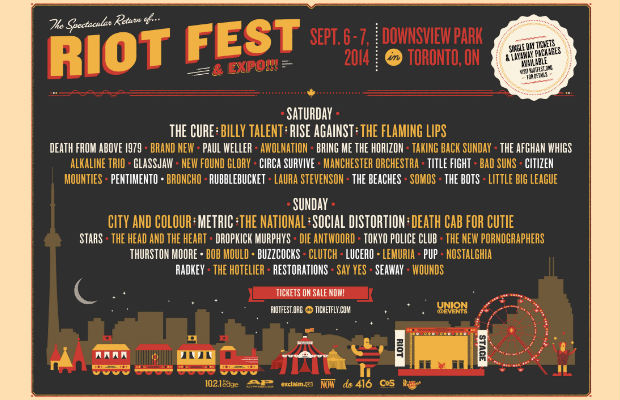 September is finally here, and you know what that means: It’s Riot Fest season! Riot Fest has quickly become the AP staff’s favorite festival of the year, with its insane lineups full of unexpected reunions and legends rubbing shoulders with up-and-comers. All three Riot Fests—Toronto, Chicago and Denver—share some lineup overlap. No matter which one you attend, you’ll have a chance to see the Cure, Taking Back Sunday, Rise Against, Bring Me The Horizon, New Found Glory, City And Colour, Social Distortion and more. But we thought it would be fun to feature some of the acts that are exclusively playing only one Riot Fest, that way you can go see ’em, then rub it into the faces of everyone attending the other Riot Fests that you got something special, maaaan. And isn’t bragging rights what it’s all about?

You can catch the following seven bands exclusively at Riot Fest Toronto at Downsview Park on Sept. 6-7, so get your tickets now!

It’s rare that a band are so dazzling live that after seeing them you have to pick up their album. Such was the case for me after I saw Billy Talent open for My Chemical Romance in 2008. I remember my best friend and I sang the melodies with nonsense words, wishing we had the albums so we could actually enjoy the songs again. I felt like I wouldn’t survive until I had a for-real earworm cure to that “fallen leaves, fallen leaves, fallen leaves” song that jostled me around in those crowds. It was intense. They opened those shows with the ominous riff that starts “This Is How It Goes,” which was such an immediate adrenaline shot. If you’re looking for a set with intense sing-alongs that will get your heart pounding and feet off the ground, catch Billy Talent. You won’t regret it. —Cassie Whitt

Can you believe it’s been a half-decade since Brand New released new music? It’s true: Daisy came out all the way back in 2009. However, there have been repeated rumblings of new music coming from Jesse Lacey & Co., and what better place to debut a brand new album recorded completely in secret than in front of 10,000 or so people? (Keep in mind that’s a metric 10,000, which is really something like 17,498 or so people—I think, I didn’t take a single math class in college.) Listen, the odds of something like this happening are infinitesimally small, I get that, but the odds of Brand New playing “Degausser” twice in the same set back at the Bamboozle 2007 were infinitesimally small, too, and look what happened there? —Scott Heisel

Not only is Toronto Riot Fest one of the last times to see Death Cab perform with original guitarist Chris Walla, but it could be your only chance to see Death Cab this year. The band have been busy recording their sixth studio album, so their touring schedule has been fairly quiet this year, minus a handful of festival dates. (Of course now that I've said this, they'll probably announce a last-minute fall headlining tour tomorrow.) Speaking of the new album, it's slated to come out early next year, so there's always the small chance they might slip a new song into their set. (A girl can dream, right?) Moral of the story: Death Cab For Cutie are always a good idea. —Brittany Moseley

After reuniting and releasing two awesome singles—“Trainwreck 1979” and “Government Trash”—people are pretty hyped for this Canadian dance-punk duo’s comeback. With their first album in 10 years, The Physical World, coming out next Tuesday, DFA79 are set to tear Riot Fest a new one. The band are actually in the rare position where picking a festival set list will be easy: People will get to hear the old favorites (because there’s only one old album and some EPs), and everyone actually wants to hear the new stuff after waiting so long. —Matt Crane

Native Canadians? Check. Celebrating the release of a fantastic new album, their first release in four years? Check. Still rocking hard after a decade-and-a-half in the indie scene? Check. One of the most celebrated and eclectic indie rock acts to emerge from the Great White North in the '00s, The New Pornographers have proven themselves a musical force to be reckoned with, unafraid to let their pop tendencies and off-kilter writing style run wild. The group have become a festival fixture in recent years, and with good reason: Their live show simply slays. —Philip Obenschain

Buffalo, New York, is pretty much in Canada, so considering the measly 99-mile commute to Riot Fest Toronto, Pentimento will be ready to crush it. They've already stepped up to the festival crowd once this summer with Weezer and Brand New—Riot Fest will be just like riding a bike. Brush up on Pentimento's self-titled LP and Inside The Sea EP; watching their reflective emo rock is better when you know the words. —Brian Kraus

The question you should asking yourself isn’t why you should see Seaway, but rather, why shouldn’t you? The recent Pure Noise Records signees and Canada natives will not only be on their home turf at Riot Fest Toronto, but the atmosphere they create while onstage is unparalleled. The group manage to emit the energy of a hardcore band while formulating some of the catchiest hooks and melodies pop-punk has to offer. In other words, there is absolutely no reason for you to miss out on Seaway’s set at Riot Fest Toronto this year. —Tyler Sharp