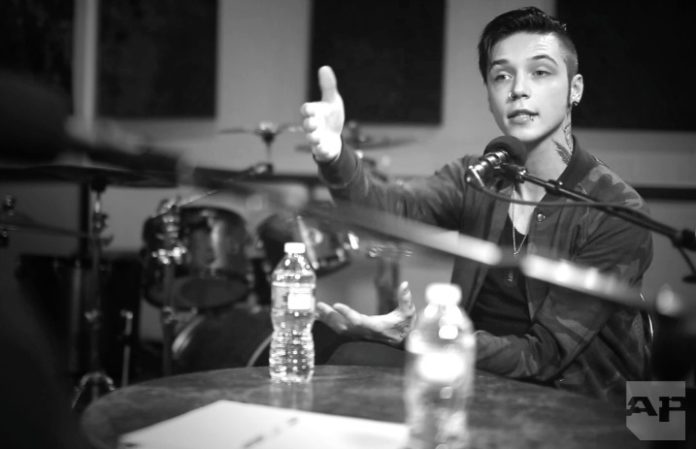 The podcast has been around for over a decade, and for most of that decade, they were primarily the domain of hobbyists, amateurs and public radio junkies. But thanks to recent shows like the runaway hit Serial and signature events like President Obama’s appearance on Marc Maron’s WTF, podcasts are having a moment.

Matt Pryor of the Get Up Kids picked up on the medium’s potential early on. “Listening to the ones comedians like Marc Maron do, it was like, ‘wait a minute… he’s just speaking to his friends. I can do that!’” For musicians like Pryor with home recording setups, the gear is already at their disposal, so there’s no cost to entry. He’s even recorded episodes of his podcast, Nothing To Write Home About, while on the road in a tour van.

That ease was part of the appeal for Nick Vombrack of Dr. Manhattan, host of The Record. “For a long time I’ve wanted to do a documentary showing musicians on the road,” he says. “It’s not as glamorous as you think it is, sleeping in a van in a Wal-Mart parking lot!” Where a video documentary would have required expensive gear and tons of time, Vombrack can podcast from the comfort of home, on recording and editing gear that’s already his stock in trade.

The simpler nature of a podcast production can be an advantage in other ways, too. Jonah Bayer of Going Off Track notes, “If we had the cameras on and all this extra other shit, it might take away from getting those really honest conversations.” And as journalist Steven Hyden, host of Celebration Rock, notes, podcasts have a something a leg up on print media as well. “You don’t have control over what voice people read your stuff in,” he points out. “When people hear your voice, there’s a natural warmth and friendliness to it.”

The uptick in interest in podcasts across the board has led to a spike in podcasts in the alternative music world. When producer Jesse Cannon launched his band-producer matching service Noise Creators, he decided from the start that a podcast would be a component of the site. It’s a decision that’s paid off in spades. “We ask everybody who comes to us, ‘How did you hear about us?’ And the overwhelming answer is ‘I’ve been listening to the podcast.’”

For Emery’s Matt Carter, podcasting isn’t just a fun side gig, it’s a way forward as an artist. Co-host of the wildly popular BadChristian Podcast, Carter premiered each track from Emery’s 2015 album You Are Not Alone on his other podcast, Break It Down. “We sold more in the first week of our [independently released] new album than we did of our last album on Tooth And Nail,” he says. “And that’s, I’m positive, because of the podcast.” And it’s not just album sales that have spiked. “We sell more tickets than we did two years ago, for sure. Everything you do helps every other thing you do.”

Carter has a vision for the future of podcasts in our scene. Last year, along with colleagues Nick Bunda (BadChristian) and Mike Mowery (Outerloop Management), Carter launched Jabberjaw Media, a network of likeminded underground music- and culture-focused podcasts. For him, it’s not just about being able to sell ads for a larger listenership—it’s about giving a boost to the scene’s podcasters at large. He notes that “a community is the best way to promote something. That cross-promotion is valuable because people really care.”

Even if the payouts aren’t as immediate or quantifiable for every artist as they’ve been for Emery, as the medium continues to grow, there’s reason to hope. “I kind of assume that if I keep doing it and I keep getting better at it, that something good will come of it eventually,” says Pryor. “Even if that’s just people being like ‘I dig your podcast.’ That’s kind of nice.”

Right now there are more great podcasts than you could ever find time to listen to. Here are a few that should scratch your itch for revealing chatter with your favorite artists.

Podcast: Nothing To Write Home About
The Host: Matt Pryor

Their Cred: Frontman for emo heroes the Get Up Kids

About The Show: Prior’s even temperament and genuine curiosity has a way of disarming his guests from across the music scene. The best episodes are akin to a casual chat between old friends; Prior’s friends just happen to be folks like Saves The Day’s Chris Conley and Jim Adkins of Jimmy Eat World.

Check This One First: Any “Tuesdays With Reggie” episode. “All the ones that I do with James Dewees [of Reggie And The Full Effect] are pretty funny because he’s a funny dude.”

The Hosts: Steven Smith, Jonah Bayer and many more

About The Show: “The whole premise of the podcast was, when we wrote for FUSE, we’d get all of these cool guests and we’d go in the green room and have these great conversations,” says Bayer. “We were originally going to call it Steven’s Untitled Podcast, but I think FUSE owns the name or something.” As the podcast has grown, it’s branched beyond music, featuring guests like designer Mark Capicotto of Glamour Kills and Saturday Night Live’s Vanessa Bayer (Jonah’s sister).

Check This One First: Fat Mike of NOFX. “Probably the craziest interview I’ve done in my life.”

Listen to the episode right here.

Their Cred: Producer, author of “Get More Fans: The DIY Guide To The New Music Business,” punk lifer

About The Show: Noise Creators—an offshoot of Cannon’s producer-finder service of the same name—focuses on the nuts and bolts of production and songwriting. Want to know how producer Joey Sturgis creates that signature guitar tone, or what goes down in the studio with Thrice drummer Riley Breckenridge? Nobody breaks it down in more detail.

Check This One First:  “I think the Alan Douches [mastering engineer for Brand New, the Wonder Years, literally thousands more] and Sam Pura [producer/engineer for the Story So Far and Basement] interviews are fantastic.”

About The Show: Vombrack and a host of friends collected over years of touring tell their stories of a lifetime on the road and in the scene. Episodes can be lengthy, but guests like Kurt Travis and ex-Glassjaw and Saves The Day drummer Durijah Lang can bring the goods for as long as the tape rolls.

Check This One First:  Nic Newsham of Gatsbys American Dream and the Money Pit. ”He was just cracking me up for the whole episode. I think the ones that are my favorites are the ones I’m laughing the most in.”

About The Show: Chuck and Godless are two of the smartest guys in metal, bringing a witty, intellectual bent to conversations with guests across the heavy music scene, from old guard legends (Megadeth’s Dave Mustaine, Phil Anselmo of Pantera) to current heroes like Keith Buckley of Every Time I Die.

Check This One First: Chris Adler of Lamb Of God. “It was a revelation that he listened to our podcast before we did the interview with him. We talked about everything from music to his family to his restaurant.”

Their Cred: Veteran rock journalist and author of Your Favorite Band Is Killing Me: What Pop Music Rivalries Reveal About the Meaning of Life

About The Show: The newest podcast on this list, Hyden brings a lifetime of musical knowledge and insight to interviews with current acts like Modern Baseball, Deftones and the Hotelier, and intelligent conversation with fellow music journalists like the inimitable Chuck Klosterman and Michael Azerrad, author of the definitive work on ’80s punk, Our Band Could Be Your Life.

Check This One First: “Scan the topics and find one you like. Listen to it, and if you like that one, try something else. I feel like that’s the way people listen now.”

Their Cred: Founder of the very site you’re reading

About The Show: The AP Podcast has been dormant for a while, but archived episodes remain online. Revisit classic conversations with everyone from Andy Biersack and Max Bemis to Pierce The Veil and All Time Low dating as far back as 2007, because with podcasts—just like with your favorite bands—AP was there first.

Check This One First: Let’s be honest, they’re all great. Now get listening!

Check out episode #61 with Andy Biersack.