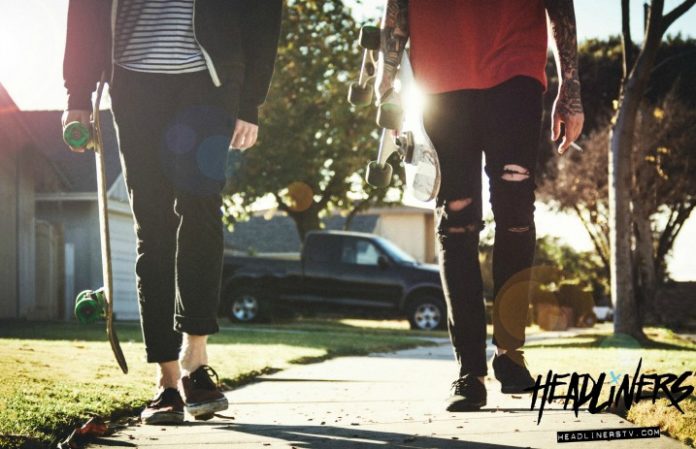 In 2003, Fall Out Boy, Blink-182, Green Day and more were paving the path of pop punk—topping the charts and blasting through speakers across the country. Headliners is a web series set in Chicago during the scene’s heyday and it shows this world from the view of one young, up-and-coming band and a seasoned record label head both struggling for success. The project is the brainchild of Richie Gordon and Kim Fortson, the latter of whom hammered out the scripts that were pitched to some of your favorite bands—including Anberlin and Yellowcard—to sign on as advisors and executive producers. The duo are joined by tech guru Austin Hammer to complete the Headliners team. Look below for reasons to start getting stoked on this series, as told through an interview with Gordon.

1. It’s fueled from the fan perspective, making it instantly relatable

The trio behind the series are fans of the scene, with Gordon citing Blink-182, Third Eye Blind, the Goo Goo Dolls, Yellowcard and Jimmy Eat World as some of the artists who introduced him to the genre. Despite this, none of them were the most musically inclined growing up, at least when it came to performing music themselves. Fortson was in marching band for six years where she also acted as captain before letting it go in order to focus on college. Gordon played drums for seven years, describing his peak as when he played Sum 41’s “Fat Lip” at the school talent show with Glee’s Darren Criss. “He was the cool eighth-grader, and I was a sixth-grader, but I was the only one who played drums in the school of 200 guys,” Gordon says. Hammer also played an instrument, but like the other two, never went far with it. “I think it was one of those things that because we never got the chance to be in the kind of bands we wanted to, that romanticism had us seek out working with these [artists], and it turned out it led to a really cool story,” Gordon says.

2. A day at Warped Tour and a conversation with Anberlin’s tour manager inspired the idea

Gordon graduated from the University of Southern California’s film school with the dream of being a music video director. He attended Warped Tour 2014 with girlfriend and screenwriter Fortson, where they had a nostalgic blast, going from stage to stage and seeing some of the bands they grew up listening to. “Anberlin was there doing their final farewell thing, so I felt like I should call them and make sure someone is capturing their final three months as a band before they go into indefinite hiatus,” he says. He got a hold of their manager, Kyle Griner, and began the conversation by trying to pitch why he was qualified to make a tribute, but it led to the two discussing different perceptions of the scene. “It got really interesting when he said something along the lines of ‘even a tour bus can feel like a cubicle when you’ve been there for a while.’ I was so intrigued, and I was like, ‘Well, what do you mean by that?’” Gordon ran with the idea that the scene isn’t always what it’s cracked up to be and tried convincing a busy Fortson to pen the script. After months of tossing his own version of it at her for edits, she caved and began writing her take in early 2015.

3. The series isn’t just rockstar cliches and is more like a blend of Friday Night Lights and Entourage

Hoping to avoid that stereotype of “sex, drugs and rock ‘n’ roll,” the trio worked hard to keep it real. “Even a show like [HBO’s] Vinyl that’s about amazing artists, it kind of goes back into the stereotypes and doesn’t really make these rockstars relatable,” Gordon says. “We really felt these rockstars were more human than the gods everyone [portrayed] them as.” While they may be avoiding the Vinyl approach, they are drawing upon the somewhat documentary filming style of Friday Night Lights and the fictional stars, manager and friends in the real-life Hollywood setting of Entourage. “We always joke that it’s going to be like if Friday Night Lights and Entourage had a punk rock kid,” Gordon says.

4. Yellowcard’s Ryan Key is producing mashups of several of the scene’s artists

Yellowcard’s Ocean Avenue is arguably one of the most iconic records to come out of 2003, so it makes sense that the team would call upon frontman Ryan Key to helm producing duties of the show’s music. If you’ve ever wondered what Yellowcard would sound like mixed with Anberlin or the Word Alive with the Rocket Summer, then you may be in luck. “For season one, Ryan Key is actually producing everything, which means he’s going to be working with all these individual songwriters of all these different bands to [blend]what you get from a Yellowcard album with Bryce Avary or with Christian [McAlhaney of Anberlin],” Gordon says. The first track to surface was “Moving On,” written by McAlhaney followed by “Back From The Underground,” a collaboration with Forever The Sickest Kids’ Caleb Turman and Austin Bello who wrote the track and provided backing vocals.

5. Social media plays a large part in the process

The rise of social media will definitely have an influence on the plot. “I think as teenagers at the time, we thought [social networking] was a cool way to listen to music, but the reality—10 years later—is that it’s fundamentally shifted the world,” Gordon says. “No one that’s older than a millennial gets it, and that’s why we need to go tell this story.” The script plans to play off the launches of Myspace, Facebook and YouTube and how those affected the music scene. “Myspace may have made certain bands and ended up killing others when the fans left and went to Facebook,” Gordon says.

6. State Champs want to be an on-screen band

One of the perks of Kickstarter is donating to a project you deem worthy of your hard-earned cash and getting much more in return. With Headliners’ Kickstarter, your donation could land you and your friends a role as a rival band, something modern day pop-punkers State Champs are very interested in. “We haven’t talked about cameos or anything, but I know the State Champs guys want to be a fictional band in 2003 because obviously they weren’t around then,” Gordon says. While that’s not a guarantee, the group are available to be a real band in your backyard or garage for you and your 100 closest friends as part of the Kickstarter campaign—the Word Alive are also available if they’re more your style. In addition to that, all the bands involved are partners of Tessellation, Headliners’ parent company launched by Gordon, Fortson and Hammer. “They all have stock in the company, so they’ll all reap the benefits of not only this show but actually every show we make even if it doesn’t involve rock ’n’ roll or punk rock or anything in between,” Gordon says. So in the long run, even if the New Yorkers don’t get the airtime, they still garner some impressive perks.

While many 20-somethings (and younger) may not have been old enough to bask in the glory that was Nirvana’s heyday, that doesn’t stop them from binge-watching content about them. Gordon is one of these people, and is using the idea of popular bands of the past influencing popular bands of the present to reel in the younger viewers. “I was definitely too young to remember Nirvana in their prime, but what’s been fascinating for me as a lover of music has been to watch all the documentaries or read the articles of whether people believe Courtney Love is really the one who killed Kurt or even just how Nirvana’s music has influenced bands that came after,” he says. Gordon hopes that same piqued interest lies within present day teens who may have been too young to appreciate Blink-182, Green Day and more in their prime but would still be game to learn more about those artists as they may have influenced some of their favorites now. On the flip side, Gordon recognizes Nirvana in the ’90s could be like bands in 2003, stating that older friends of his have shared that not many really got what Nirvana was doing at the time, and it took looking back to understand their everlasting influence. “While I know a lot of people will scoff at holding some of these bands at the same level as Nirvana, I think there were certain acts doing things that will warrant them to get introduced into the Rock and Roll Hall of Fame,” he says.