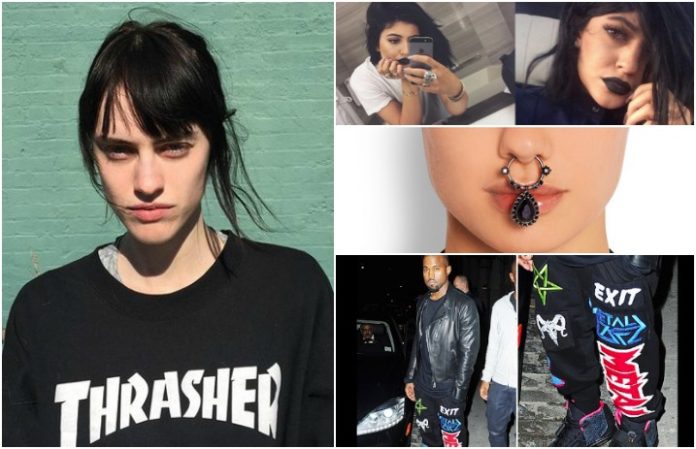 Ever since Vivienne Westwood gave fashion a punk-shaped kick in the butt in '70s Britain, designers have looked to our ripped and studded world for inspiration. When Kim Kardashian is seen out in a leather jacket covered in punk patches, it’s a pretty safe bet that her main priority is looking cool (and it was a cool jacket, let’s be honest) rather than telling the world what a huge fan she is of obscure U.K. punks Anti System. Here are some other times the worlds collided.

Earlier this year, Vogue declared Thrasher skate magazine merch “every cool model’s off-duty staple.” Mastering a kickflip or loving Blink-182’s early material weren’t listed as requirements to wear one, but Vogue’s style editor did say he only wore one after learning to  skateboard, so that’s something.

Why spend a few dollars getting a real septum piercing when you can spend $235 on a fake one that’s so big you probably can’t eat while wearing it? OK, so there are other, more sensible false septum rings on the market. Rihanna, Lady Gaga and even Jessica Biel have been spotted wearing them, but nothing says punk quite like the old-school horseshoe ring.

A gothic pout made it onto the Marc Jacobs catwalk last year, and black lipstick is now such a makeup staple that Kylie Jenner’s lipstick collection will probably soon include no less than three jet-black shades.

Wanna look like you like metal even if you’ve never listened to it? Take lessons from Kanye and wear something covered in fake band logos.  His garish pants are from British line Kokon To Zai, which frequently use heavy metal, biker and tattoo-style aesthetics in its designs.

Sorry, mall punks—Taylor Swift has single-handedly put chokers in the mainstream again by wearing one to Coachella and declaring them “the new flower crowns.” Actually, we shouldn’t put all the blame at her feet—Dior, Vuitton and Chanel all had chokers on their spring/summer ’16 catwalks.

Back in the Myspace days, multicoloured hair—or at least a flash of blue or green in your bangs—was almost a requirement, and it’s actually a punk throwback. Kate Moss took to the catwalk with pink hair as far back as 1999, and in 2011, the designer Meadham Kirchoff went full Instagram unicorn on the models.

Basically everything Hedi Slimane does

Fashion designer and photographer Hedi Slimane was formerly the creative director for Saint Laurent, and three years ago he took his love of rock one step further by getting Marilyn Manson to model the men’s collection. Slimane's music-driven aesthetic influenced the brand's grunge/punk collections during his reign as creative director.