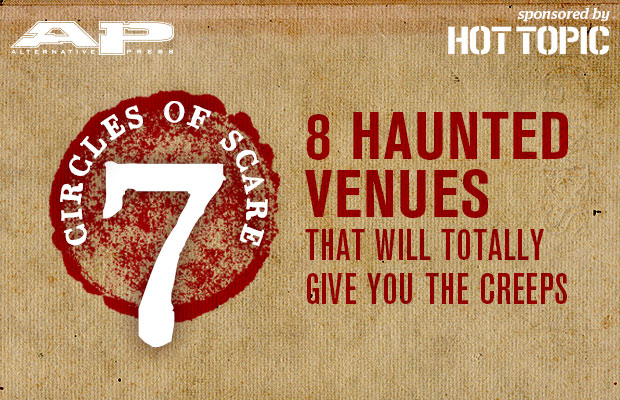 Last week, we curated the ultimate Halloween binge-watch marathon. This week, we’re sharing the legends of some spooky places some of your favorite bands might have played.

Do you have ghost stories from concert venues? Tell us in the comments!

While I'm typically a skeptic when it comes to all things paranormal, I will freely admit that my visit to the Hotel Congress, which houses popular Tucson, Arizona venue Club Congress, sufficiently creeped me the eff out. Without even knowing its full lore—which includes unexplained fires, the apprehension of notorious gangster John Dillinger, suicides, heart attacks and more—the hotel's '20s and '30s period preservation (modest rooms, steam heat, antique radios) and old-timey charm make it feel like something out of The Shining. Upon load-in, I met a bartender who had been working there since 1959 (and then never saw him again, so that's pretty spooky), and managed to explore the creepy, deserted hallways and rooms. Apparently, travelers have encountered the spirits of guests who “never checked out,” and rooms 214, 242 and 220 are considered to be especially haunted. —Philip Obenschain

This Gothic Revival-style music hall was built in 1878 and is notoriously one of Cincinnati’s most haunted spots—so much so that they even hold guided “ghost tours” at night. Not only was this venue built on the site of Cincinnati’s old Commercial Hospital & Lunatic Asylum; it was also built over two old cemeteries, one of which was a Potter’s Field (a place where they threw “unknown” dead people). You heard it, folks: built on a graveyard and an asylum. This was even enough to get the crew of Syfy’s Ghost Hunters to film an episode. They literally can’t stop digging up bones at this place. First, in 1927, they unearthed a “valley of death”—around 65 graves. Then in 1988, while digging an elevator shaft, workers excavated 207 pounds of bones. More “skulls, bones and caskets” were found again in 2010, according to the Cincinnati Enquirer. Screw this place, man. What types of hauntings have been reported here? Many employees of the hall have described various forms of paranormal activity: ghosts, figures wearing Victorian-era dress, angry whispering, strangely “beautiful” music and more. One now-famous account reads, “One of our employees came down here one day during our season when we were dark and he brought his little three-year old son Charlie with him. They went out on stage and Charlie was enjoying pretending like he was performing. All of a sudden, he looked over and said ‘Daddy, who's that man in the box?' That was (then Cincinnati Symphony Orchestra Music Director) Jesús López-Cobos' box, which is box 9, and his father Tom said, 'There's nobody in the box, Charlie.' [Charlie then said] 'Yes there is. He's waving at me right now.’'' —Matt Crane

“Shut up! You’re lying!” New Years Day frontwoman Ash Costello is grinning incredulously between me and her bandmates, just short of slapping us under the assumption that we’re trying to scare her. While she was gathering her laundry from the room down the hall, I had been prepping the rest of the band for our impending ghost hunt for the legends of the venue, primarily that of the ominous “man in the yellow raincoat,” the apparition of whom staff and concertgoers claim to have seen. I told them that at my first Agora show, unaware of the ghost stories, I distinctly felt like someone had splashed cold water on the back of my legs. Upon reaching down, I found that my tights were dry and there was no one behind me who could have spilled liquid. Still, a strange wet sensation remained tingling where I had felt “water” minutes after the encounter. So, why did Ash find that so hard to believe when we told her? As it turns out, she had experienced a similar sensation while blowdrying her hair earlier that day. “It literally felt like someone took a cupped hand of water and [threw it] at the back of my neck,” Costello explains in our ghost hunting video.  “I looked all around the ceiling and there were no pipes, no cracks, nothing that water could have come from.” Creepy. As we explored the building, we encountered other odd things like doors opening on their own and what looked like bloodstains in the basement. —Cassie Whitt

Since its establishment in 1925, everyone from Lynyrd Skynyrd and ZZ Top to Paramore (who recorded their live CD/DVD, The Final Riot!, at the venue) and Of Mice & Men have graced the stage of Chicago’s Congress Theater. Regardless of its impressive resume of past performers, speculation of potential paranormal activity within the venue has been brought to light on more than one occasion; so many times, in fact, that an episode of Syfy’s infamous show, Ghost Hunters, hosted a episode within the walls of the theater. As the Chicago Sun-Times reports, some of the Congress’ past employees have gone as far as to quit their jobs due to the sheer uneasiness they felt while being inside the theater. Notable sightings include apparitions in both an aisle and on the stage itself, as well as hearing footsteps in the basement (which is where it’s rumored that the mob used to meet in the 1930s). While the venue was shut down in April of 2013 due to an array of incidents and safety code violations, rumors are sparking up that it has potentially found a new owner. Nonetheless, if you ever find yourself at the Congress in the future, whether you go with friends or not, it doesn’t look as though you’ll be alone. —Tyler Sharp

Only two months before Detroit filed the largest municipal bankruptcy claim in U.S. history, Detroit-native Jack White made headlines by saving the city’s famed Detroit Masonic Temple after he personally paid off its debts, which exceeded $150K. The history of this iconic Masonic Temple—which consists of over one thousand rooms, including a concert venue—is just as grim as its near demise. Completed in 1922, architect George Mason designed what is now the largest Masonic Temple, but this fascinating architectural success would also lead to Mason’s death. The construction of the temple left Mason bankrupt and his wife left him soon after. It is said that Mason climbed atop the 16-story building and jumped to his death. People who visit the temple claim to see doors mysteriously slamming shut, the figure of Mason walking up the stairs toward the roof and the constant eerie feeling of being watched. —Nick Major

Located on a block on Detroit Avenue in Lakewood, Ohio, the Phantasy Theatre has a number of performance spaces that are rich in Cleveland's rock history. There’s the Phantasy Theatre, a 1,000-seat auditorium; the Phantasy Nightclub, a smaller, intimate club; and a dance club called the Chamber, which spins the current tracks from the underground EDM, goth and industrial/electronic-rock scenes. And they’re all haunted. There have been reports of music playing in the nightclub when the place was locked and empty, as well as sightings of apparitions ranging from a screaming nude woman; another woman in white; a couple running up the steps between venues; a little boy who plays with the owner of the building’s dogs, as well as numerous photos taken of orbs floating in the various performance spaces. The facility has been featured on the Biography channel program My Ghost Story and has been investigated by respected paranormal investigators like the Ohio Researchers Of Banded Spirits. No word on whether any of these investigations yielded information on other ghosts, like the myriad of bands who have walked on the Phantasy complex’s stages over the past four decades. —Jason Pettigrew

I grew up in Northern Illinois, only a 90-minute drive to Milwaukee, yet only ventured up to the Rave a handful of times during my high school and college years. Why? Because that place is haunted as shit. First off, Jeffrey Dahmer lived in the hotel across the street, so there's a whole bunch of bad juju all over the place. (That happens when someone murders young men and then eats them, y'know?) Secondly, the place used to be both a fitness club as well as a men's shelter, and as legend has it, someone once drowned in the pool that's deep inside the building's innards (which is why it's kept locked at all times—though it's not hard to break into, if you're a touring band that has time to kill). Buddy Holly's final tour, the 1959 Winter Dance Party Tour, kicked off at the Rave in the Eagles Ballroom; he died in a plane crash days later. I've been at the Rave on tour both with the AP Tour and Taste Of Chaos, and both times I witnessed lights turning themselves on and off in the basement, showers randomly running when no one was around and I even got myself locked into a fire exit stairwell when exploring the building. (I had to sheepishly leave through the emergency exit at the bottom of the stairwell, but even worse, no alarm went off.) This place is creeeeeepy, y'all.—Scott Heisel

Serving as an iron blast furnace for nearly a century, Sloss Furnaces in Birmingham, Alabama, has since been repurposed as a concert venue and is revered as one of the most haunted places in the country. It is believed that while still in operation, numerous workers—who were forced to work in the unbearably hot conditions—were injured and lost limbs, while many others died from falling into molten steel and being exposed to lethal doses of carbon monoxide. Reports of steam whistles screaming by themselves are plentiful; the Halloween season seems to be the most popular time these paranormal reports are filed. Some incidents are as extreme as physical assaults upon individuals, such as burns on their bodies. Numerous paranormal teams have visited the area and many agree it is a place full of angry souls. There is an annual “Ghost Tour” around the creepy facility, so if you ever find yourself in Birmingham around the Halloween season and are willing the take the risk, go ahead and see for yourself if this place is truly haunted. —Nick Major