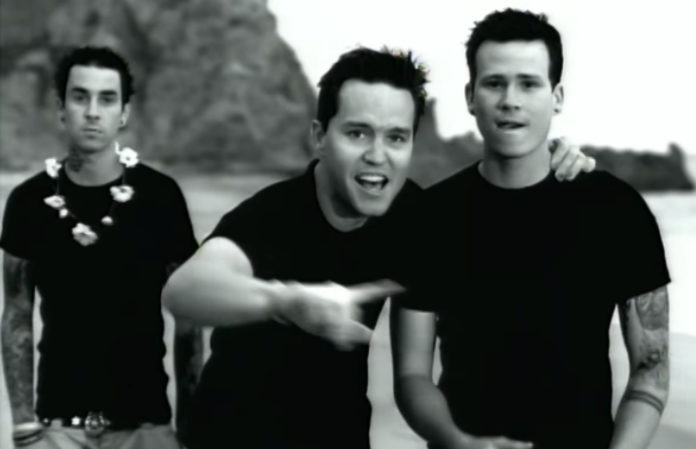 They say that imitation is the sincerest form of flattery. The art of the spoof is one that has been polished and perfected by some of the mainstream masters (looking at you, Weird Al), but that doesn’t mean several alternative bands haven’t taken a crack at it, too. See how many video references you can spot in this list of seriously funny homages!

At the turn of the century, this iconic pop-punk video gives the entirety of the late ’90s a run for its money! The most successful video off Blink-182’s  third album Enema Of The State, it received Best Video at the Kerrang! Awards and Best Group Video at the MTV VMAs in 2000—solidifying Blink’s legacy in music video fame.
Parodies: Backstreet Boys, 98 Degrees, NSYNC, Britney Spears, Christina Aguilera

“GIRL ALL THE BAD GUYS WANT” – BOWLING FOR SOUP

The first of what would be many sing-a-long hits for BFS, this playful video addresses the infamous feud between two renowned nü-metal bands. The catchy tune was nominated for a Grammy in 2003, losing out to No Doubt’s equally catchy “Hey Baby,” but we’ll always remember this song as the nice guy anthem for the books!
Parodies: Staind, Limp Bizkit, Slipknot

You know it’s a real spoof when the artist behind it pokes fun at their own career! Sum 41 makes the claim that “the number band thing is out” in this comical spoof, comparing themselves to similarly named punk acts like Blink-182 and, of course, “Green Day 75.” The song peaked at No. 7 on the U.S. Hot Modern Rock Tracks chart in 2002.
Parodies: the Hives, the Strokes, the White Stripes, the Vines

If there’s ever a time where you need to show someone a complete history of rock music in under five minutes, just show them this video. The clever parody showcases all alternative genres from the ‘50s to present day. It reached No. 1 on two Billboard charts and scored two Grammys and a VMA.
Parodies: Elvis Presley, the Beatles, Jimi Hendrix, Cream, Parliament-Funkadelic, David Bowie, Slade, the Sex Pistols, Danzig, Poison, Nirvana

If you were looking for a video that parodies more recent pop talents, then this is the spoof for you! After All Time Low’s brief signing to Interscope Records, the label did its best to make the band’s sound more radio-friendly—a tale documented in this humorous visualization. Can we just say #Exposed?
Parodies: Lady Gaga, Justin Bieber, Katy Perry

To put it plainly, absolutely no one is safe from the clutches of this garage punk act’s satirical video. In yet another journey through the ‘90s, the band uses DIY sets and costumes to recreate the quintessential videos we’ve come to love over the years.
Parodies: Sugar Ray, Suicidal Tendencies, Missy Elliott, Devo, Weezer, Eminem, the Beastie Boys, Jamiroquai, the Hives, Oasis, Soundgarden, Korn, Britney Spears, George Michael, Green Day

One of three videos for this song (the first as basketball players and the second featuring Doug The Pug), the latest version is a revamp of the classic NSYNC hit “It’s Gonna Be Me.” It even has cameos from two of the original boy band members, Chris Kirkpatrick and Joey Fatone!
Parodies: NSYNC

Similar in fashion to various seminal OK Go videos, AJJ (formerly known as Andrew Jackson Jihad) does their attempt at a one-take spoof. Dressed in color-coded shirts reminiscent of the Wiggles, the video is chock full of quirky props and choreo, ending with a behind-the-scenes featurette.
Parodies: OK Go