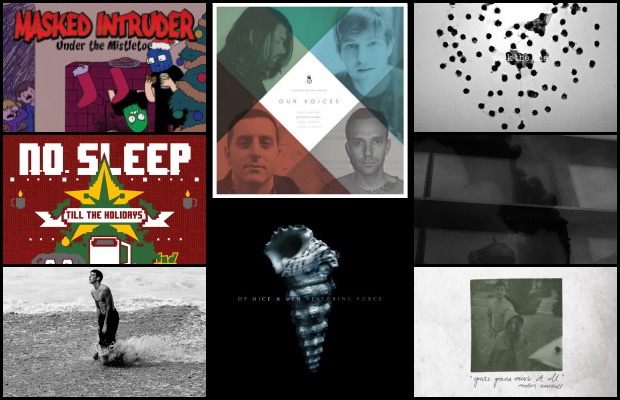 Sometimes the rock world can get noisy, and we don’t just mean in decibels or fuzz. Often the signal-to-noise ratio is more noise than signal. But no worries; we read, listen to and watch everything so we can sort it for you. Here are some of our favorite new songs and videos of December 2013

PURCHASE
I still go into record stores on the weekends because I enjoy actively putting myself in the situation best described as “pleasantly surprised.” And I was pretty stoked last week when I discovered Cavern Of Anti-Matter, the new electro/motorik/post-rock trio of guitarist/Stereolab co-founder Tim Gane, cool-as-fuck drummer Joe Dilworth and synth/sequencer op Holger Zapf. The trio's debut album—a two-record set, no less— features everything from guitar textures that segue nicely into tracks by Mogwai and/or Sigur Ros, as well as some full-on head-nod grooves that will make you wanna cruise the spaceways. I know what you're thinking: “Whatever, dogface. My superior metalcore sensibility beats the hell out of your middle-aged post-rock.” I laugh because most of your favorite bands are gonna side with me on this one—except for [REDACTED], because they're a bunch of cloth-eared careerists with nothing to say. [JP]

DOWNLOAD
Classic country fans are going to be so bummed out. Some may not even immediately recognize this as the Johnny Cash classic “Walk The Line” when they hear former My Chemical Romance guitarist Frank Iero’s droning take on it. With a simple rhythm and building noise, Iero shapes his own signature sense for grating melody around the bare bones of the original. “Walk The Line” is one of two covers–the other being the Ronettes’ “Be My Baby,” which was temporarily available online earlier this year–that comprise for jamia…, Iero’s first solo effort, released via his own B.Calm Press Dec. 10. [CW]

MASKED INTRUDER – “Under The Mistletoe”

DOWNLOAD
I did the math the other week, and I'm pretty sure that I've seen Masked Intruder more times than any other band this year, at seven. I have yet to get sick of their gimmick, and their newly released Christmas 7-inch (and color-coordinated ornaments!) is just the latest thing I've fallen in love with. There are a surprising amount of sonic layers to this Christmas original, so as silly as it might sound, listen to this track on a good pair of headphones. [SH]

MODERN BASEBALL – “Your Graduation”
I’ve been listening to Modern Baseball’s 2012 debut Sports on repeat ever since we put them in this year’s 100 Bands You Need To Know issue. Last week, the Philadelphia four piece announced a new album (You’re Gonna Miss It All), a new tour supporting the Wonder Years and premiered a new song, “Your Graduation.” Sports introduced listeners to the band’s sharp-tongued, self-deprecating emo-rock, and from the sounds of “Your Graduation,” things are just getting better for the band, musically. [BM]

DOWNLOAD
For the first single off their upcoming album, Restoring Force, Of Mice & Men make their first venture into anthemic rock music. “When your reflection in the mirror similes back, it lies/You know it,” Austin Carlile shouts more than screams. If “You’re Not Alone” is any indicator of what’s to come on OM&M’s new album, we can expect the sound of a successful metalcore band appealing to a wider audience—perhaps even rock radio. [MC]

ANTHONY RANERI – “String Me Along”

DOWNLOAD
Most times when the singer of a popular band does some solo work on the side, it ends up sounding pretty damn close to their day job. Not so with “String Me Along,” the new track from Bayside frontman Anthony Raneri. It's a bouncy, piano-and-synth-bass-assisted pop song that falls somewhere between Billy Joel's '70s output and something off alternate-universe Rivers Cuomo's fifth solo album. (In this scenario, Rivdawg embarked on a successful solo career as a quirky singer/songwriter after Weezer broke up in 1997.) Did I mention how cute the music video is? Just watch! [SH]

DOWNLOAD
I’m a sucker for any Christmas song (see last month’s pick), and if it’s free, that’s even better. For the second year in a row, No Sleep Records is giving away a free compilation, No Sleep Till The Holidays 2. Allison Weiss’ contribution is a sweet, slightly sad, but mostly hopeful acoustic number that is almost enough to make me stop grumbling about all the snow Cleveland has gotten recently. Almost. [BM]