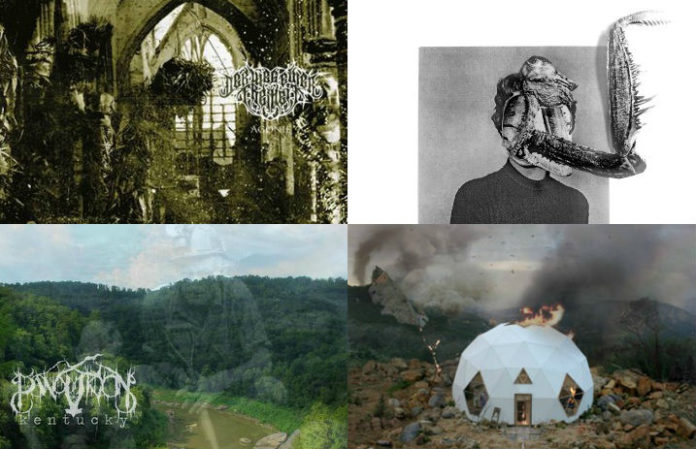 Trying to get around to even a fraction of the metal releases that come out in any given year is a challenge. Right now on Bandcamp, there are 54 pages of newly added releases for just this week. Even if 20 of those pages are legitimate new records and not re-releases, that’s still 160 releases to listen to.

Inevitably, you’re going to miss quite a few fantastic releases each year, so here are a few (relatively) recent ones that you likely missed and really ought to get around to checking out!

Australia's Aquilus (aka Horace Rosenqvist) is a one-man project who combines orchestral elements, folk and black metal into something utterly unique. His 2011 album Griseus is one that evokes a persistent feeling of far-off dread as if you’re lying in wait for just the right moment, watching through the dead trees and there’s a chill in the air. Frankly, the whole album is unsettling.

Yearning existed from 1996 to 2010, right up to the untimely passing of vocalist and multi-instrumentalist Juhani Palomäki. Their 2003 record Evershade, much like the band’s other work, is an unsung classic. It’s the sound of a neo-classical trip through dizzying cathedrals that echo with loss, with gentle acoustic guitar passages and operatic vocals that will hauntingly resonate forever.

German black-metal unit Der Weg Einer Freiheit only recently started garnering more attention thanks to their outstanding 2015 effort, Stellar. Before that record, their only other release was their 2011 EP titled Agonie. Clocking in at just over 25 minutes, it is a barrage of rapid-fire melodies, calming clean sections and even a guitar cover of Erik Satie's 1888 piano piece, “Gymnopédie No. 1.”

Shylmagoghnar only have one record out, but it sounds like the group has been at it for years. 2014's Emergence is everything there is to love about melodic death metal, viking metal and progressive metal, all rolled up into one fantastic 51-minute journey well worth the time. Oh, and the opener is an eight-minute instrumental, but rest assured, the hell will soon come via frontman Skirge.

Obsidian Kingdom's debut LP, Mantiis, came out in 2012 and I'd be lying if I said I still didn't listen to the record a few times per month. Mantiis is an album that plays as one giant song, and really toys with mood a lot. What starts off as an acoustic ballad might burst into blasting, and what starts off as a heavy riff might end up with trumpets and clean singing. It's a wild, gorgeous ride.

Galar puts out records every five years or so and hardly plays live, so there's not much buzz around the group—but there should be. Galar's 2015 album De gjenlevende was a black-metal masterpiece that's as pummeling as it is beautiful. Every song interweaves clean choral vocals, acoustic guitars, bassoons and pianos in a very natural, unforced way, making it a one-of-a-kind listen.

Genghis Tron's lifespan was entirely too short, producing two batshit insane records and a few EPs between 2004 and 2010. The best among them was their 2006 effort, Dead Mountain Mouth. Essentially, the record was what would happen if a grindcore band with a drum machine kicked out their guitarist and replaced them with a downtempo-loving Super Nintendo. The results still hold up today.

In 2012, I was introduced to Austin Lunn's solo project Panopticon by way of his record Kentucky. I then proceeded to listen to the album incessantly for weeks on end, mainly due to my disbelief that someone could so seamlessly blend American folk and bluegrass music with metal, all while telling an educationally horrifying history of the state of Kentucky. To this day, I am still floored.