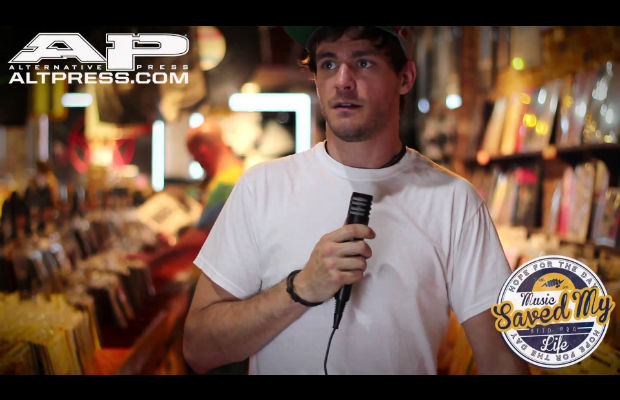 “Music saved my life.” Some call the phrase accurate and connect to it. Some say it's overplayed and has lost meaning. Some discredit it for not making literal sense. Regardless of how you perceive it, something about the phrase has caught on and resonated with a mass number of people, which is truly remarkable.

Still, the pressure that comes with telling a band “you saved my life” may become overwhelming, and it may be time to reevaluate the implications of it and what you are really saying when you use that phrase.

Here are a few ways music can provide the tools and armor needed to change someone's life, as told by the musicians featured in our “Music Saved My Life” series in partnership with suicide prevention and awareness nonprofit Hope For The Day.

“I think so many people look at it as a strange community [with a] bunch of big, tough guys beating the crap out of each other. Whereas people view it like that, I view it as this beautiful thing that has come out of anger and frustration and put it into a positive thing.

“I think so many people can’t find the right outlet for that, and that’s why people go to bars and get into fights and stuff like that. While people were doing that and [while] kids in my high school were going to parties and getting messed up and doing that kind of stuff, my friends and I opted to go to shows and talk about… bands that we liked, then we started writing our own music and talking about how we were feeling and getting that out into the world.”
–Ned Russin, Title Fight

2. MUSIC CAN EXPRESS MORE THAN WORDS

“When you’re going through stuff [as a teenager], you don’t really know how to express [it] sometimes in words. So, sometimes just the simple act of being aggressive on a microphone and screaming or getting behind a drumset or a guitar is just able to do something that words couldn’t do. Essentially, that first moment when I felt something I couldn’t explain in words and was able to channel that through music is when I realized I was going to be hooked for life.

“…If you’re out there and you’re feeling low, you’re feeling down or you’re unsure about the world around you, you’re even thinking about potentially taking yourself out: Life is so fleeting and so beautiful. You do not know what tomorrow holds. I have lost dear friends of mine to suicide, and to this day, it still brings me so much pain…You never know what life will bring. Someone could say a simple phrase to you, and it could change your life around.”
–Jesse Leach, Killswitch Engage

3. MUSIC CAN GIVE YOU A PURPOSE

“I kind of fell into a lot of struggles with alcohol and wasn’t the best kid at school. So, I was trying to figure out what I could hold on to. I got really depressed when I was a teenager, and I really needed something to hold onto, and I found that music was really, like, my saving grace, in essence. The passion [and] the power that music has, the emotion that music can bring to you, the strength… I really started to see how powerful it was, and it made me want to be a vocalist or to be a musician.”
–Jake Luhrs, August Burns Red

“I think there’s something to be said about finding something in your life that you can invest time and energy into because it’s rewarding. And it will show you that you don’t have to thoroughly enjoy or even see a future in what you’re doing in order for it to give you a purpose and a reason to wake up in the morning.”
–Matt Greiner, August Burns Red

4. SHOWS CAN MAKE YOU FEEL LIKE YOU’RE A PART OF SOMETHING BIGGER

“When I was about 15 or 16, bands like Showbread and Embodiment and Blindside were coming through my hometown, and my buddy invited me to go to a show downtown, and I just felt the exhilarating energy and presence that no other show ever had. It was maybe 50 kids there on a tiny stage, but it felt bigger than any arena, more powerful and more emotional, and that’s when I fell in love with heavy music.

“…I think a lot of people see suicide as an escape. They’re just like, ‘If I’m going to feel this way or this is how it’s going to be, then I don’t want to live.’ And it’s so important to always remind yourself that no matter what is going mentally, it’s going to get better.”
–Matty Mullins, Memphis May Fire >>>>