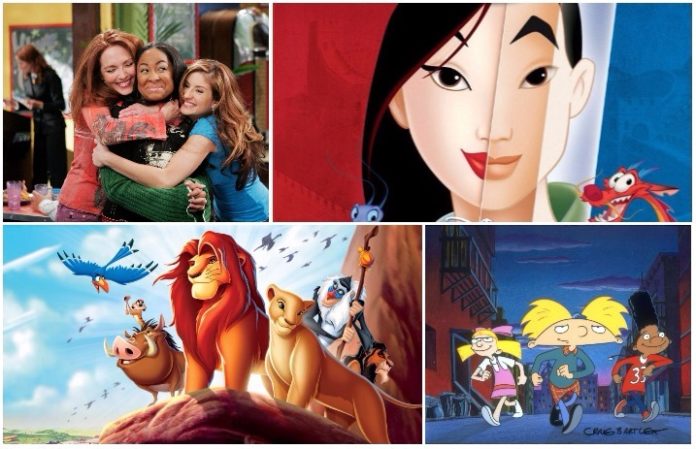 Some love seeing a new take on old favorites, while others hate it and are tired of Hollywood revisiting the same things over and over. But there’s no denying: Remakes, reboots and sequels are a hot commodity. The popularity of rebooting characters consumers grew up with is especially common, with prime examples such as Fuller House entering its third season next month and a live-action Beauty And The Beast dominating the big screen as the top grossing domestic movie of 2017 thus far. With success like that, it’s no wonder so many other titles from the past are being slated for remakes. Head below for just a handful of the upcoming reboots for some of your childhood favorites.

Hey Arnold! ran from 1996 to 2004 for five seasons on Nickelodeon. It even had a film, Hey Arnold!: The Movie, in 2002. And now it’s back: Nickelodeon’s upcoming two-hour special, Hey Arnold! The Jungle Movie, is set to premiere in November and will pick up one to two years after the 2004 finale left off.

Back in July, creator Craig Bartlett revealed the characters will get a modern-day update on their attire. He also said Arnold and his class will be traveling to a fictional island called San Lorenzo that he dreamed about in the Season 5 episode “Parents Day,” referencing the map Arnold finds in his dad’s old journal in the series finale. Later that month, the clip from the film was released, showing how Arnold and his classmates end up heading to San Lorenzo.

Back to work after #D23Expo See you in two years pic.twitter.com/Uz3t0VE3fQ

The 1994 animated adventure of the same name is getting a live-action/CGI reboot slated for July 2019. Jon Favreau signed on to direct the flick after giving a similar treatment to the 2016 reimagining of The Jungle Book. So far, James Earl Jones is reprising his role as Mufasa, while Donald Glover has been cast as Simba. Billy Eichner (Timon) and Seth Rogen (Pumbaa) have also signed on, while Chiwetel Ejiofor is currently in talks to voice Scar. Favreau also announced Beyoncé is his top choice for Nala, but nothing has been confirmed.

That’s So Raven aired for four seasons from 2003 to 2007. The series then got an immediate two-season spin-off, Cory In The House, that followed Raven’s brother and their father when the latter gets named executive chef of the White House. Since that spin-off’s end in 2008, no new storylines have been created for the Baxter family, until this year when Raven-Symoné and Anneliese van der Pol reunited as on-screen best friends raising their own children for Raven’s Home. The first episode premiered July 21, and the rest of the series is slated to air Fridays on the Disney Channel through late September.

My Little Pony: The Movie

My Little Pony began as a line of toys in 1982 following Hasbro’s success with a larger My Pretty Pony in 1981. The first of many animated appearances, My Little Pony: Rescue At Midnight Castle premiered in 1984, and the ponies got their first theatrical film in 1986 via My Little Pony: The Movie. Following that, several more versions of the pony story made their way to the small screen, leading up to the current reboot, My Little Pony: The Movie, set to be released in theaters this October. The film is based on the current TV series, My Little Pony: Friendship Is Magic, which first aired in 2010. The upcoming film brings in many of the main voice actors from the Friendship Is Magic series, while also introducing new characters portrayed by Sia, Emily Blunt, Kristin Chenoweth, Liev Schreiber, Uzo Aduba, Zoe Saldana and more. Sia’s character even has her face-obscuring blonde hair, and the pop singer will contribute a new song to the film’s soundtrack.

The music video countdown show better known as TRL initially ran from 1998 until 2008. Following the success of the return of Fear Factor and Wild ‘n Out, MTV president Chris McCarthy announced the network would be reviving TRL for an October premiere. The new version of the series will include five co-hosts replacing original host Carson Daly and a new studio currently under construction.

Jumanji: Welcome To The Jungle

Jumanji: Welcome To The Jungle is described as a sequel and not a remake of its 1995 predecessor, giving us new characters and a new concept. Welcome To The Jungle is set for release in December 2017, and it follows four teenagers who find an old video game when they’re tasked with cleaning out the school’s basement as part of detention. The teens choose avatars, not realizing they’re about to be transported into the action much like the original film’s board game; but this time they’re morphed into an alternate reality where they become their characters portrayed by Dwayne “The Rock” Johnson, Jack Black, Kevin Hart and Karen Gillan.

The Magic School Bus books followed Ms. Frizzle and her class on their whacky field trips to everywhere from the solar system to inside the human body. The books were published from 1986 to 2010, with an animated series based on them airing from 1994 until 1997. Netflix recently announced a new TV series following Ms. Frizzle’s sister on similar field trips, with the character being voiced by Saturday Night Live star Kate McKinnon.

The original Mulan was released nearly 20 years ago in 1998, giving us the badass story of a girl who secretly joins the army in her father’s place to save him from death. Not much is known about the reboot slated for a 2019 release, but Niki Caro (Whale Rider, The Zookeeper’s Wife) has been tapped to direct. The original gave us iconic tracks like “I’ll Make A Man Out Of You” and the Christina Aguilera take on “Reflection,” but it was first reported in March via an interview with Caro that the reboot will not have any music. Soon after that broke, however, Caro did another interview stating the decision for whether or not there would be any music was not set in stone.