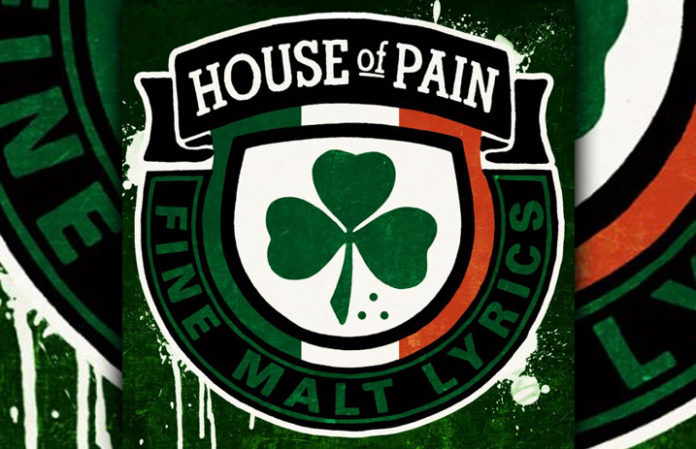 I listen to House Of Pain year ‘round.

In fact, I'm the top House Of Pain scholar on Genius.com.

Saint Patrick’s Day is just a great excuse to make more people aware of how deep the catalog goes. As the group have been quoted as saying: “Jump Around” was the “Louie Louie” of the ‘90s. But don’t sleep on these other House Of Pain classics. Millions of people bought House Of Pain and the followup album, Same As It Ever Was, went gold. Even their final album, Truth Crushed To Earth Shall Rise Again, has several bangers.

Erik Francis Schrody started as a teenage rapper called Everlast under the umbrella of Ice-T’s Rhyme Syndicate. He’s since joked that he’s glad his major-label debut wasn’t a commercial success because he could have ended up being Vanilla Ice. But in truth, his first album had a bit more edge (He did have a song called “Fuck Everyone”). When his high school homey Danny “Danny Boy” O’Connor came up with the logo, artwork and general imagery for House Of Pain, Everlast was onboard, bringing DJ Lethal with him (Never mind that Lethal isn’t Irish-American, he’s honorary to all of us Irish- Americans).

House Of Pain paid respect to the hip-hop greats while carving out their own niche. DJ Muggs from Cypress Hill made the beat for “Jump Around” and played it for a few of his friends, like Ice Cube, who passed on it . Everlast wrote the rhymes and it became a House Of Pain demo, famously dismissed by Joe “The Butcher” Nicolo, whose own Ruffhouse Records later “coincidentally” released the song “Jump” by the group Kris Kross. This earned the record exec the nickname “Joe The Biter,” as heard at the end of the album version of “Jump Around” and later in “On Point,” the first single from House Of Pain’s second album, the incredible Same As It Ever Was. Hardcore kids, punk rockers and metalheads got behind House Of Pain: The group loved the scene back, dropping references to Henry Rollins and G.G. Allin in lyrics, taking Rage Against The Machine on tour and collaborating with Sick Of It All and Helmet.

After the band split (on the same day their third album was released), Lethal joined an upstart rap-rock group called Limp Bizkit. Everlast reemerged with a brand new solo album, Whitey Ford Sings The Blues, which went multi-platinum thanks to “What It’s Like” (and who can forget that track with Carlos Santana?).

They’ve all continued to work together in various formations, from the group La Coka Nostra to the occasional House Of Pain shows and tours. Last year, DJ Frank White, Danny Boy and Lethal dropped the House Of Slaine mixtape, featuring Boston rapper (and co-star of The Town) Slaine, who carries the torch for hard-ass, hard-rhyming, working class Irish American hip-hop brilliantly set ablaze by HOP back in the day.

If these tracks whet your appetite, feel free to check out my complete House Of Whitey Ford playlist on YouTube. Erin Go Bragh!

Easily the second most well known House Of Pain jam, the rock remix garnered considerable airplay from MTV in the wake of “Jump Around.” Said mix was made with Butch Vig, who AltPress readers will recognize as the drummer  from Garbage and the producer behind huge records from Nirvana and AFI. Dennis Leary introduces the official music video. This other video is a rare clip from House Of Pain’s 1993 tour with Rage Against The Machine.

A short but sweet anthem for Everlast’s 6’ 6” accomplice, riffing on the Irish standard, “Danny Boy.”

This is from the soundtrack to the movie of the same name, a cop comedy starring Yo! MTV Raps hosts Ed Lover and Dr. Dre (different Dr. Dre), which featured cameos from all of the hip-hop stars of the day, including House Of Pain. But there’s nothing funny about this track — it’s deadly serious and one of their best.

Top to bottom, my favorite House Of Pain song. It’s got killer horns reminiscent of “Jump Around,” with a smoother, stalking beat. The old soul records, the swagger, the bravado, the wordplay—it’s all here. We get verses from both Everlast and Danny, but this song also contains the only rap verse from DJ Lethal ever committed to wax.

When rumors swirled that Everlast had overdosed and died, the best way to answer was on wax. This song opens House Of Pain’s second album and features some of my favorite lines Everlast has ever dropped. “Pick up my bones, erase my name from off the tombstone.”  All killer, no filler.

I put this one on the list because it’s got my favorite verse from Danny Boy, one of Lethal’s best beats and an answer back to DJ Quik in one of the verses. I’m something of a historian when it comes to ‘90s rap beef. Everlast dissed Quik in a remix to “Shamrocks And Shenanigans,” switching “you make me sick like Strawberry Quik” to “DJ Quik.” The Compton rapper responded with an entire song, but House Of Pain won the beef (yes, I know I’m biased) with a simple little verse in “I’m A Swing It.”

A Top 5 House Of Pain jam, no question, working as the more uptempo counterpart to “On Point” in terms of quintessential HOP.

From the EP of the same name, “Legend” recreates the rap/metal feel of the “Shamrocks And Shenanigans” remix, but with a darker edge.

Incredible verses, incredible beats and amazing work from the legendary Guru of Gang Starr. The late rapper shows his love for House Of Pain by starting each of his verses with a reference to various HOP classics. The song is super-fun, with a couple of nods into Everlast’s spiritual side, which he’d explore more in-depth later.