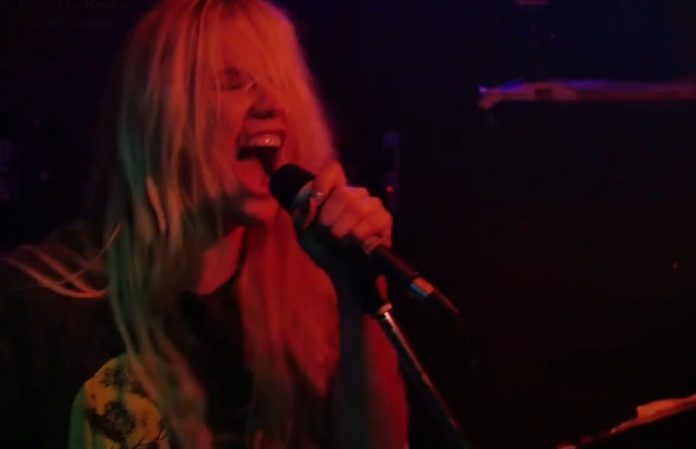 Kesha skyrocketed to mainstream success in 2009 with the release of “Tik Tok.” The track cemented her as everyone’s favorite party girl as she continued her success with sweet  electro-pop anthems such as “Your Love Is My Drug,” “We R Who We R,” “Blow” and “Die Young.” Despite her well-known pop presence, Kesha also has dabbled in the rock world and often discusses her love of the genre. Head below for reasons she rocks a whole lot more than you may realize.

1. She recorded with 3OH!3 and performed at The AP Tour

While Colorado rap duo 3OH!3 are an eclectic blend of electronics and hip hop, they still mix in a little rock here and there, including performing with a full band on tour. The duo first appeared on “Blah Blah Blah” from Kesha’s 2010 debut, Animal. She then returned the favor, showing up on “My First Kiss” on  3OH!3’s second full-length, Streets Of Gold, which was released later that same year. Back in 2009 before either album were released and just months before “Tik Tok” dropped, Kesha jumped on stage at Los Angeles’ Hollywood Avalon club to perform “My First Kiss” with 3OH!3 as they headlined The AP Tour.

2. Alice Cooper thinks “she would much rather be the female Robert Plant than the next Britney Spears”

In 2011, Kesha played the part of a seductive devil on “What Baby Wants” from Alice Cooper’s Welcome 2 My Nightmare. Cooper told NME he expected his fans to be surprised at the collaboration, but that didn’t stop him from getting her involved, as he believes artists shouldn’t be pigeonholed. He also chatted with Billboard about meeting her for the first time at the Grammys and why he wanted to work with her.  “I immediately looked at her and went, ‘This girl is not a pop diva. She’s a rock singer.’ She would much rather be the female Robert Plant than the next Britney Spears.” In 2015, Kesha jumped onstage at the Roxy to show off her rock moves with Cooper’s supergroup Hollywood Vampires. With the help of the Kesha, the group—which also features Aerosmith’s Joe Perry and actor Johnny Depp—performed a cover of Led Zeppelin’s “Whole Lotta Love.”

3. An unreleased collab with the Flaming Lips entitled Lip$ha exists

Kesha made an appearance on the Flaming Lips’ “2012 (You Must Be Upgraded)” from their star-studded album, The Flaming Lips And Heady Fwends. The album was released exclusively for Record Store Day in 2012 before becoming available digitally soon after. Kesha planned to collaborate on an entire album with the band entitled Lip$ha, but its release was allegedly halted by producer Dr. Luke, prior to her highly publicized legal battle with both him and her label Sony Records beginning in 2014. In the midst of that battle, Flaming Lips frontman Wayne Coyne took to Instagram in February 2016 to share a photo of him with Kesha and Ben Folds in 2012 on a night the trio covered Loretta Lynn’s “You’re The Reason Our Kids Are Ugly.” Within the caption, Coyne states he will ask Kesha if he can leak at least one song from Lip$ha as long as it didn’t cause her more trouble, but nothing ever surfaced.

4. She slings a guitar

Kesha performs with a full band backing her, but the pop songstress can also play guitar herself. She often strums along amidst her dancers on “We R Who We R” as seen above.

5. Guster was her favorite band growing up

Kesha revealed in a video blog on her YouTube channel that alt-rock quartet Guster were her favorite band as a kid. In the video, as seen above, she performs her own “Your Love Is My Drug” with friends and mainstream pop rockers HAIM at the Troubadour in LA before jetting over to the Wiltern to sing “Happier” with Guster.

6. She performed with Eagles Of Death Metal at Riot Fest Chicago

Kesha has been spotted jumping onstage with Eagles Of Death Metal several times, but the most notable meeting took place at last year’s Riot Fest in Chicago. She even offered up quality photo proof via Instagram.

This past December, Kesha put together a secret show at the Springwater Lounge in Nashville. The singer performed rock renditions of her hits like “Blow” and the Pitbull collaboration “Timber” in a much more intimate environment than the arenas she’s grown accustomed to over the years. She referred to the project as Yeast Infection, but thus far, the Nashville date is their only reported show.

8. She covered Bob Dylan at the Billboard Music Awards

Kesha hit the stage with Ben Folds on piano to perform American music  icon Bob Dylan’s “It Ain’t Me Babe” for the 2016 Billboard Music Awards. The ballad was a large departure for the artist known for electro-pop numbers, but it was well received as the first televised performance since her legal battle began.

9. Kesha And The Creepies are happening

The day has come that I, now, present to you, Kesha and The Creepies. This project and upcoming tour comes from my deep eternal love of dirty rock & roll and country music. I thrive from making and performing music, and much like a flower with no sun, my soul slowly dies when I don’t get to create and perform. So, for a short ride and in mostly small intimate venues, I will be performing a new creepy creation. It’s been too long. Until I can release my own music I will be reinventing some of my old songs and some of my favorite songs from my musical idols. I’ve hand picked songs from artists that have helped shape who I am and the music I make today. I have missed you, all of you, so if you would like to boogie, come join us. The time has come to get creepy ☠ exclusive fan pre-sale starting NOW!! Go to www.keshasparty.com and use password: FUKTHEWORLD

Despite Yeast Infection being a one-show wonder, Kesha will be doing something similar under the name Kesha And The Creepies. The singer took to her social media pages in mid-July to reveal a poster for the “Fuck The World Tour.” In the caption, she emphasizes her “deep eternal love of dirty rock ’n’ roll” and says she will be reimagining her old songs and favorite tracks from her idols in a string of dates at intimate venues for this “new creepy creation.”