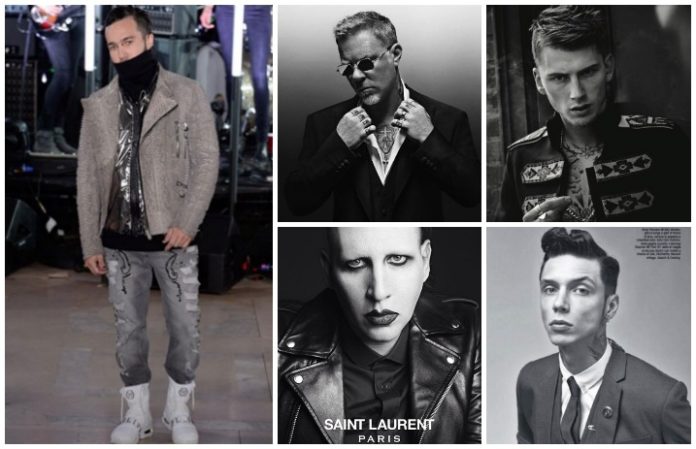 Most artists are used to posing for the camera to nail some sweet promo shots for their band. However, some are striking a pose outside of the scene, whether on the high fashion runway or a commercial ad campaign. Head below to see just a few musicians’ best model moments.

Fall Out Boy bassist Pete Wentz first ventured into fashion with his own clothing line, Clandestine Industries, and has starred in an ad campaign for its collaboration with DKNY Jeans as well as a feature for Gap. Most recently, however, Wentz hit the runway for Philipp Plein’s show at New York Fashion Week alongside viral mugshot owner Jeremy Meeks, model and daughter of Lionel Richie, Sophia Richie, and rappers Fetty Wap and Desiigner.

@luomovogue and I did a shoot inspired by Bowie a couple months ago and it hit stands today. i just wish the man himself could’ve seen how he influenced my generation. Photographer: Mark Segal Stylist: Robert Rabensteiner #luomovogue

@AdrianaLima and Tyson Ritter for Harper’s Bazaar US November 2013! pic.twitter.com/xp6gxGVfTo

As part of Ford Models, All-American Rejects frontman Tyson Ritter has quite a hefty portfolio. The vocalist has joined Adriana Lima on a Romeo And Juliet set for Harper’s Bazaar, shot for Hugo Boss and walked in a ’40s inspired show for John Bartlett during Olympus Fashion Week—just to name a few.

Metallica became the face of a couture Italian-based suit company Brioni last summer. The ad campaign featured group shots of the band as well as some solo ones of each member looking quite dapper.

As a signee of IMG Models, Andy Biersack appeared in a spread for last January’s issue of Vogue Italia complete with a vintage theme. The vocalist was featured via a glamour shot as well as posed with a fellow model.

Back in 2013, Paramore frontwoman Hayley Williams partnered up with MAC Cosmetics for a line in her signature orange hue, and of course the vocalist was featured in each product for an ad campaign flaunting the new looks.

30 Seconds To Mars frontman and Academy Award winner Jared Leto starred in a Gucci ad campaign for their perfume Guilty. The ad put Leto’s silent acting skills to the test for a romanticized setting full of fashionable moments and intrigue.