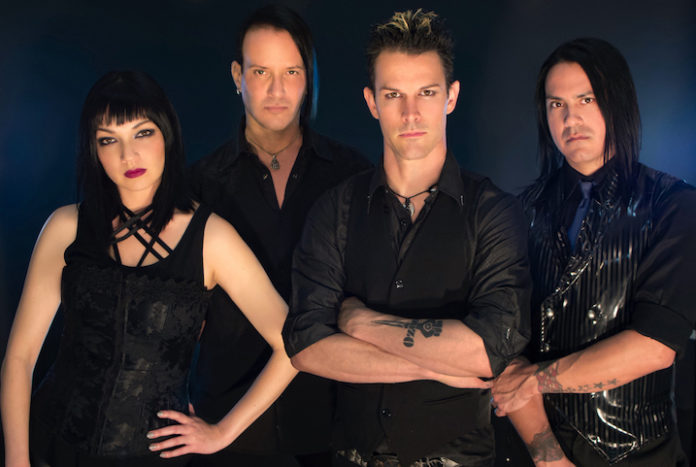 Electronic rockers 9Electric are releasing an emotional music video for their song “Beautiful,” which follows a woman who learns she has breast cancer and her struggle to deal with the diagnosis.

The video was directed by singer Ron Underwood and features Miki Black, a long-time friend of the band and now breast cancer survivor (she was a cancer patient during the shooting of the video). Both shared touching statements about the recording process, depression and the importance of coming together to help one another. “There was so much of this production that was therapy for us both, and I was blown away by the process,” Underwood says.

Black explains it took her a while to digest the story of the video, but she ended up feeling comfortable with starring in it, especially because their journeys ended in opposite ways. “Once I realized something other than myself wanted to take me down, the little fighter in me made the choice to conquer the beast,” she reveals.

“Beautiful” is on 9Electric's—Underwood, guitarist Mikey Lopez, drummer Micah Electric and bassist and violinist Ginny Eck—debut album, The Damaged Ones, released in 2016.

Watch the video and read the statements below:

Ron Underwood:
“Lyrically, 'Beautiful' is about someone 'too far gone to save.' As director, I was concerned that too literal a depiction of the song might come across as melodramatic or stale. When Mikey [Lopez, guitarist] shared the treatment with his friend Miki, who was in the process of fighting breast cancer herself, and she wanted to be in the video, I was a little relieved, but also scared that I may be in over my head.

“I felt a lot of pressure. This is a heavy topic and she was a real cancer patient with something real to say. With Miki joining the project, suddenly everything in the video become real.  Very real. Maybe too real? From the family photos to the diagnosis papers, to all the tears. The bald self-portrait was something she painted while going through chemotherapy. In fact, she wore a wig for the video because she still had no hair. I felt this genuine responsibility to her and all that she had to express. A few times I even stopped the shoot because I felt maybe I had pushed Miki too far, and she would always say, 'No, we have to keep going…' She reassured me that we were on the same page every time. She’s incredibly brave.

“Through my lens, I watched as she purged her frustration and so much sadness. I filmed her standing face-to-face with her fears, face-to-face with her own mortality… and in the darkest parts of the shoot, I was reminded of how far I'd come through my own battles with alcohol. There was so much of this production that was therapy for us both, and I was blown away by the process. We confided in each other a lot between takes and I made such an amazing friend. I'm so grateful she was a part of this.

“In the darkest parts of the shoot, I was reminded of how far I'd come through my own battles with alcohol.”

“This video isn't just about cancer. It's also about addiction, and it is about losing oneself. It goes to an extreme and treads through a lot of dark territory, but not just for the sake of being dark. It seems like every day we are faced with more tragedy in this world. Depression, cancer, addiction, suicide and even murder are just a small part of the battle we all face on a daily basis. We've all lost family, friends and heroes, nobody is left untouched, but we all pull through it together. We can gain so much insight when we hear others' stories as they battle through the darkness. For many of us, knowing that we are not alone is what helps us focus on the light.

“I hope this video prompts people going through these kinds of things to reach out to others. That’s the real purpose of art, music, or any kind of storytelling – to bring people together. When we come together, we are strong… and when we are strong, we survive.”

Miki Black:
“Prior to my diagnosis with breast cancer, I was living alone, single and running a business from home. I had become quite reclusive, only leaving the house to run errands and for an occasional night out. Every grocery store trip involved picking up a six-pack of beer, which eventually turned to a 12-pack. I used the excuse that I was being creative and productive, but the fact is I was extremely lonely and suffering from severe depression. At times, I was suicidal.

“Depression is no stranger to me, as I have dealt with this demon on-and-off since I was a child. Fast forward to receiving my diagnosis: I had already cut back drastically on the drinking because I actually knew I wasn’t well. I’d finally pushed my body to its limits. All the organic eating, which is one thing I maintained for well over a decade, could not negate all the partying and damage that was done. I still fight the thought that I got sick because I weakened my immune system to the point of allowing in disease. The doctors have told me not to think like that, but my gut tells me otherwise. I was transformed from long-haired, spunky Miki, to a bald, creature-like being crawling up the stairs to go to bed at night once the chemo kicked in.

“I have been a fan and friend of 9Electric for years, and Mikey [Lopez, guitarist], was actually my roommate throughout part of my battle with cancer. When he first approached me about the 'Beautiful' video, he just wanted to hear my thoughts about how 'real' the treatment read. I opened the email, began reading it and couldn’t even get halfway through. The content hit so close to home that I couldn’t face it. It actually took me a couple of days before I was finally able to digest everything, but I actually found myself feeling really comfortable about the video. Why? Because I realized that my journey ended the exact opposite as the girl in the video, but  it could have ended just like hers. Once I realized something other than myself wanted to take me down, the little fighter in me made the choice to conquer the beast.

“Shooting the video was cathartic, surreal, and highly emotional for me. I lived through many moments of both my recent and distant past. I didn’t have to act. On top of that, I was still fighting my battle, having just had a major surgery less than a month before we began shooting. The fact that it was shot in my home amongst all my belongings — with my dog, the diagnosis letter, the booze, pills, photos of my family and childhood — and having to act out dying in my own bed… It just doesn’t get more real than that. But being surrounded by the guys in 9Electric, my friends, as they helped me through, and knowing that I chose a different path, the right path, made it somehow all so beautiful.”

“Shooting the video was cathartic, surreal, and highly emotional for me.”

October is Breast Cancer Awareness Month and you can learn more about it here.