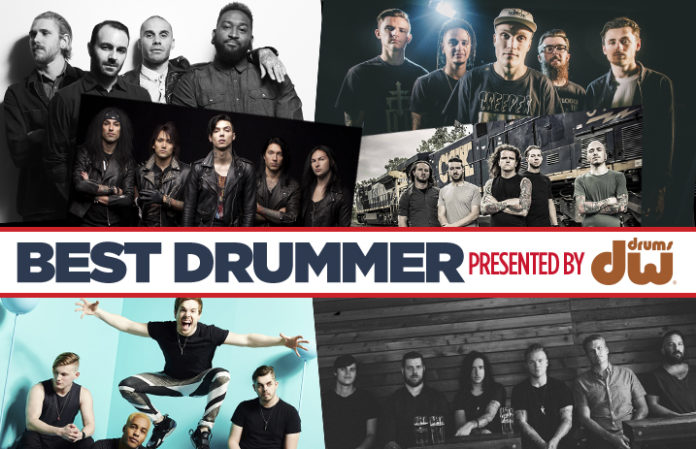 This year's APMAs bring a talented crop of musicians to the Best Drummer presented by DW Drums category, so we decided to take a closer look at the stick wielders who are up for the award. Head below for a breakdown of each drummer's background and style, as well as a track that highlights their talent. And don't forget to help your favorite musicians bring home a Skully by casting your vote here!

About the artist: Christian Coma has been playing drums since he was 9 years old. Previously in the band Silent Civilian, CC joined Black Veil Brides in 2010.

Style: BVB’s aesthetic already brings fans back to the glamour and glory of ’80s hair metal, but the drumming is really what makes it stand out. A huge kit means a lot of toys to play with and CC takes full advantage of them.

Check out: “In The End” The heart-pounding drums are the perfect touch to this arena rock anthem.

About the artist: Robinson started as August Burns Red’s drum tech before jumping on the throne for letlive. His debut will be on the band’s new album, If I’m The Devil.

Style: Robinson has a little of everything in his style. Hard-hitting hardcore to techy, fast punk and blastbeat drumming—then, out of nowhere the gospel chops shredding begins and knocks people off their feet.

Check out: “27 Club.” Although he didn’t play on this album, the live videos of Robinson playing the track are a great introduction to his dominating style with an added breakdown interlaced with flashy and jaw-dropping fills.

Jerod Boyd, Miss May I

About the artist: One of the original members of Miss May I, Boyd leads the charge for the genre with a few other stick-wielders in the metalcore world.

Style: Double-kick infused metalcore with stick theatrics and big fills. It’s all about concise, choppy and techy grooves that synch up perfectly with the stringed arsenal of his fellow headbangers on stage.

Check out: “Rise Of The Lion” for Boyd’s machinegun double kick and techy breakdown beats.

About the artist: Hailing from Wales, Washington studied at The Academy of Contemporary Music and was added to Neck Deep after vocalist Ben Barlow and former guitarist Lloyd Roberts started the band as a two-piece. He’s growing in notoriety among the other heavyweights in the pop-punk scene.

Style: Washington is a shot of adrenaline to the class of new pop-punk drummers, modernizing the sound while still keeping it reminiscent of the good ol’ days. Lightning fast beats one second and groovy and bouncy the next, Travis Barker and Tre Cool would be proud.

Check out: “Serpents” is a new and refreshing jam capturing the spirit of the genre’s forefathers.

About the artist: Danziger joined Set It Off in 2010 after playing in a ska band. He’s now traveling the planet and doing big things in the drumming world.

Style: To match the theatrical, larger-than-life nature of the band’s sound, Danziger brings a mix of drumming techniques to the fold. He focuses a lot on the toms and interesting cymbal work before the big choruses come in for the standard in-the-pocket wailing.

Check out: “Wolf In Sheep’s Clothing (feat. William Beckett)” for the orchestral stick clicks in the verses and the bouncy rock drumming for the rest of the tune.

About the artist: Gillespie began drumming at an early age. He most notably has played in the wildly successful Underoath, pulling double duty on the skins and handling the clean vocals. This was followed by a solo effort— where he pulled a Dave Grohl and fronted his project—the Almost and also operates as sticks-for-hire for Paramore.

Style: He’s one of the hardest hitting drummers out there with the finesse to back it up. It’s technical and classy style without ever overplaying.

Check out: “Breathing In A New Mentality” is the perfect way to open up Lost In The Sound Of Separation showcasing Gillespie’s powerful chops with everything from accented, lightning-fast snare fills to thrashy hardcore beats to gorilla-slamming velocity breakdowns.