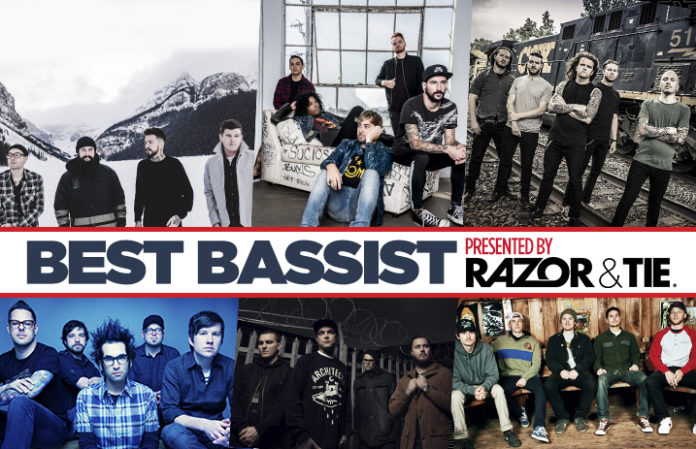 This year's APMAs (get your tickets now!) bring a talented crop of musicians to the Best Bassist category presented by Razor & Tie, so we decided to take a closer look at the artists who are up for the award. Head below for a breakdown of each bassist's background and style, as well as a track that highlights his talent. And don't forget to help your favorite musicians bring home a Skully by casting your vote here!

RALPH SICA, BEING AS AN OCEAN

About the artist: Sica was one of the founding members of Being As An Ocean in 2011, and before that he played in the band Vanguard.

Style: It’s all about holding it down and keeping things big and chunky before transitioning into technical, precise picking for breakdowns. Nothing too crazy but tasteful enough to make the heavy parts crushing and the softer moments dynamic.

Check out: “Death’s Great Black Wing Scrapes The Air” The distorted bass line through most of the song adds extra layers to an already heavy track.

About the artist: Acord attended Cornish College of the Arts in Seattle, where he studied jazz. He first joined the band in 2012 as a session musician, securing a full-time spot as their bassist the following year.

Style: Combining the slapping of funk bass while playing into the choppiness of metalcore. It’s apparent music school paid off. Acord adds flavor to a genre that's been known to have its own parameters for musicians.

Check out: “Hooligans” is a fun and groovy song that makes your head bob before you realize how wild the bass really is.

RYAN NEFF, MISS MAY I

About the artist: A heavy music connoisseur, Neff is one of the original members of Miss May I.

Style: Neff embraces the low end while focusing on right hand speed and ferocity. He understands where the bass lies in the mix and still melts faces.

Check out: “Forgive And Forget” The lightning-speed trem picking into techy breakdowns and crazy thrash moments gives me finger blisters just thinking about it.

About the artist: Taylor joined Motion City Soundtrack in 2002, before their debut album, I Am The Movie.

Check out: “Delirium” The strange descending bass lines in the intro and verses showcase Taylor’s always classy tone as well the ability to stick out in the right way, which is hard for bassists to do tastefully. Once the chorus kicks in it’s back to full band rock mode.

About the artist: One of the original members of this Australian metalcore outfit, String started as the lead singer and rhythm guitarist before eventually moving to bass duties in 2007.

Style: While taking the role as lead vocalist, Stringer keeps the dynamic between heavy and melodic without walking on his band members’ toes. The songs get exactly what they need and have room to breathe.

Check out: “Pittsburgh” The song is a banger and the bass is simple in all of the right places. Instead of being technical or overwhelming, it is the perfect accompaniment.

KELEN CAPENER, THE STORY SO FAR

About the artist: Capener was one of the founding members of TSSF in 2007, back when they were still playing in small clubs instead of selling out venues all around the world.

Style: Matching the interesting drum beats, the bass playing is syncopated and mechanical or groovy when it needs to be. It has a nice twist of pop-punk and hardcore influences.

Check out: “How You Are” The standalone bass lines and chords in the intro have a nice modern twist on the classic pop-punk bassists Mark Hoppus (Blink-182) and Dan Andriano (Alkaline Trio) that leads into dynamic playing with feel.