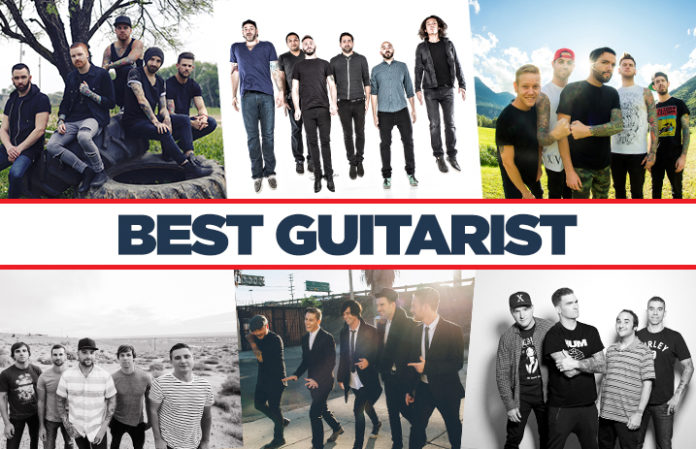 The 2016 APMAs are only a few short weeks away, and voting closes on July 1! Just to make sure you've done your research before you cast your vote, we're helping you out and briefing you on all the nominees for Best Guitarist. Check out all your options, and then make sure to VOTE right here!

KEVIN SKAFF, A DAY TO REMEMBER

About the artist: Skaff joined ADTR in 2009, six years after they formed, and has helped the pop- punk/metalcore fusion quintet grow into the juggernaut they are now.
Style: Skaff easily moves from catchy chords and pop-punk riffs to massive breakdowns at the blink of an eye.
Check out: “Right Back At It Again,” the perfect blend of melodic head-bobbing to crushing headbanging guitar.

About the artist: Brubaker is one of the original members and lead guitarist of metalcore behemoths, August Burns Red.
Style: A healthy and heavy mix of mathrockin’ Euro and death-metal riffs, squealing and chuggy breakdowns all peppered with catchy, melodic leads.
Check out: “Identity,” where the droney and melodic lead guitar cuts through the heaviness, then into a surfy bridge to throw a wrench in the gears.

About the artist: After starting out on drums, McGregor made the switch to guitar and founded Memphis May Fire in 2006. He also handles the backing vocals and programming for the band’s sonic landscape.
Style: Similar to other bands in the genre, the guitar work is more for setting up a good song rather than showing off.
Check out: “Stay The Course,” a solid portrayal of McGregor’s playing from techy single-note low-end to melodic, uplifting choruses.

About the artist: New Found Glory spearheaded the pop-punk revival and have flown the genre’s banner with pride as they’ve evolved and explored its sonic parameters over the years.
Style: Adding the hardcore influence (especially the concept of the breakdown) to melodic and upbeat music set NFG apart from the pack. Gilbert’s guitar playing was the perfect compliment to Jordan Pundik’s vocals throughout their storied discography..
Check out: “Selfless,” he first track from Resurrection—the first album with Gilbert as the sole guitarist for the band—proves how one guitar can still sound massive and leave room for some really cool riffs.

About the artist: One of the founders of the djent movement, Periphery have been pushing the barriers of metal while appealing to a large demographic of heavy music fans since 2005. Mansoor is a producer as well as playing in various other projects like Bulb, Snuggles, Four Seconds Ago and Of Man, Not Of Machine.
Style: Trained, technical and proficient. The common bond here is the level of expertise involved with the incredibly detuned heaviness and the bizarre over-your-head guitar wizardry.
Check out: “MK Ultra,” the perfect example of Mansoor’s style. You’ll groove to it before tilting your head and squinting as you try to understand what’s happening without being distracted from the song itself.

About the artist: Jack joined SWS in 2010 and has been pulling guitar duties ever since.
Style: A mix of the new breed of post-hardcore bands and moments of pop-punk sensibility, the band and his guitar work continue to evolve into their own style of rock ’n’ roll.
Check out: “If You Can’t Hang,” where the upbeat, driving anthem has a nice blend of melodic leads and a wall of heavy guitars.