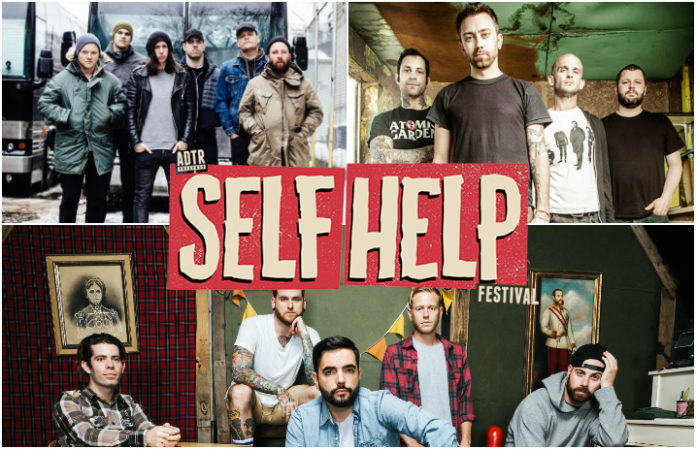 The country is in an uproar over recent racist demonstrations we thought were just blasphemies of history. The presidential administration makes its latest PR blunder in handling extremely delicate and inflammatory issues with a total lack of sense and compassion. This is an era of extreme division, instability, anger and sadness. But while the world seems to knock itself even more off its axis with each passing day, musicians and artists like A Day To Remember and vocalist/Self Help Fest founder Jeremy McKinnon try desperately to create safe havens and community.

WATCH: Hanging out with A Day To Remember at Self Help festival

This year, Self Help will hit the cities of Philadelphia; Orlando, Florida; Detroit and San Bernardino, California. The annual event is still somewhat in its infancy, having been established in 2014, but is quickly becoming a landmark event in the rock scene. “I just think it’s an escape from everything that’s going on in the world,” McKinnon says of the festival. “That’s what music is to me, at least. [Self Help is] just a place where you can go and enjoy music that talks about real world problems that actually affect you. It’s a community. Getting all of these genres that kind of all fall under the same fanbase together — we’re just trying to build a community for this genre.”

“[Self Help is] just a place where you can go and enjoy music that talks about real world problems that actually affect you.”

At the same time that both prominent and up-and-coming bands of the hardcore/metalcore genres confront the challenges of today’s world with their lyrics, their music creates a sphere of positivity by bringing people together. These same bands (Underoath, Rise Against and more) are the ones who appear on the Self Help lineup in an effort to recover the impact of rock music. “We could really see some growth for some these bands, and we really need that in the rock world right now,” McKinnon surmises. “If records aren’t gonna sell, if rock music isn’t the biggest music in the States anymore, then now more than ever we need to have something where we’re trying to build ourselves.”

Communication and human connectivity are certainly important aspects of Self Help Fest, but it’s not all the event offers. Serious times are upon us and serious subjects make their way into modern heavy music, but Self Help is largely concerned with fun. “We build it around exactly what we want as [fans],” McKinnon says. “We always have a hand-picked dream list [for the lineup]. Honestly, that’s all it is. A few of us get together and put together the lineup that we think would be the coolest lineup of the year — people that we want to see.” Those bands include huge acts like Underoath and Silverstein, who have personally impacted ADTR since before they even were ADTR. “Those are the bands we grew up listening to, the bands that inspired us. We’re always trying to bring in the stuff that inspired us [and] the things that we think are actually quality music from all of those past years that matter to us. We try to bring a super package.”

While the festival is all about the rock scene, it doesn’t limit its scope to purely hardcore or metalcore artists. Punk, ska, alternative rock, pop punk and even rap are making their way onto the list. “We try to do it in different genres, too. We have Less Than Jake playing in Orlando. That’s punk and ska from the early 2000s/mid-‘90s. So we’re looking at it like, who does the Less Than Jake fan also like? And who do we also like? And that would be Streetlight Manifesto. So we’re trying groups of bands that matter for that style of listener. We’re [also] talking about looking into rappers that actually draw a hardcore fanbase — I don’t mean a crazy fanbase, I mean actual people who are into hardcore music. I’m seeing more and more of that these days.” Traditionalists might argue that branching out into those genres conflicts with the intention of building up the rock scene, but that’s not how McKinnon sees it. To him, this move is one that will hopefully further unite a variety of fans under the same umbrella.

Another thing onlookers might notice about Self Help is that each date’s lineup is not extensive by any means. “What I think is cool about our festival and what makes it different is the lineup is a little bit more concise than other festivals like ours. You can pretty much see every band on the bill.” McKinnon looks to European rock festivals after which to model his own to ensure that each band gets the attention they are owed. “They have the resources to put back and take care of the artist. That’s huge for us as well. We just want everybody to feel special… Everyone plays to this massive, massive crowd. I have seen bands have the sets of their career on these Self Help stages.”

“We just want everybody to feel special.”

There is already a lot to look forward to for Self Help 2017 as it draws near, but it seems as if future festival runs hold much more for both fans and artists. For McKinnon, all of these efforts boil down to one simple truth: “Rock isn’t the biggest scene in the world, so why wouldn’t we just get together and all try to promote ourselves? Why play against each other when we could all come together and do something special?”

Self Help Festival takes place Sept. 10 in Philadelphia, Sept. 30 in Orlando and Oct. 7 in Detroit. Tickets are still available on Self Help's website.