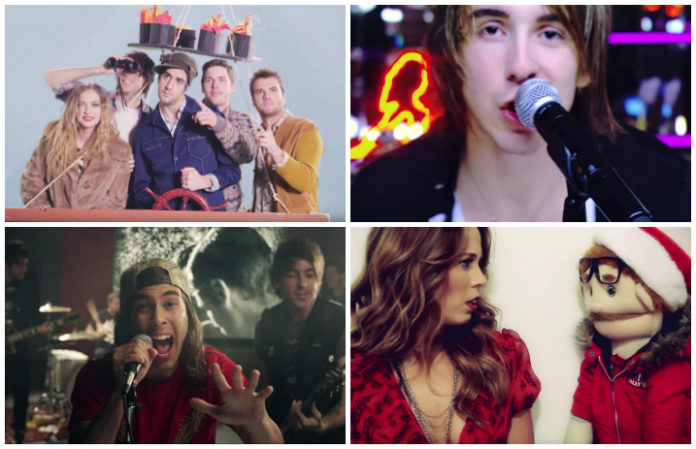 In honor of All Time Low announcing their seventh full-length, Last Young Renegade, as well as releasing the spooky music video for “Dirty Laundry,” we thought we’d take a look back at their wacky video history and rank what we consider to be the best of the bunch.

Since this is an animated vid, we decided it wouldn’t be fair to rank it alongside its live-action counterparts. That being said, this cartoonified video is kickass! Animator Brett Jubinville, creative director of Tinman Creative Studios in Toronto, also contributed all of the artwork for Don’t Panic. You can see more of his work here!

This video brings new meaning to “vintage All Time Low.” From the ill-fitting formalwear to the uncomfortable looks on the extras’ faces, this video is the perfect dose of nostalgia to start our official list.

One thing’s for sure: It takes a lot of balls to make an original anti-Christmas song around the holiday season. Nonetheless, the band does it in an entertaining and festive fashion with the help of Stuart the puppet.

Regardless of this video’s current ranking, it’s definitely No. 1 for “videos we wish we could participate in.” For their second single off Future Hearts, All Time Low opted for a more performance-based video—except they tricked it out with a ton of fans having a blast with glow-in-the-dark paint.

Buff dudes with guns, a high-adrenaline rooftop chase, an Iron Man-esque electromagnet heart graft…this video is an action flick in the making. Plus, this video has some of the best performance shots of the guys—hel-lo rooftop lighting!

To match the Peter Pan-inspired lyrics, this video follows the band as they escape to the mystical Neverland. You get plenty of whimsy with some top-notch claymation and weird upside-down shots.

For the final single off of their latest album, Future Hearts, the band headed to England to give back to their fans. As Alex plays acoustically on the street across from Big Ben and Palace of Westminster, the boys Skype some of their fans around the world with a heartfelt hello. It may have been a nearly effortless concept, but it’s certainly enough to have us say “awww” at our computer screens!

This second single from Don’t Panic seems to focus on the unknown story behind arcade mascots—that is, until the final twist. You might hate your job, but hopefully it isn’t this painful.

Admit it: You expected us to forget about “Circles” and squealed when you saw it on this list, didn’t you? Back when they were still signed to Emerald Moon Records, the then shaggy-haired members of All Time Low released their very first album titled The Party Scene in the summer of 2005. Through wide-legged jeans and numerous guitar swings (seriously, a lot), All Time Low build a pop-punk Fountain of Youth.

The first of many ridiculous So Wrong, It’s Right era videos on this list, “Six Feet” features members of the band in crazy outfits singing their hearts out on karaoke. But who will be the ultimate grand champion?