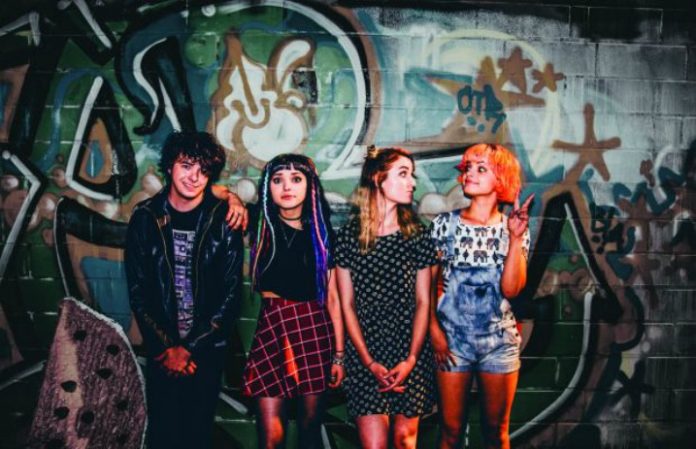 As if playing sold-out arena shows with pop-punk phenomenon 5 Seconds Of Summer wasn’t enough for pop rockers Hey Violet, the band felt a pre-show hangout was something absolutely needed. They call it the “Acoustic Hangout,” and it all started at a date in Spain during the European “Rock Out With Your Socks Out” tour this past summer with 5SOS.

“We were doing (the acoustic hangout) every single day on tour pretty much at every date,” says lead vocalist/bassist Rena Lovelis. “We got about 200 kids there the first time and we were blown away. Kids were there just to enjoy music and that’s something really cool to see.”

Here’s how it all works: There isn’t any planning to it, whatsoever. There isn’t any schedule or set time. The band members will either send out a tweet or Facebook post asking fans where the best place might be for the acoustic hangout to take place or just flat out tell people where the show will be hosted. It could be in a park or outside a building—anywhere. Each acoustic hangout happens in whatever city they are playing that night and is announced the day of the show. And it’s free.

“We would usually do it right near the venue if possible and we would be like, ‘Hey, meet us like between these two trees,’ [Laughs.] and we would see a gathering of kids there,” she says. “We’ll play a couple of songs and take pictures with all of them and get to meet them and it’s really cool.”

After seeing how many people started coming to the acoustic hangouts during the European leg of the tour, Hey Violet decided to continue the intimate acoustic shows at American tour dates. Because the shows were a spur-of-the-moment type of deal during the summer, Lovelis said the weather was a factor in choosing a location.

“Whatever has the most shade because it actually got really hot toward the end of the tour on our American leg,” Lovelis says. “So we were like, ‘Let’s just do it underneath trees with some water. And we were yelling at the kids to stay hydrated [Laughs.] It just depends on the venue and how it’s laid out.”

Getting the chance to interact with their fans in such an intimate setting allowed people to see and understand the band on a different level, Lovelis says.

“It’s one of the most important things and is such a priority for us to meet the fans and to really get to know who is listening to our music and why they’re listening to our music,” Lovelis said. “You could play a song to 2,000 kids and [there] could be for 2,000 different reasons why they’re relating to the song. They all come together and they give us art and poetry and letters. It’s cool to see, they kind of get to know who we are as a band since we’re just starting out, and I think it’s a really cool thing to see because we love meeting them.”