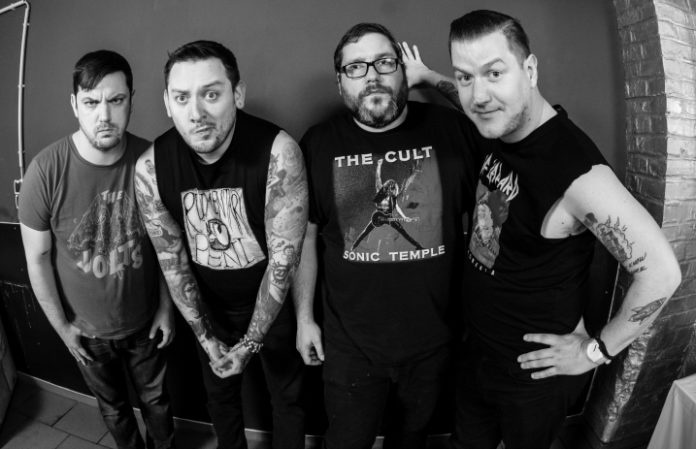 Ray Carlisle, co-frontman and guitarist of Teenage Bottlerocket, says what he misses most about his late twin brother Brandon is simple.

“…The shittiest thing wasn’t him not being on the new record, it was me not being able to show it to him…let him hear it. This is something everybody in Teenage Bottlerocket will be dealing with for the rest of their lives.”

He pauses, clearing his throat.

“He was my best friend,” he continues. “We grew up in the same bedroom until we were 18 years old. So, I just miss those late-night talks, those cool conversations, and I miss the fights. I just miss talking to him. With this new recording, the shittiest thing wasn’t him not being on the new record, it was me not being able to show it to him…let him hear it. This is something everybody in Teenage Bottlerocket will be dealing with for the rest of their lives.”

The new record Carlisle is referring to is Stealing Covers, recorded at the Blasting Room in Fort Collins, Colorado. Coming out this July, this will be their seventh full-length and their first album without Brandon Carlisle behind the drum kit.

“All the bands we covered are like, friends’ bands,” he says about the album that plays tribute to groups like Seattle’s HEAD and Austria’s the Mugwumps. “They’re small-time bands—they’re bands that you’ve probably never heard of. They’re songs we’ve played in the van and we fell in love with over the years. It’s something we talked about doing, [even] before Brandon passed away. It’s cool to be back in the studio and get to do this project, this concept album. Darren [Chewka] did an amazing job on the drums.”

From his Laramie, Wyoming, home, Carlisle is playing video games and making lunch with his 10-year-old son, Milo (named after Descendents frontman Milo Aukerman). In some ways, fatherhood has changed the youthful Carlisle and in some ways it hasn’t at all.

“We go snowboarding and it’s fun, but when he screws up, I have to be a dad,” he says bemusedly. “I hate it, but I raise my voice and say, ‘Go brush your teeth.’” Does it make me grown-up? Not really, but I have to do it. Or when Milo’s on Warped Tour with us, I can’t just heat myself a frozen burrito and go cruise around—I have to make my kid his bowl of Frosted Flakes and makes sure he cleans up.”

“I really think my kid is just a good dude,” he says seriously. “I lucked out. Some kids are just born shitheads, dude. I’m blessed Milo is not a shithead.”

On top of his son’s positive energy and lack of shitheadedness, he says writing songs has helped push him through adversity and the hard days and nights.

“I can’t listen to old recordings,” he says. “But looking forward and writing new songs, that’s the mentality that has gotten me through recent times. It’s cool. There’s a time for radness and there’s a time for sadness. I just try to stay positive and hang in there, man.”

Only yesterday, Carlisle was packing up some of Brandon’s possessions that he had around the house.

“I found some toys he had, and some books and his motorcycle,” he says. “I have all of his studio gear too. That was tough looking through all that.”

But throughout the darkness, Teenage Bottlerocket continues to be one of the most positive, high-energy live bands out there—a jubilant show.

“It’s fun for us to kick ass up there,” Carlisle says. “We just want this energy behind the music, that we’re feeling onstage, to be transmitted to the audience. Most importantly, it’s a party for everyone.”

Last year, Carlisle released a well-received solo record under the name Ray Rocket (it features Brandon’s last recording on drums) and he thinks he’ll do another one—it’s just not on the radar right now.

“I just want to focus on the next Teenage Bottlerocket record right now, which is totally funny to say out loud because we just got out of the studio two weeks ago,” he says. “Everyone—Kody [Templeman, guitar], Miguel [Chen, bass], myself—have been writing. Will I do another Ray Rocket record? Yeah, I think I will, but it’s totally on the backburner right now.

“It’s a different vibe, being up there playing by myself,” he continues. “I mean, it was fun but I missed the powerhouse…I missed the rock band and missed playing the music my mom hates,” he adds, laughing. “But having said that, I’m glad I did it, and I’m proud of that Ray Rocket record. Brandon got to hear it before he passed and he was stoked on it, and that makes me really happy.”