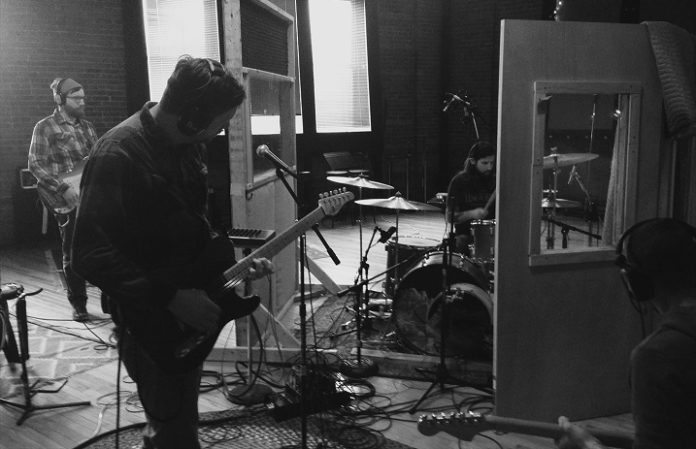 Beard rock heroes Able Baker Fox are back in action, the band formed in 2006 by members of the Casket Lottery (Nathan Ellis) and Small Brown Bike (Mike and Ben Reed, Jeff Gensterblum). Before they release a new album and hit (some of) the road later this month, we're premiering a new song and catching up with Ellis below. Another track, “Drift,” is now streaming on Spotify.

“This song was born in a haunted attic of home built during the early 1800's on a farm at the outskirts of Marshall, MI. It's not about that at all, but I think it's interesting,” says Ellis of “Painted Shell.”

Last seen reuniting for the Fest in 2014, the band have since readied a follow-up to their debut album, 2008's Voices. The long-awaited sophomore record was recorded by J. Robbins, is called Visions, and will be released on August 25, 2017.

This record comes nine years after your debut. What took so long?!

We have been talking about it for quite awhile and really the only hurdle was finding the time that all of us could commit to making it happen. We all still live in separate states and have families and day jobs, so it is a challenge, but we all really just wanted to do it again.

What's the most challenging part of getting Visions into people's ears?

My hope is that everyone at least knows it exists. There is just so much music coming out at any given time now that it's hard not to get lost in it all. And, I'm just as guilty of being that guy that starts a record and giving it a minute and a half and deciding if I want to give it a full spin or not, but I hope that people put it on, turn it up and let it play through its duration. And then start it again.

Do you have a fire to play these new songs live?

Yes! Of course! We have about half a dozen shows booked starting late summer and early fall, but hope to have the opportunity to get out do more on this record than we ever have in the past.

Clearly J. Robbins “gets it” when it comes to the midwestern punk/post-hardcore sound. But beyond that, what was the recording time like having everyone in the same room again?

Recording with J. was awesome. It was my first time working with him, but Jeff has recorded with him many times and Mike and Ben did the most recent SBB record with him. Able Baker Fox has made two records now where we have written the songs by file sharing ideas, practicing once over a weekend and tracking 11 songs in four days. So, we don't allow ourselves a whole lot of time for error or experimentation. We just go in and bang out the songs as a four-piece rock band and whatever we get, we get. It can be a little intimidating at the start, but by day four we all felt really good about where we were at in the process and I love how the recording turned out.

Some bands would put out something wildly different after nine years, but Visions is an easy sell to any fan. Do you value consistency when you write?

I think the way we write is just natural. As I mentioned earlier, the process is very raw. We each bring our own ideas to the table and then somehow we cram them all together and make a record. I think if we ever thought too hard about how we wanted an ABF record to be it would lose its appeal, at least to the members of the band. We love that it is as effortless as it is. And it's only effortless in that it feels so good to write and play with each other. The scheduling part is a real bitch.

While we have you, can you give us any news on the Casket Lottery and Small Brown Bike?

I don't believe SBB is working on anything right now, but TCL is about to do some represses of our first three LPs and are talking about how to get out and play some shows in support of that. We'll see. Hopefully that works out.