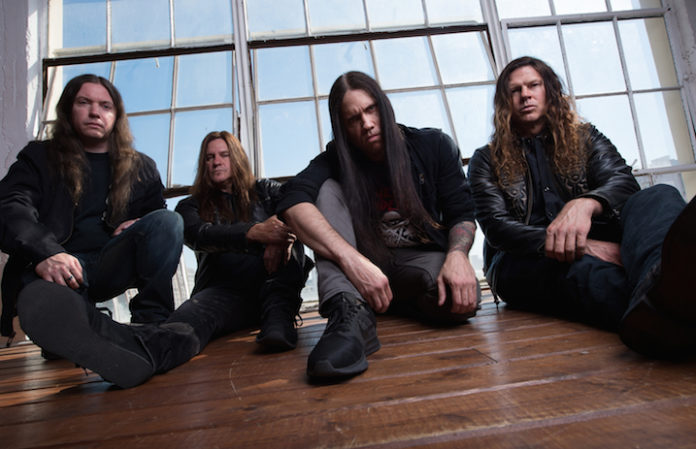 Metal supergroup Act Of Defiance are back with their second album Old Scars, New Wounds, out this week on Metal Blade Records. Fans of the band’s 2015 debut, Birth And The Burial—as well as AOD guitarist Chris Broderick and drummer Shawn Drover’s previous stints in Megadeth—will be blown away by the record’s instrumental dexterity and topical urgency: their new 11-song blitzkrieg is a metal exposé of logging on, buying in and selling out.

“Our musical direction, life experiences and core values determine the path we take with AOD,” Broderick tells AP.  Act Of Defiance’s lineup also includes vocalist Henry Derek (ex-Scar The Martyr) and Shadows Fall’s Matt Bachand on bass, an amalgam of metal veterans coming together to serve a decisive, conscientious vision. “Our experience and musical direction comes from all of our past experiences.”

On Old Scars, New Wounds, songs such as first single “M.I.A.” (“Mis-Information Age”) and “Broken Dialect” tackle the tech-savvy times, the perpetuation of “fake news” in the media and our increasing reliance on glowing screens as self-serving contrivances. “We can no longer blindly trust the source of facts that determine our view,” Broderick says about “M.I.A.,” while “Broken Dialect” conveys the idea that “people can no longer hold a conversation with each other where their views differ, instead turning to sources that only support the view they want to hold on to.”

“We can no longer blindly trust the source of facts that determine our view.”

“I don’t think there are any technologies that are a detriment to our society,” Broderick clarifies. “It’s how and why we use them that are the potential problems. As for the internet, in my mind, it is one of the best technologies in terms of getting information to people that otherwise wouldn’t be able to access it. At the same time, people use it as a propaganda machine with no accountability to the truth, so the question should always be what is the source of your information and what is [its] credibility.”

The second track previewed from Old Scars, New Wounds, “Overexposure,” is about “not selling out and maintaining convictions about your art,” relays Broderick. The metal anthem against betraying one’s principles is crucial to Broderick and Drover, who left Megadeth together in 2014 to follow their own muse. While Act Of Defiance use their previous band experience to augment their synergistic approach, Broderick asserts that the band will stay true to its roots while admitting the gray area involved in the act of “selling out.”

“Act Of Defiance would never conceive a song around the idea of its popularity.”

“I believe the line is very blurred,” he says. “For me, selling out would be compromising one’s art in the hopes of monetary gain or fame. For Act Of Defiance, we would never conceive or try to engineer a song around the idea of its popularity. That doesn’t mean that I wouldn’t ask my friends or other trusted musicians what they thought of a chorus or another aspect of a song, but we would never worry about chasing something that is counter to our art.”

AOD’s new music combines all of these on-point  touchstones with visceral, relatable conviction, imbuing such lofty admonishments with a personal air of connection. After all, the album’s pointed title, Old Scars, New Wounds, speaks to one’s private flaws as well as the wide-ranging challenges facing humanity.

“I have always liked titles that can be all of these things—figurative or literal, personal or universal,” says Broderick. “When I think of it figuratively, I think about life in general and how it can always be a struggle, but you keep going. I can also apply my personal struggles as much as I can look at humanity’s struggles to infer meaning from Old Scars, New Wounds. Overall, I just thought the title is very appropriate for where Act Of Defiance is at.”

Old Scars, New Wounds is out this Friday, Sept. 29. Pre-order the album here.