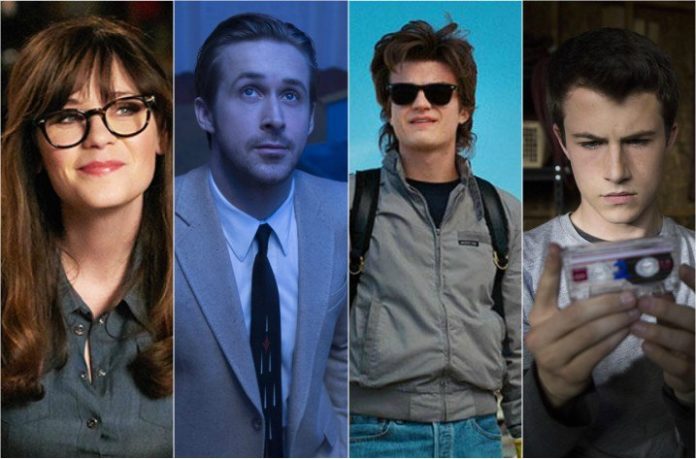 From Stranger Things to 13 Reasons Why, our favorite actors and actresses have stolen our hearts on television and the big screen. However, a handful of our fave celebs have given us even more of a reason to love them, thanks to their spectacular musical side projects.

Ranging from indie to noise rock, here are 15 celebs you might just want to add to your playlist, stat.

When he’s not fighting off Demodogs with Steve, Dustin—aka Gaten Matarazzo—sings in the New Jersey six-piece act Work In Progress. The band recently did some Fall Out Boy, Paramore and Foo Fighters covers, and needless to say, they were seriously epic and Hayley Williams approved.

Read more: Stranger Things’ Gaten Matarazzo is in a band

You might recognize Dylan Minnette as Clay from 13 Reasons Why, but he’s also the singer/guitarist for alt-rock band Wallows. The band recently released their fourth single, “Pulling Leaves Off Trees.”

That’s right: Ryan Gosling was part of the rock duo Dead Man’s Bones, which released their first, self-titled album in Oct. 2009. He and the other half of the pair, Zach Shields, played all the instruments on the record—even ones they had never touched before. Pretty amazing, right?

Professional snowboarder Shaun White was a guitarist in the electronic rock band Bad Things, which released their self-titled debut album in 2014. The band even graced the Lollapalooza stage in 2013.

It’s no secret that Zooey Deschanel has a glorious singing voice. (We all remember that scene from Elf, right?) Well, she’s also a part of the duo She & Him, who released their first album, Volume One, back in 2008. She’s credited for lead vocals, tambourine, piano and ukulele, and their tunes are an indie affair we can’t help but love.

Before releasing a Blink-182 cover with Neck Deep’s Fil Thorpe and writing music with All Time Low’s Jack Barakat, Tyler Posey was in his own pop-punk band: Lost in Kostko. Sadly, the band broke up in 2013, but there are still some live clips living on YouTube to relive some of those epic moments.

Finn Wolfhard (aka Stranger Things‘ Mike Wheeler) fronts a band, Calpurnia, and the indie outfit are recording their debut EP with Twin Peaks singer Cadien Lake James. You can hear the Stranger Things actor’s vocal skills in the band’s cover of Twin Peaks’ “Wanted You.”

Read more: ‘Game Of Thrones’ actor Peter Dinklage was in a punk band (and there are photos to prove it)

Peter Dinklage from #GameOfThrones was a punk-rock singer back in the ’90s https://t.co/5MkpFUpPE6 pic.twitter.com/vQBp1tlcU9

You probably best know actor Peter Dinklage as Tyrion Lannister on Game Of Thrones, but he also fronted punk-rock band Whizzy back in the ’90s. Though there isn’t any footage to dig up, there is this photo that is just as cool.