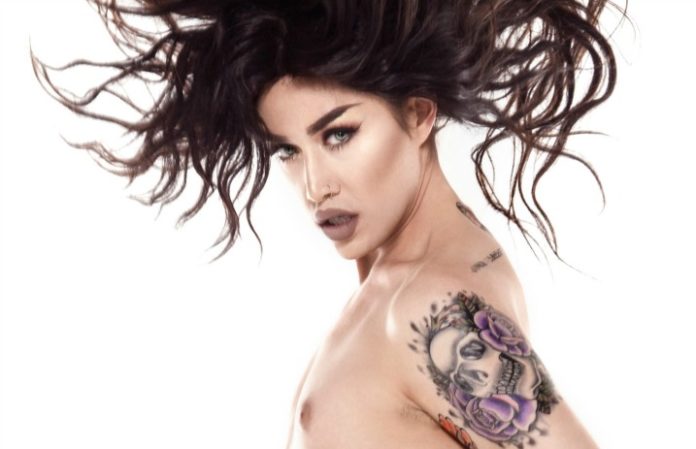 Drag queen Adore Delano just released her badass new album, Whatever. It’s a punk rock roller coaster ride from start to finish—and just so happens to be her second coming out.

You might remember Danny Noriega as the semi-finalist on season 7 of American Idol, and then Adore Delano’s introduction to the world as a top-3 finalist on season 6 of RuPaul’s Drag Race. Plus, she’s a social media maven, becoming the first drag queen to reach 1 million followers on Instagram.

Following her finalist ranking on two television shows, Delano released her debut dance album, Till Death Do Us Party, back in 2014, with her follow-up After Party making its debut in 2016.

Now, a year later, Delano is back with a guitar-drenched album that bites hard, which only makes sense—it’s what Delano is all about.

Taking cues from the likes of Marilyn Manson, Nirvana and Courtney Love, Delano’s newest offering, Whatever, is an edgy, energetic blast of rock n’ roll that oozes ‘90s punk-influences. Not to mention, it’s exactly what Delano wanted her record to be.

“It was a total 180 from the last two,” Delano explains. “I teamed up with my producer Nathan Marrow, and we just jammed out and the writing just wouldn't stop. I had a co-writer help me in the past, but I wanted to do this all solo.”

Her debut was an impressive feat. It was a Billboard charting Dance/Electronic album, and she was on the path for dance music superstardom. Yet Whatever marks her decision to live authentically on her own terms—that being one of America’s favorite androgynous recording artists—and make a record that exudes just that.

“My second record, After Party, was supposed to be the kick starter for the new sound. Shit happens,” Delano explains. “I just wanted to make music I like performing. I'm a crazy bitch on stage.”

And these songs are meant for the stage. It’s undeniable that through her evolution as an artist, Delano has created tunes that are impossible not to sing your heart out to. But with her latest offering, the power of her lyrics and punch-like potency of her vocals—as tracks like “Negative Nancy” prove—is well suited for the screaming guitars that’ll be joining her on tour this fall.

“Performing in front of crowds that sing your songs back to you,” Delano says. “There will never be another feeling to come and match that. Proud would be an understatement, but I still feel like I'm barely coming up. It's a lot of work, man.”

Whatever is all about living authentically, not letting others tell you who to be and being the most honest version of yourself. With its release, it’s clear that Delano’s been able to do just that.

“Now is the time to look back at who we used to be and see the good in it. Express it and bring it back to life.”

You can pick up Whatever here and catch her on tour this fall. Check out her full list of tour dates below, and get your tickets here.

What are your thoughts on Adore Delano’s new album? Let us know in the comments below!