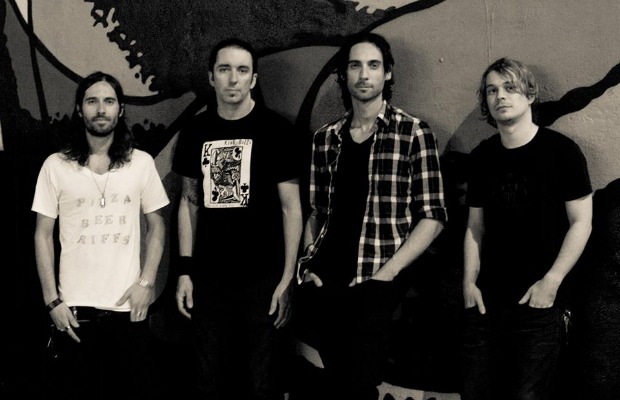 Los Angeles, California's ÆGES  are teaming up with AP to bring you the premiere of their second full-length album, Above & Down Below. The album follows the band’s 2012 effort, The Bridge, and will be officially released on September 23 via the Mylene Sheath. (Pre-orders are on sale now.) The record was mixed and mastered by Matt Hyde (Deftones, Slayer, Children of Bodom). Stream it in full below, and let us know your thoughts.

“Above & Down Below definitely means a lot to the band,” says vocalist/guitarist Kemble Walters. “Although it's our second full-length, it's the first with the addition of drummer Mike Land and guitarist/vocalist Cory Clark. With the addition of these two members, the band has been able to expand and more clearly focus on what ÆGES truly is. There's bigger hooks, thicker riffs, and pulsating rhythms. We've found our perfect match to become ‘aggressively catchy.’”

Kemble adds, “The themes of the record are rather dark, focusing on the more animalistic nature of the human race and how we see religion, friendship and trust. We're extremely proud of the lyrical content on the album. Each song has a definitive meaning to each of us but is written in a way that allows the listener to interpret it to best suit their current situation.”

The band are having the record release party at Lucky Strike in Hollywood on September 21. They will also have an October residency at the Silverlake Lounge.