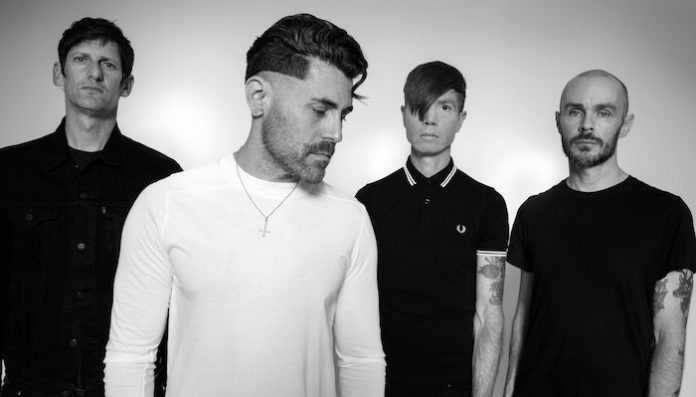 Today, Craft Recordings is issuing a limited-edition repressing of AFI’s 1999 EP, All Hallows. A longtime fan favorite, the tracks—three AFI compositions and a cover of the Misfits’ venerable “Halloween”—still supply the same adrenaline rush that they did on their original release date.

“I agree,” guitarist Jade Puget says in hindsight about the release. “We still play some of these. We play ‘The Boy Who Destroyed The World’ and ‘Totalimmortal’ every now and again. And it really doesn’t feel like we’re playing something that’s embarrassing or a token thing for the fans. I still have a lot of fun playing these songs. I’m obviously biased because I wrote the music for all these songs. But I don’t think there’s really a weak song on the EP.”

“We recorded it not too long after we recorded Black Sails In The Sunset,” bassist Hunter Burgan remembers. “And so we were just in and out really quickly.”

In what we’re calling the “hindsight track by track,” Puget and Burgan shared their feelings and memories about the EP with AltPress. Such as the one about how the record almost didn’t happen in the first place. 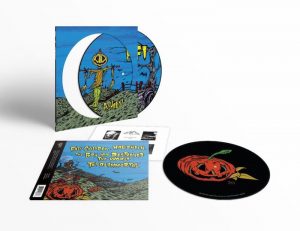 JADE PUGET: I believe we actually wrote this for the EP as it obviously has a fall, Halloweenish theme. To me, this is a quintessential AFI song from that era. Everything about it is just everything we’re doing from that era. You know, the big anthemic chorus, the whoas, the half-time breakdown. For AFI fans, we’ve got everything you want in the song from the ’90s. I feel like a lot of those whoas came from Rancid’s first record. I think that was the band that did the anthemic whoa thing in the chorus.

All Hallows is a record that fans are totally happy with. Do you feel the same way? Do you have cringe moments or parts and sections that you’d like to redo?

PUGET: Not really. I mean, certainly things would be played tighter. But that really wasn’t what it was about. It wasn’t about playing things perfect. I had a dual rectifier amp, and instead of getting a great clean tone, it would just be one amp one and one guitar for everything. But that’s minutiae. In retrospect, that tone defined my songwriting and playing of that era.

HUNTER BURGAN: I thought it was great. It’s been one of those things where for three years, people were yelling that song, requesting that song from the crowd—no matter what time of year it was. And I started to get this feeling—I think we all did—that we’re not a Misfits cover band. But people love it. I’ve had a lot of people tell me that they like it better than the original version—which I hope isn’t true.

PUGET: In retrospect, that was an obvious choice. And, you know, with me coming into the band, I really like the Misfits, but I wasn’t the super-crazy Misfits fan. But those guys had already done multiple Misfits covers, so it just seemed like the right thing. And to me now, that’s our best recorded cover. We haven’t done many recorded covers of songs, but that one is, I think, our best.

Who’s banging on the guts of the piano at the end?

PUGET: All of us. We just gathered around this piano that was in the studio just messing around. Just banging different things on the strings. It was a really fun session.

Whose ideas were the segues between songs? The piano rumbles, the rain, and the creepy music box all give the record some further continuity.

PUGET: Those were my ideas. Adam [Carson, drums] actually happened to have a music box at home, and it was really broken down, kind of [a] half-working one and brought the appropriately creepy, creaky sound.

3. “The Boy Who Destroyed The World”

PUGET: I’m proud of the writing on that when I really wrote some weird, really weird chordal stuff and just some strange playing, some strange positions on the neck. I feel like that was where my guitar playing and my songwriting was starting to take a little bit of a step forward.

BURGAN: At the end of that track, we have the sound of thunder and rain. When we would play that live, we would have a sample triggered by a pad, and I would go over and hit the pad with my bass right at the end of the song. I always thought it looked cool onstage, but you never know. [Laughs.]

PUGET: To this day, I think it’s the song that gets our fans going the most. For whatever reason, that’s become, from that early punk, hardcore era, sort of a quintessential song. I remember writing it: We were all living in this squat in Berkeley. It was a decommissioned frat house. We all lived there. There was this room we called the clayvet because it was like a cross between a closet and a cave, as if a tiny little room. We wrote a lot of Black Sails In The Sunset and a lot of this EP there. And I was sitting in there one night writing “Totalimmortal.” I don’t always remember where I was when I wrote a song, but I remember writing that. It was such a creative period for us, me and Davey [Havok, frontman] as a songwriting team. And everything flowed so quick and easy. And we just blast through that song. I just wrote it, you know, in probably like an hour.

BURGAN: That was a late addition. We were ready to record four different songs, one of which I had written that I was hoping was going to be on there. And then “Totalimmortal” came along, and I had to concede. It was such a strong song [and] so much better than the song I had written. And it was really unlike other things we had done up to that point. It’s interesting because it is so enduring. I mean, like you said, we included [it] in the setlist occasionally because it really resonates with a lot of people new and old. I guess we did a video for it, but it wasn’t like a radio single thing.

Was that song ever recorded?

BURGAN: Yes, it was “The Lost Souls” off The Art Of Drowning.

PUGET: Sometimes. [Laughs.] If I look at pictures of my hair [back then], I’m like, “Oh, that’s 20 years ago.” But being in a band, you’re in this weird suspended animation. So a lot of times it feels like everything happened yesterday.

BURGAN: I love that it’s just this little moment in time with all of its imperfections. When I listen back to all of my favorite early punk stuff, it’s rife with weird little mistakes and bad timing…And that’s what gives it the character, right? That’s what I love about it. You know, anything that seems like something I would want to fix later is perfect.

When the idea to reissue All Hallows was put in front of you, were there any trepidations? I know Mr. Havok is not fond of going down Memory Lane.

PUGET: I understand where he’s coming from. He never wants to be a legacy act, which is totally understandable. No one really wants to be a legacy act. I think that stuff like this, if the fans want it and it’s something they’re excited about, I’m excited to do it. If we were just trying to push some product out there to make some money or something and hope to exploit our older releases, that would be ridiculous and gross. And I would never want to do that. But I’m still proud of these things that we did.

It’s funny because I remember when we initially wanted to do this EP, we went to Nitro [the former label started by the Offspring singer Dexter Holland], and we’re like, “We want to do a fall, Halloween-themed EP.” And no one was into it. They didn’t want it. We had to push them to put this thing out.

Wow. What the hell were they thinking?

PUGET: I don’t know. In retrospect, it’s funny because then the Offspring started covering “Totalimmortal.”

The 20th anniversary All Hallows EP picture disc reissue is limited to 5000 copies. You can stream the AFI release here and grab your disc here.