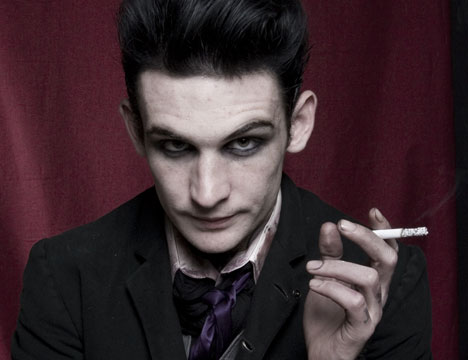 Rock Journalism 101 question: Why did you call the new record Knives?
I felt there were some things on the record that were harsh, that needed to be said to people. It’s not like, “Knives, yeah, to kill yourself with, man” or promote self-harm.

More like harm those people who have done you wrong. I think you’d rather form a cult to have people kill in your name.
Godammit. [Coughs.] Yeah! [Laughs.]

On this disc, it sounds like you upped the game on everything. The songs are louder and faster, and everything sounds a lot more trebly on the high end. In addition, the attitude that anybody-whether they love or patently despise Aiden-comes away with is basically, “Aww, fuck it.”
That’s exactly fuckin’ it. The person who put it best was the late comedian Mitch Hedberg. On one of his discs, he talks about being in the grocery store, looking in the meat aisle at all the turkey bacon, turkey balogna, turkey cheese, turkey-this and turkey-that. He finally says, “Turkey, why don’t you be yourself? I like you the way you are.” That pretty much sums up the attitude we wanted to bring to this record. Why am I trying to write songs that sound like New Order? Why am I trying to get out of what I actually am: a fan of the Misfits, the Damned and horror movies? Don’t get me wrong: My Chemical Romance and AFI are good bands that write great songs and have great careers. But I’m not inspired by Gerard Way. I don’t put on makeup because of Davey Havok; I put on makeup because my hero Dave Vanian does, Glenn Danzig did and [so did] David Bowie’s Ziggy Stardust [persona].

Knives seems like a reaction to your previous discs. For the last six years, it seems like you were emphasizing melodic hooks, whereas now, you’ve toned down that aspect of the band in order to focus on velocity and acceleration rather than the “call-out research hook,” so to speak.
I want to write songs where kids come to the shows and sing along and mosh. It’s sweaty, it’s fun and exciting. With this album, I just wanted to go back to basics and make a fucking punk-rock album–a dangerous punk-rock album. All the music that’s out in the scene today is so safe, generic and perfectly Auto-tuned. When the Misfits made a record, they went into the studio with one day, and that was the record. I’ve never been able to create the live experience of our shows on our records. On Knives, I really wanted try and create an atmosphere of being in the ’80s and making a punk-rock record. We recorded it in seven days and mixed it in five. I produced it, and I had the attitude of, “Fuck it. If that’s the best you can play it, that’s the way it’s gonna be.”

There’s some jarring stuff going on, like the spoken-word piece, “Portrait.” Where did that come from? “Portrait” was inspired by a friend of mine [who was] raped. It’s not her exact story; I lifted the theme of her story of waking up after blacking out and not remembering anything. It was a piece of poetry that I wrote and I had my friend Ryann Donnelly from Schoolyard Heroes read it.

You’re not going to be offered an Underoath tour anytime soon with “Crusafiction.” Is that an attack on Christianity or organized religion in general? [Laughs.] It’s more of a short story I wrote awhile ago that I turned into a song. It’s about a guy named Roman who was the brother of Jesus Christ. He’s come back to earth to tell people that Jesus wasn’t the son of God, but a made-up story by the emperor Constantine. Their mother was a prostitute and they were street kids. At the end of the song, you find out that Roman is actually the Devil, convincing people that this is the story. It is my attack on organized religion, especially on Judeo-Christianity as a whole. I feel very strongly about all sects of religion. In the end, there’s no religion-we’ve all been tricked.

I had an experience on the William Control tour, where I was talking to this guy I know about how I’m upset with the way the world is and religion. And one of the merch guys from another band on the tour told my merch guy, “Wow, that’s kind of fucked-up of him.” If I speak my mind about religion, someone has a negative view of me. But if I’m standing around going, “Yeah, I go to church on Sunday and I do it for Jesus Christ,” that person wouldn’t have those negative thoughts. There are people who feel the way I do, but they’re just silent.

You’ve said that nothing on Knives was inspired by your William Control persona, yet your vocals have a similar kind of swagger and confidence. I feel as if I finally have a voice, something to say and a platform to say it–and I don’t have anything holding me back anymore. I’m not trying to filter the material, and I know there are people out there who feel the same way I do about things. Secondly, I don’t give a fuck about getting songs on the radio or MTV. My shit’s not going to get played on the radio; I’m never gonna sell a million fucking albums and I’m not going to be a big, rich rock star, ever. I just want to have fun and play in a punk-rock band and sing whatever the fuck I want. I don’t like getting up in the morning; I don’t want to answer to anybody and I want to be able to say, “Fuck you.” [Laughs.] alt