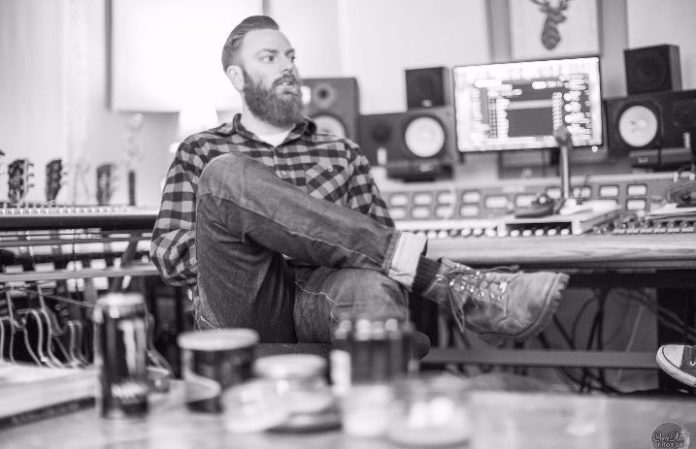 Producer might not be Alan Day’s expected title. Fronting Four Year Strong, Day is by no means a new face in music, but with his newest title as producer, he’s just starting to pick up steam.

“I have always pictured production being a path I go down for as long as I can remember. Writing and making music is the reason why I got into this whole thing,” Day explains. “It was a couple years ago where I just had this realization that if this is something I want to do eventually, why the hell am I not doing it right now?”

Nestled away in seemingly the middle of nowhere, Day built his own studio tucked away in the woods in Massachusetts. It’s here that Day has worked alongside some of the biggest up-and-coming names in the scene: Can’t Swim, Seaway and Knuckle Puck, to name a few.

It’s not “some fancy-schmancy studio,” Day explains, but it features plenty of great gear, and when it comes down to it, that’s exactly what these artists are looking for.

“Alan definitely provided a lot of insight in terms of songwriting, especially on Colour Blind,” Seaway guitarist Andrew Eichinger says. He explains that the band spent two weeks at Day’s studio jamming, writing, experimenting and building on existing music for their newest album, Vacation. Three songs came out of those sessions—“Neurotic,” “Lula On The Beach” and “Scatter My Ashes Along The Coast, Or Don't.”

They also happen to be three of the biggest tracks on the record so far.

“His attention to detail and love of amps, pedals and guitars is also amazing,” Eichinger explains. “In a world where fake amps are becoming more and more of a thing in the studio and also in a live setting, it's nice to work with someone who really gives a shit about the real thing.”

“I think he's very adamant about getting the best ‘performance’ rather than the best ‘take,’ LoPorto says, “meaning, if the part you are recording maybe wasn't perfectly in time or in key, but the heart was in it, that's what he was looking for. He explains that when they were working with Day, he caught certain things they would have looked over, and in the same vein, found strength in parts they struggled to find very good.

“It was nice to meet someone who is just as passionate about his own band as he is producing another band,” LoPorto says. “He is very capable of hearing the potential in something, and then making it come to life.”

And for Day, that’s what it’s all about. Since his start with Four Year Strong back in 2001, Day has truly been through it all. Figuring out how to balance sounding “too similar” or “too different,” understanding the tensions that can keep bands from producing their best work and realizing that sometimes all you need is that outside perspective to take your song from great to even better are some of the biggest lessons he’s learned. And he’s ready to impart those life lessons to the bands he works with.

Talking through his production process, Day explains it as a kind of an “outsider looking in” mentality. For him, it’s about finding a way to take all the “awesome material” someone else has written, combine all the ideas together and turn a song into everything it could be. It’s about providing that sense of comfort and understanding when there’s confusion about what that next step should be. And for Knuckle Puck, as they headed into the studio to work on Shapeshifter, the band questioned just what they wanted their newest release to be. “We had to realize that we can't rely on other people to help us do what we do better than we do it, because no one is our band,” Knuckle Puck frontman Joe Taylor says.

“And that's something Alan helped us realize,” Knuckle Puck guitarist Kevin Maida explains. “It was cool getting to spend time with him because we're all fans of Four Year Strong. It was cool hearing his perspective on songwriting and being in a band in general.”

Being in a band is what Day knows best, but that’s not to say he hasn’t learned from the bands themselves. Working with such new talent is an experience that’s been eye-opening for him. He laughs, explaining that he doesn’t want to sound like “an old man now,” but through working with some of the most dedicated up-and-comers, he’s reignited some of his excitement for music.

“It’s inspiring for me to be working with younger bands,” Day says. “I’ve definitely been doing it a long time, and it’s inevitable for anyone who does any job to become a little jaded. It’s inspiring to see these younger bands and how passionate they are. It gets me more excited.”

And that excitement is fueling him as he looks ahead. He talks through his goals, most obviously being making more and more records, but it’s about more than just making records—it’s about finding new ways to keep things original. With a solid few releases under his belt and no sign of slowing down, it’s clear he’s just getting started.

“We always get to places where it’s like, ‘We’ve been there, done that, what else can we do? How can we keep things fun and exciting?’ And as a producer, it’s the same thing,” Day says. “I want to work with like-minded individuals that just want to make great music and have fun.”