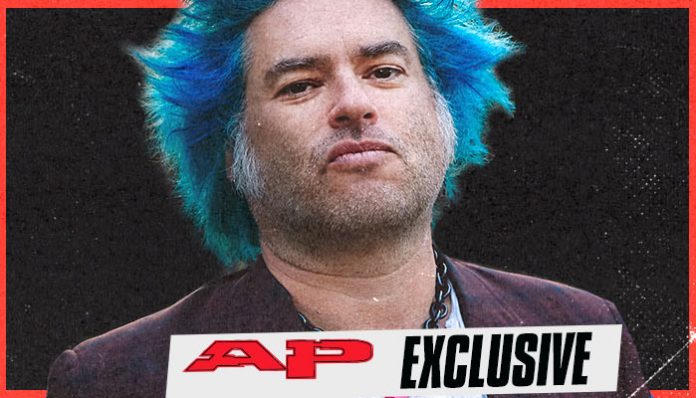 Fat Wreck Chords has established itself as a bona fide institution of punk rock. Co-founder Mike Burkett, better known as Fat Mike, has been stamping his seal of approval on your favorite records since 1990. Having the Fat Wreck logo printed on the back of an album supersedes any traces of record label vanity. Instead, the crudely sketched, girthy rendering of a thick vinyl record immediately tells the listener what they’re in for.

Be it the pure-treble intensity of Against Me!’s As The Eternal Cowboy or the snotty skatepunk of Lagwagon’s Hoss. The glorious, glib protest of NOFX’s The War On Errorism or the lyrically unmatched, acutely frenetic How To Clean Everything by Propagandhi. Whether it’s the acid-brain-splitting fury of Direct Hit! or the incredible cover songs pumped out by Me First And The Gimmie Gimmies—one thing’s for sure. When Fat Mike releases a record that becomes one of your favorites, it really means that it’s one of his favorites too.

Read more: The Bring Me The Horizon and YUNGBLUD collab “Obey” is finally here

Fat Mike recently chose the 30 most important releases in Fat Wreck Chords history in an APTV exclusive interview. This celebration of the label’s 30th anniversary is a must-watch for anyone with a Descendents tattoo or Joey Cape lyrics perpetually stuck in their head. Reminiscing over the bands he talked out of breaking up and the moment he got John Kerry into punk—Fat Mike holds nothing back. He tells the story behind the quasi-obscure Closet Fiends EP that will surely slice your heart to ribbons. Burkett opens up about the songs that are too painful to perform and the favors he called in to rock against former president George W. Bush. He talks about every punk-rock tragedy and underdog triumph in Fat Wreck history.

However, there was one story that was cut from the interview. In the interest of reveling in what could have been, we asked Burkett which non-Fat album he wished could have been on his list. In this deleted excerpt from the video, Burkett reveals the album he thinks should have been a Fat Wreck release. Conversely, he divulges which legendary pop-punk band he surprised by turning down.

Over the past 30 years, has there been an album put out by another label that you thought to yourself, “Fuck. That’s a Fat album. I should have produced that record, or I should have put out that record.” If you could choose just one, which album would it be?

FAT MIKE: The Lillingtons’ Death By Television. I turned that record down. I listened to it more that day, and I called them back the next day, and they said, “Sorry, we already signed with someone else.” [Laughs.] The Lillingtons’ Death By Television. Best pop-punk record. There’s so many records I wish I would’ve put out, but I’m pretty happy with the records that Fat Wreck Chords has put out. Especially this year. This year, I produced five records, and I’m so happy with all of them: Get Dead (Dancing With The Curse), the Bombpops (Death In Venice Beach), Bad Cop/Bad Cop (The Ride), Days N’ Daze (Show Me The Blueprints) and Mad Caddies‘ cover album (House On Fire). I produced that and NOFX stuff.

When you hang up Fat Wreck Chords and you’re not doing this anymore, how do you want people to look back on this label?

Fat Wreck Chords, as I said, is a label of bands I like. I never really sign bands for the money. There’s been tons of bands that I turned down that were so surprised. I turned down New Found Glory. I’m like, “I’m sorry. I don’t want to put out your music.” You guys are bros, but you’re not a Fat Wreck Chords band. You got to have something that I like. Fat Wreck Chords is bands that I like and that I chose to be on my label as friends and family and as musicians and artists. We’re not a label that centers on business at all. It’s just about the music and the people.

The Lillingtons released Death By Television through Panic Button and Lookout! Records in 1999. It has since earned a reputation of being one of the most important and beloved records in Ramones-core pop punk. The rights to the album were later acquired by Red Scare Industries in 2005. In an interesting twist of pop-punk kismet, the Lillingtons singer/guitarist Kody Templeman joined pop-punk outfit Teenage Bottlerocket in 2004. The Lillingtons broke up after releasing 2006’s The Too Late Show, and Templeman shifted his focus to Teenage Bottlerocket. Bottlerocket released two LPs through Red Scare Industries [Total and Warning Device] before signing to Fat Wreck Chords. TBR’s Fat debut, 2009’s They Came From The Shadows and 2012’s Freak Out!, feature some of Templeman’s finest non-Lillingtons work.

TBR signed to Rise Records to release 2015’s Tales From Wyoming but returned to Fat with the 2017’s Stealing The Covers. Fat Mike also nabbed his white whale by signing the reunited Lillingtons and releasing Stella Sapiente in 2017. Death By Television was re-released as a 2019 Record Store Day title by Red Scare Industries. This rare picture disc is limited to 666 copies and commemorates the record’s 20th anniversary.

The Fat Wreck celebration will continue Sept. 19 when NOFX play their first show since the beginning of the COVID-19 pandemic. Performing their album White Trash, Two Heebs And A Bean from Burkett’s backyard, the live show will be streamed on No Cap.

“Tickets are on sale now (link in bio) for you to see NOFX perform their album, White Trash Two Heebs And A Bean, in its entirety for the first time ever!” the Instagram post states. “Catch them virtually from Fat Mike’s backyard on September 19th at 2 PM PST. Grab an all-access VIP pass to hang with the band after their performance as cameras roll well into the night. You’ll be treated to a trove of unannounced guests, performers, comedy, campfire stories, and more!”

Tickets are on sale now (link in bio) for you to see NOFX perform their album, White Trash Two Heebs and a Bean, in its entirety for the first time ever! Catch them virtually from Fat Mike’s backyard on September 19th at 2 PM PST. Grab an all-access VIP pass to hang with the band after their performance as cameras roll well into the night. You’ll be treated to a trove of unannounced guests, performers, comedy, campfire stories, and more! #nofx